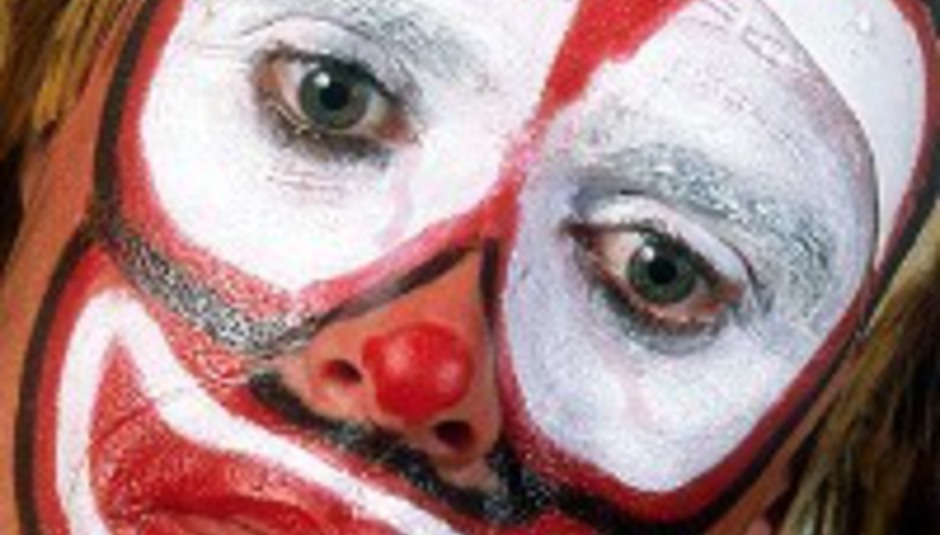 If the charts were a noise this week, they would be the squeaky rasp of a slowly-deflating balloon at a child’s birthday party where a gin-reeking dad has just attacked the clown on suspicion of ogling mummy’s breasts. In short, it’s going to make children cry. In fact, it’s not much of a noise at all really. Soon the charts will be detectable only by dogs.

For now, however, Sugababes continue to live it up at number one in the singles charts with ‘About You Now’, while 'Goodbye Mr A', The Hoosiers’ direct rip of ELO’s ‘Mr Blue Sky’ thrusts its horrid wares in at 5. Mika climbs 13 places to 16 with ‘Happy Ending’, and much as we hated the helium-voiced irritant as a purveyor of strained wackiness, this is just dull, dull, dull. Meanwhile in the most irresistible rise since the Nazis first swept to power in nineteen-thirty-whatever, Phil Collins climbs to 14 with ‘In The Air Tonight’. Unbelievable. At least if you snapped up your copy a few weeks back you could be first among the office jokers, now you’ve just got all the retards schnaffling up the remains like sick from the previous night’s party.

Indie-come-latelies The Wombats’ say hello at 35 with ‘Let’s Dance To Joy Division’. Their YouTube video prompted one observer to comment "makes me as happy as peodo in a nursery", which just goes to show if there’s one thing funnier than the rape of innocent children, it’s the misspelt rape of innocent children. Speaking of which, the song features loads of the little blighters, in a baffling choir appearance on this catchy but improbably nauseating ditty.

No doubt you’ll thrill to the news that Roisin Murphy’s ‘Let Me Know’ is a so-so Quincy Jones-ish r ‘n’ b number that goes in at 28, and Biffy Clyro go sniffing her perfume-scented arse one behind at 29 with ‘Machines’. And let’s not forget The Hives, who dig deep to find yet another variant on Jurassic themes at 41 with ‘Tick Tick Boom’.

Over in t’album t’charts, Bruce Springsteen falls off his number one perch, sliding three places to, umm, four with Magic. He’s usurped by Katie Melua (#3) and two new entries in Sugababes (Change, #1) and God, aka Eric Clapton, who feels Complete at numero deux. Yer Man Peñate goes in at seven with Matinee, Babyshambles drop eleven places to 16 as everybody realises what a crashing bore Shotter’s Nation is, and Beirut’s The Flying Club Cup arrives to slightly muted fanfare at 69.