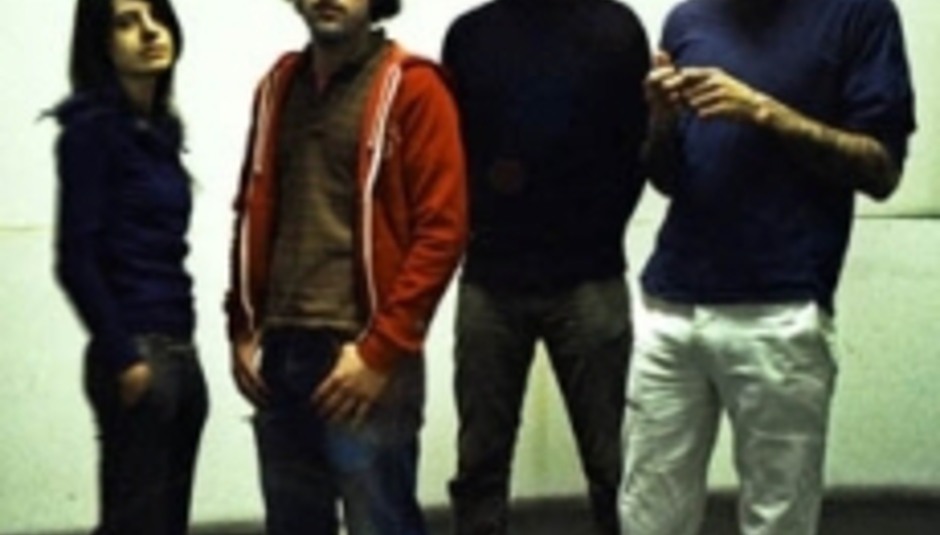 Cyann & Ben are the best musical wet dream you’ve never had, yet. They’re French, seductive like a fine fragrance lingering in the wake of a fantastically beautiful belle of the ball, and they’ve earned themselves comparisons to acts as diverse as Low and Sonic Youth. They’re entirely likely to leave the unsuspecting listener in a sticky, gooey mess come the release of Sweet Beliefs, the quartet’s first-ever official UK release.

Yes, you read that right: quartet. The name’s a little misleading, as while there is indeed a Cyann (vocals, keyboards) and a Ben (vocals, guitars, keyboards) in the band, the pair are ably assisted by full-time members Loïc (guitars, keyboards) and Charlie (drums, sampler, keyboards). Together, the four craft delicate post-rock passages that explode like Roman Candles – brilliant and beautiful, yet dangerous and burning to the touch. Theirs is a music capable of levelling entire cities given amplification enough, yet it could also soundtrack the re-establishing of nature where once said city stood.

“I don’t think we’ll ever find a word to describe our music,” says Ben. “I like to talk about ‘Space Rock’ just because it sounds good. Our music comes from many horizons: sometimes it’s fragile, sonic, pop, folk, proggy, psychedelic. It’s not addressed to any audience in particular. Our music can find its audience in many styles. That’s the way that we imagine it, and how we build it.”

“We don’t like to describe our music,” adds Charlie. ”It’s not our job. We’ve been labelled as a post-rock band, prog-rock, psych-folk, indie-rock, experimental pop… All those words mean nothing, but at the same time they are not completely wrong. It’s such a blend of influences. I think that we have our own personal sound and identity. Maybe that’s just because we don’t really care about music fashion and styles, and we’re just trying to play the music that we would like to hear.”

Sweet Beliefs arrives on UK shores in September – its predecessors, Spring and Happy Like An Autumn Tree, never impacted upon British radars though, mainly due to there being no official releases, but in the States Pitchfork picked up on the former. An 8.4 score on the site is no small achievement, and writer Nick Sylvester stated that Paris-based Cyann & Ben produced “a rare strain of ‘epic’ music, where bravado does not exceed the composition, but remains at all times within it”. You wanted another recommendation, an alternative point of view? You got it.

Cyann & Ben have also collaborated with a member of another Pitchfork-approved act, Espers (who, coincidentally, were also awarded an 8.4 score for their self-titled debut). The Philadelphia-based folk outfit’s frontman, Greg Weeks, appears on the song ‘Sunny Morning’, the lead track on the French band’s pre-album EP, The Sunny Morning EP (DiS review).

”We have been in touch with Greg for three or four years,” explains Charlie. ”When we released our first album, Spring, someone made us listen to Awake like Sleep, Greg’s third solo album. It was like we had found someone who was trying to reach the same universe as us. It was so close! We sent our record to him and he enjoyed it a lot. Since this day we have had a lot of plans together – recordings, European tours… He even made us sign to Locust in North America, the label who signed Espers a while before. He’s busier now, due to Espers’ success, and we haven’t had time for the projects planned… Aside from this recent collaboration!”

“We considered asking Beyoncé, but she wasn’t available,” adds Loïc.

France, although so very geographically close to England and its varied and vibrant music scene, has always seemed like a limited market to Brits. Just how many superbly successful French exports – musical exports, not cheese or wine or whatever – can you name? Cyann & Ben don’t feel as if they particularly fit the mould of a popular French act – they frown at the nation’s tendency to discriminate against English-speaking domestic bands, and recognise that few big French outfits transfer their recognition into overseas markets.

“We don’t feel very comfortable in the French music scene,” says Charlie. “There is a good indie-rock underground here but, generally speaking, if you want to leave the underground nobody trusts you. Bands have to sing in French and change their music if they want to be played on the radio. All the French bands that do work outside the borders, in any style – Phoenix, Herman Düne, Tahiti 80, M83 – are still smaller in France than everywhere else.”

He continues: “I think that music in UK is something natural for people, it looks like it’s part of everyday life. That’s not the case in France, the audience for our kind of music is more intellectual, and sometimes they seem to think too much instead of just feeling the music.”

---
"It seems that in France, if you don’t accept the codes imposed on you, you have to stay at home waiting for the rain."
---

“Our music is directly bound to the UK music scene,” says Ben. “It seems that in France, if you don’t accept the codes imposed on you, you have to stay at home waiting for the rain. We’ve always listened to English music, so it seems to be so natural to give our music a chance there.”

The label that’s taken the plunge and committed to releasing Sweet Beliefs on this side of the Channel is Ever Records, whose Cortney Tidwell has also attracted many a column inch of acclaim (click here for DiS’s interview with the Nashville singer).

“I hope that having a footing in the UK music scene will help us to promote our music and to allow more people to listen to it,” says Charlie. ”It’s a very important step for us. The UK is the country of music - that’s the opposite of France, and it’s exciting to see how people there are going to appreciate our music. The UK isn’t the only country concerned, as this album will have a worldwide release, which means a lot of new adventures.”

Ben concludes proceedings: “Thanks to Ever and the new horizons offered to the band. It’s like a rebirth.”

Sweet Beliefs is released via Ever Records on September 11. The Sunny Morning EP is out now, also on Ever. Cyann & Ben play London’s Legion on September 28. Their website/MySpace page can be found here.