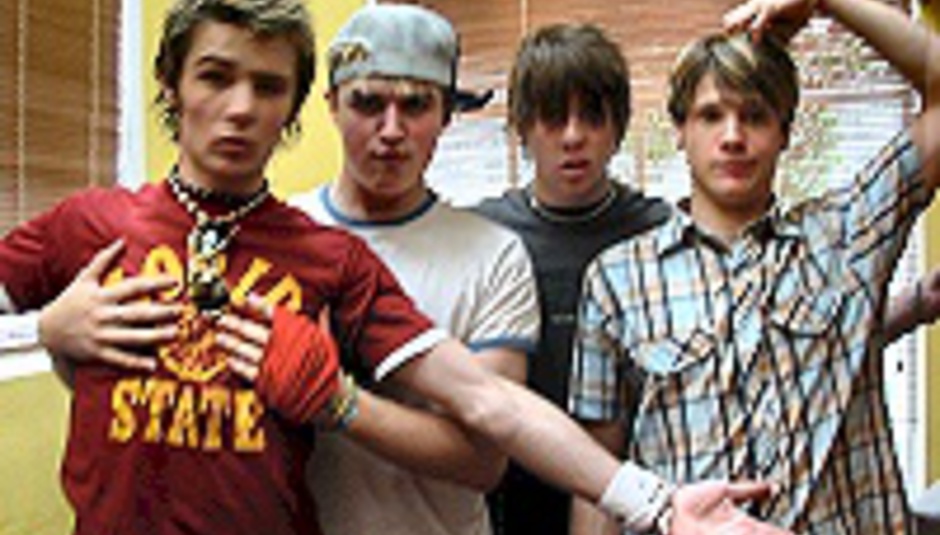 by [redacted] June 4th, 2004
It was easy to find Island Records’ office due to a gaggle of girls – and it was ALL girls – slouched outside. They’re the special ones, I’m told, street-teamers being repaid with an exclusive album playback and a meet ‘n’ greet with the band.

The band in question is McFly, four boys propelled to stardom with the single ‘5 Colours In Her Hair’ which went straight to No. 1 in March. It’s a song which was written after a heavy bout of Beatles-listening. And it is in fact said mop-top band staring up at your correspondent from the floor of a messy room, pictured on the cover of a five-month old copy of Observer Music Monthly – “Finally, the inside story of how The Beatles conquered America.”

It's been heavily documented how The Beatles learned their graft the hard way playing the Hamburg clubs. On the flip-side of the coin, McFly’s industry connections and the way their band was pieced together by Busted’s management, Prestige, has had its fair share of column inches over the last few months. So it is here I sit now talking to the “four normal teenagers” about, well, music… that’s after we manage to prize Dougie away from staring at the Blink 182 CD they’ve just nicked, and after DiS scares them slightly with the retelling of a ‘fanfic’ posted on their messageboard which involved two members of Busted in a gay relationship, and ended with one member of McFly pushing Busted off the top of a building or something. “I don’t like the sound of those fan fictions,” shudders Dougie. “I just like the short little messages that say ‘Tom is wonderful’,” says, er, Tom. Obviously.

Conversation turns to gigs they’ve been to recently…
T: “That’s the good thing about being in a band – you get free tickets.”
Have you ever tried the don’t-you-know-who-I-am routine?
H: “I did, and he didn’t. So I was like, ‘fair enough then!’”
Seen any bands recently you’d recommend?
T: “Incubus were SO GOOD.”
H: “Foolproof. Their single is out on the 14th of June (on Island Records. Convenient!).”
Do: “If you’re into The Used and stuff like that, it’s wicked.”
H: “It’s really really cool.”
T: “And they’re funny guys too.”
What can we expect from your album?
H & T: “Some songs.”
That’s handy.
Da (with pride): “A few lead solos!”
H: “It’s quite varied but with a ‘60s style. But it’s not like any rip-offs.”
Da: “With the album we’ve got the ‘60s thing but when we play live we’ve got the Marshalls and Mesa Boogies and just whack it out.”
H: “It’s quite different live. So if you wanna try and check us out live, that would be cool.”
When are you next on the road?
T: “We’re doing the summer road shows, and we’ve got the big Olympic torch gig in front of Buckingham Palace…”
Do: “Which will be on TV.”
T: “… It’s in front of 70,000 people.”
H: “Playing live.”
T: “That’s the only problem being a pop band now is that with all the TV you do they want to make you mime. They don’t have the sound systems to set it up and stuff.”
H: “Yeah, and that’s when the main public see you so they automatically think we just mime.”
T: “So when you do get to do TOTP live people realise ‘oh, they CAN play’. You know, if we ever get the option to play live, it’s always YES.”
Got a message for our readers?
H: “Check out the album. It’s cool. Just give us a chance.”
Do: “If you still don’t like it after hearing the album, fair play.”
H: “And PLEASE buy our second single!”

The single ‘Obviously’ is released on June 26th. Their debut album, ‘Room On The Third Floor’, follows on July 5th.