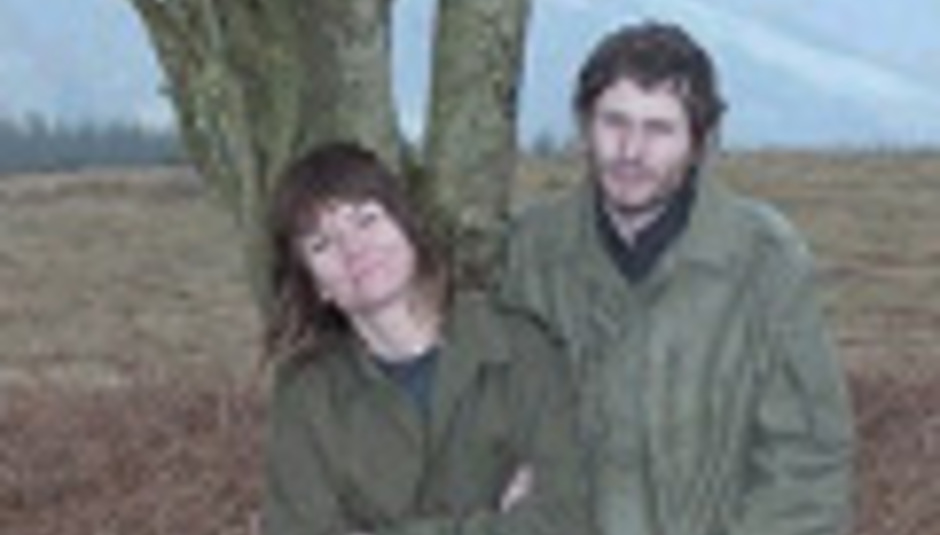 by Chris Hilliard September 30th, 2003
The August bank holiday is famed for that annual shindig of sex, drugs and bad pies - the Reading Festival. This year though it had a rival for the indie youth’s affections. Far, far away from the plains of suburban Berkshire, up in the wild, woolly backwaters of the Brecon Beacons, several hundred faithful gathered to celebrate the first inaugural Green Man Festival. Granted, the five hundred number attending probably wouldn’t have had the Mean Fiddler Group quaking in its loafers, but from such small beginnings etc... Away from the raucous rambunctiousness of several dozen thousand fifteen-year olds spewing snakebite back forth, the Green Man festival was probably a far more genteel affair. Not for them the greasy clang of the Black Rebel Motorcycle Club swamping across the headline slot, festival organisers it’s jo and danny opted instead for such not-yet-but-no-doubt-soon-to-be household names as The Playwrights, The Memory Band and The Mountaineers. The Brecon Beacons, not a regular feature on most artists’ tour itineraries, the couple decided to bring the music to their idyll, which as Jo found was one mighty task. “The last year has been the hardest I think Danny and myself have ever worked. It feels like we’ve been doing three jobs each, but it’s been really, really worthwhile. It has been really worth it.” From their previous incarnation as a major-friendly chirpy duo, the couple have now been reborn as paragons of self-sufficiency. “We finished with BMG about two years ago so after that we set about getting our own label back up and running, Double Snazzy, just to get our new album out. Then we were realising that we just had time on our hand on that stage and Danny came across the idea of doing a festival.”

Eschewing the typical choice of an abandoned airfield or litter-strewn municipal park, the folky sounds were set to reverberate the considerably more decadent venue of Craig Y Nos Castle, a choice that seemed to catalyse events. “Once we got the proper location over at the castle, everything got its own energy and we realised at the same time we could do a compilation album and put it out on Double Snazzy, which he now had up and running again. Then we signed Christine X for Double Snazzy as well.” Morris dancers needed marshaling, cake stall holders needed courting, in all Jo seems to be well and truly exhausted by what has been a frenetic summer. “It got really full-on craziness about three weeks before the festival. We thought we’d be able to take a break now, but now there’s all the loose ends and all the accountant work as it winds down. Also, we’re already thinking about next year’s festival. It’s probably taken us by surprise how much work there is involved, but at the same time, it’s also been massively rewarding.”

Equally as rewarding, it seems, has been the resurgence of their label, even in such uncertain times for the record industry as now. “Even in the couple years since we’ve had Double Snazzy going, the whole music industry has changed so much in those two years.” And from being the artists themselves, who can forever let the label lackeys do the form-filling, the two now have to be all-round music biz impresarios, as deft at dashing out a three minute ditty as sifting through a stack of demos or eyeballing the inland revenue. A schizophrenic state of affairs? Well, maybe not. “With the day-to-day running of the label, there’s not too much to be honest with you. At the minute, we’re just keeping our ear to the ground for any new artists. It’s funny because you do have to say as Double Snazzy label people ‘it’s time we have to put it’s jo and danny back in the studio’, we have to wear different hats.”

So, if running a record label actually isn’t such a monumental battle with snowdrifts of receipts and invoices... erm, why did they sign on the dotted line with BMG in the first place?“I take that as being my fault. As an artist, I always wanted to know what it’d be like to be on a major label and it had its moments, but it’s a big ego world. Every now and then you got your ego shone up very nicely when you’re in Paris and you’re being picked up from the airport by a limo and you’re being driven over to their offices. It’s quite fake basically the whole thing of it.” Fake, but fun maybe? Anyway they know better now, even if it has taken them a while to get back to the more earthy reality they have up in the mountains. No regrets then? Well, perhaps one or two. “When we did Lank Haired Girl, we got lots of press and Jo Whiley was playing it on the daytime radio one and we were offered a deal. We were completely and utterly broke at that time. If we had the money in the bank, I think we would’ve had the strength to say no. If we had said no at that stage, I think we would be in a stronger position now, but it’s always the brave long-term view to not accept money when it’s offered you, but unfortunately we took the short term view and took the money.”

Double Snazzy, initially just the outlet of their music is destined for bigger things. Whilst they may now shy away from the idea of somebody else steering their career, the prospect of a snazzy roster for themselves does hold an appeal. “We just did a tour and so we were checking out the support bands all the time and we were putting out words with the promoters asking if there were any decent bands in the area. As a consequence, we’ve had four demos that are really, really good. At the minute, we’re not quite in the position to put those ones out, we’ve got to wait for a bit of income to come in until we can do justice to any record we put out on Double Snazzy, but we’re looking to maybe in the New Year talk to people about putting an album out on the label.” With their laid-back and friendly ethos to life, one can imagine there’ll be little terror in the boardroom, it’d hardly be in keeping with the music. “We are looking for artists that are quite similar to ourselves. We’re really excited by this whole so-called folktronica thing that seems to be taking route. Folk or folktronica or pushing the boundaries or however you want to describe it. We didn’t know we were in any scene. Once we got dropped by BMG and came back here to our place in Wales and holed ourselves up while we were writing the new album and we didn’t realise there was this whole scene starting to develop and it was only when we started putting together the acts for the festival and then there was a full-page feature the Friday before the festival written by Bob Stanley all about this whole new folk scene saying it was the most cutting edge it’s been since Bob Dylan in the ‘60s.”

So, if Bob Stanley’s right... and when is he wrong? Well apart from that haircut... the Double Snazzy brand may soon be plastered across many of your favourite record sleeves, well as long as Jo gets to do the fun bits. “Danny’s got a really good business head on him basically so he tends to take care of most of the business side of things. We work quite well as a team like that. I’m the one who gets on the phone and gets the initial contacts done and then he’ll take care of what I consider the more boring things!” And even the boring things are more fun things when they’re your own boring things, apparently. “When you have an idea when you’re on a label by the time it comes out, it’s not the idea you had in the first place because it’s had to go through so many people and so many accountants that when it comes out the other end, it’s this other thing and it’s got your name attached to it and you think that’s not quite how I envisaged it. When you’ve got your own label, if you have an idea, because needs must, it’s actually more fun when you’ve got no money.”

Blessed as they aren’t with the huge promotional budget of a major label, the pair are ever so aware now of how having such backing can colour your experience in the record industry. “When we were signed up, we’d do a gig in London and the gig would be sold out, but looking back we now know that some of those tickets were being bought by the record company. It feels like your profile’s higher, but it’s all a sham.” With the less of the necessary readies to spread out, battling to make a name for yourself is a more considerable challenging. Word of mouth, the pull of morris dancers, Double Snazzy have to do pretty much whatever it takes to compete with the big boys in the reviews sections. “There’s no doubt a band will get an extra star because the journalist knows there’s money behind it and they’re not going to have egg on their face. An album that genuinely deserves 3 stars if they give it 4 stars, there’s going to be a whole marketing campaign behind it and it’ll look like that the band is good and that this magazine was good for tipping them.”

Really though who would want that mixed-up lifestyle of a major label artist, swishing champagne at Soho House surrounded by flunkies, when you’ve got what these two have got. A cramped Camden flat with cockroaches crawling across the carpet or your own picture postcard paradise in Welsh valleys? Not such a tough choice. “We’d been living in London for close on 10 years I think it was and just felt we’d been there, seen there, done it kinda thing basically and fancied getting a bit of the mountain air in our lungs.” Now, there’s no going back. “If we were offered a deal again at the minute, we wouldn’t take it because of the freedom we’ve got and the building up we’re doing with Double Snazzy is so much more exciting.”