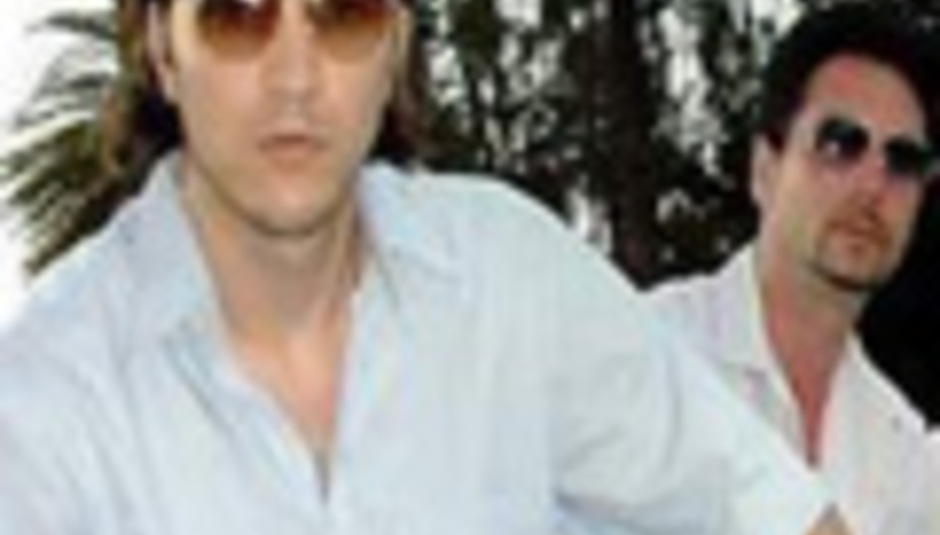 Fresh from a two year sabbatical, spent snowboarding and lounging in the Hawaiian sunshine, those most noo-yoik of New Yorkers, The Fun Lovin’ Criminals are back with a mighty fine platter, rhapsodising as usual about their favourite subject matters: girls, partying and their hometown. On first glance it seems a good lifestyle, on second glance, you’ll want a piece of that yourself. Anyway, enough of my yakking… over to Fast for the sales pitch. “It’s called ‘Welcome To Poppy’s’. It’s comes out September 8th. It’s got fifteen rock-roarious tracks about life in New York City and we hope everyone buys it.” As one would imagine, tearing Fast and Huey from their roots would be no easy task, they probably bleed the Hudson River. With that in mind, the new record is not only about Big Apple, but was made there, in a city that has been quite literally rocked to its foundations of late. “We recorded the record in New York City in the same studio we always record at, which is the Magic Shop. A lot has happened in New York in the last couple of years, it’s gone through many changes, the city’s got a little rougher.”

In such troubled times, the comforts of home bring a new kind of allure and whilst ‘Come Find Yourself’ may have been a quintessential sound of New York, the new LP may even taste a little like it, or so thinks Fast. “’Welcome To Poppy’s’... P-O-P-P-Y... and that is a great little restaurant on the west side of Manhattan around from clubs and rehearsal places we worked at and it was open all the time so you could walk a short distance and get a burger, something good like that.” Not for them some prefab Hollywood macro diet, Fast knows what he likes, a juicy slab thrown down on the griddle is just the thing to get the creative juices flowing. Huey’s methods are seemingly though a little more unorthodox, or so claims his band mate. “We can write songs together at the studio. I’ll write at my studio in Brooklyn, he’ll write on the toilet.”

Aside from all their ablution inspirations, despite being without a record deal since they parted with EMI (they’ve recently inked a deal with Sanctuary), the boys have not rested on the laurels and in between the partying, have mode into whole new creative arenas. At a cinema near you soon... “There’s one Irish film called ‘Headrush’, which is a little Irish gangster film. Huey’s actually in that film as a transvestite drug dealer, he has a pivotal role in this film, along with his henchmen Winston and Dermot, who are both in fact very gay in the film.” I never quite muster the nerve to find out quite what he deems to be ‘very gay’ and just well... gay, for possible fear of being whacked (with or without the aid of ‘Scooby Snacks’), but I do gather from his tone, that Fast is one big film buff, even if the concept for ‘Taxi Driver 2’ is at best optimistic. I just don’t see him carrying off that mohican look.

The criminals have though masterminded a few little projects, even if De Niro isn’t knocking on their doors just yet. “We made our little Maui homicide film. We wrote a whole soundtrack for that, four or five songs, that was pretty funny, a joke slapslick funk blaxsploitation soundtrack. We’re trying to get more into films.” I don’t imagine these’ll be Lithuanian art-house pics either, but proper boys stuff - like crime and coke and curves and hey, they may just make Scorsese proud. “We figure we can make our own videos and make them look good, so we’re good enough... though we’re not that good!”

Bizarre gardening accidents aside, the guys are rapidly joining the ranks of Spinal Tap in their ability to lose drummers. Original tub-thumper Steve parted company with his cohorts, to be replaced by Mackie and now, well where the hell is Mackie? “He joined a supergroup of all the best hardcore musicians and friends of his from New York joined the dream team of all hardcore bands. It’s called Hazel Street and he plays in AM60 as well. He’s kinda busy touring and releasing records. We were getting set up for big tours and sh*t, so we needed somebody to commit and our boy, the Rhythm Master, was the one who stepped in.” The wild showbiz roundabout of constant partying, the incessant hedonism, the whole being pursued by legions of supermodels, it’s a hard job, but somebody has to do it... dammit, if I’d only given them my number or had the faintest idea of how to play drums well or look cool in a suit. So maybe I’m not cut out for the gig, but this time they think they may have finally found the man who is. “This one claims he’s here to stay, Frank the drum machine from Leicester, England. With Mackie, he was a quite man, who kept himself to himself, god bless him, so if you ever could isolate the microphone from the shows, it would probably just be him whispering and making grunt noises.” Now new recruit Frank, he likes to party, he’s an entertainer, but he is from Leicester. Have the Fun Lovin’ Criminals landed their greatest challenge, how to make even Leicester sound cool?