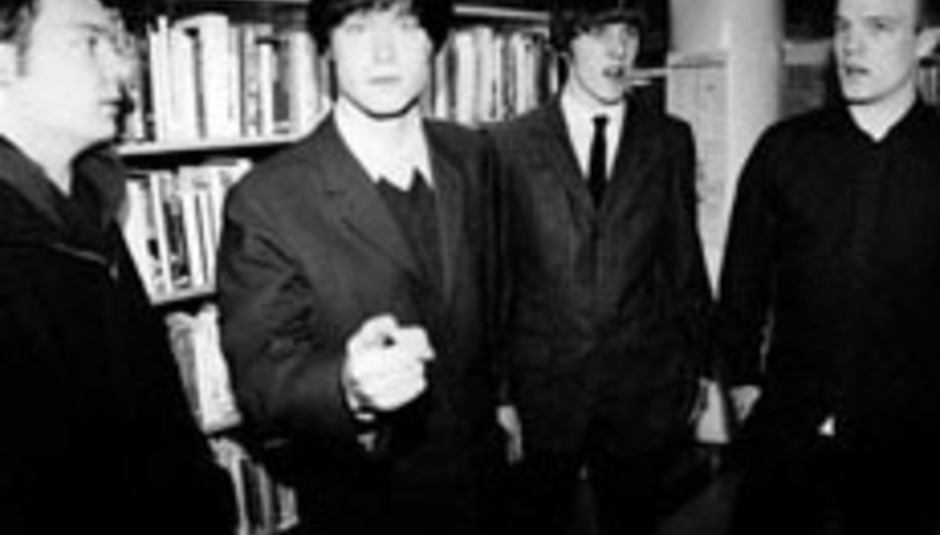 “They told me that the classics never go out of style…”

Refused’s The Shape Of Punk To Come album is approaching its tenth anniversary; thus, those that wisely invest in the record today are almost certainly younger, significantly, than those that can recall the Swedish quartet’s breakdown in 1998. Written at a time of heightened tension within the group, the album not only proved to be the band’s high watermark but also one of the most celebrated exhibitions of punk-slash-hardcore song writing ever committed to tape. Only recently the twelve-track lesson in genre-eschewing was voted the thirteenth most important album of all time by Kerrang! magazine.

Of course, the album’s primary appeal stemmed partially from its almost contradictory title – although ‘punk’ was something Refused certainly began as, by the time of their swansong many a generic idea was being sidestepped for the mining of what was becoming an ever-richer vein of compositional creativity. The whole point of the project seemed to be that the shape of punk’s future was to be manipulated by the incorporation of styles from across the entire spectrum of contemporary music. Therefore, songs drew upon traits most commonly found in jazz, and utilised quasi-classical craft to create a truly vivid bigger picture; lyrics, too, sought to enlighten and educate, however vehemently they were screamed. The result of simmering in-studio hostility was a record that truly pushed the boundaries of expectation, one that was punk in spirit for sure but that was as comparable to the band’s so-called genre-bound peers as Mozart is to The Pussycat Dolls today.

Without delving entirely into the band’s history – the whole point of this feature is to promote the new Refused Are Fucking Dead DVD, a compelling document of their eventual disintegration – it’s okay to state that when they came to tour their climactic long-player, relations weren’t entirely hospitable. Their final show – in a basement at some small town in the US – was cut short early by police officers; there and then, Refused were over. Drummer David Sandtröm was already essentially out of the band, and the other three members – vocalist Dennis Lyxzén and guitarists Jon Brännström and Kristofer Steen – were absolute shells of the men they’d been only a year earlier. Enough proved to be enough, and the band split – Refused Are Fucking Dead, directed by Steen, retells the band’s final few months using archive footage and new interviews, offering an insider’s view on the deterioration of one of punk’s greatest-ever outfits.

Steen kindly took the time to answer some questions about the DVD, and about Refused’s final actions and reactions, posed by DiS.

This DVD seems to have been a long time coming – I recall reading about it some years ago, and that it was originally scheduled for a 2004 release. What has held it up?
The main issue was to find out what the film was about. Once it was established that the piece would depict the break up of Refused, it took about a year for me to finish. Burning Heart put up new release dates to light a fire behind my arse.

You must have relied on fans for a lot of the footage – did the accumulation of this material take a lot of time?
Most of the footage that was sent over to me was live material. Somewhere along the line I realised that I had to reply on other things in order to make a film that would move dynamically. In a way, I guess it helped to watch countless hours of forgotten shows. That kind of footage just didn’t get my blood to boil. Then it simply dawned on me that I should rethink and not feel so restricted by the material that I had accumulated at that point.

When, exactly, did work on the DVD begin? How long a cooling-off period did you need? Was there a time when you couldn’t go back to Refused matters at all, after the split?
I started in April 2003, which means there was a four-year cooling-off period. I didn’t really feel a great desire to go back to Refused. When the band was done I was fine with it being over, and done with it. However, the challenge to make a narrative-driven piece on a punk band was interesting enough for me to pursue.

The DVD focuses on the band’s activities after the release of The Shape Of Punk To Come – has that record’s longevity surprised you at all? Obviously you felt proud of the album – this comes through on the film – but it is still finding new fans today. Could you have foreseen this back in 1997 or 1998?
The longevity not only surprises me, it totally amazes me. But not even ten years have passed [since its release], so maybe it’s premature to speak of it as a classic. We were definitely pleased with the result but for a while it seemed like it didn’t click with our core audience. At the time we were suffering badly from delusions of grandeur, so it was probably for the best that we didn’t know.

But to you see Refused as an inspirational act? Do you hear aspects of the band in any act today? Can you listen to The Shape Of Punk To Come and hear any of the timelessness that so many fans hear? It really is a record that could have been made last week, or even twenty years ago…
People seem to feel that way (that Refused were an inspirational act) at least. It’s hard for me to say. We never got too snobbish, I think, in the way we wrote songs. We always had our audience in mind and it was a point of pride for us to engage them live. So, the songs were written elaborately manipulative. When in doubt, just put a build-up and mosh part in the end of the song. To our surprise this record really didn’t work live. It was a miscalculation on our part – people listen to it at home instead, which is strange but cool.

The punk of today, do you follow the bands that break through at all? What’s your opinion of today’s mainstream punk? How would you feel if some limp emo-pop band was sporting Refused t-shirts in their sloppily romantic video?
I’m in no place to judge kids who care about the music of Refused. I listened to all kinds of crap when I was growing up, you know. We all did. Refused had a little Biohazard period – trust me, I have pictures to prove it. So, I can’t really think of a more meaningless activity than to dictate who’s cool enough to listen to Refused, or who has gotten what Refused was about. I hardly know myself. That being said, it sure seems as if style has increased in importance lately. I’ve seen a lot of skinny, black-haired and angst-ridden kids, you know. I guess what I want to see is more fat misanthropists on stage, preferably without hair dye.

Looking back at the break-up tour, could something have been done before the wheels of separation were in motion? Or, were Refused destined to split, ultimately?
We had actually made the decision to break up the band while we were writing the songs for …Shape…, but we didn’t mention this to our label until later. So, these ‘wheels of separation’ that you mention were in fact an important motivational tool for the record. Knowing that it was our last shot, knowing that we had to get it right, added a certain desperation to the process. Suffice to say, this marked the tour from the beginning. It was like a negative filter through which we saw ourselves. We didn’t even understand that we were a good band at that point. It was like a collective depression.

From a personal point of view, what emotions did you feel when the final plug was pulled on that last show? Do you see it as a fitting end, or would some kind of hometown show have been a better parting gesture? Was the unpredictability factor of being in Refused, particularly while on the road – again, something that comes across on the DVD – what kept you motivated?
It makes an odd kind of sense that we broke up where we did and how we did, but of course I’m used to the idea now. When the plug was pulled, so to speak, there was only a sense of relief. We were too dazed to feel any sadness at that point. What kept us going for as long as we did was a sense of loyalty to the group that was bordering on the suicidal. The band had been more important than any individual needs for a long time.

If you were to offer an aspiring punk band any advice now, based on your experiences, what would it be?
One: when your drummer has recurrent mental breakdowns and runs off in the night, naked, after shows, then you might have a little problem. Two: when your singer writes a lyric featuring the chorus, “Fuck you for pissing on me / Fuck you for pissing on me”, directed at the other members of the group, that might be a good time for a little talk. Three: if two of the members of your group are romantically involved with the same person, who is also your tour manager, resulting in dramas on a daily basis, sit down and discuss the situation.

Of course, with any new release like this comes the question of reunion…
We would effectively annihilate our reputation as a good live band if we did. Mind you, we are old men these days. Jokes aside, it’s best left where it is.

Final question then: is this DVD the very final chapter in the Refused tale? Can you see the impact of The Shape Of Punk To Come diminishing any time soon?
I think this is it. As for …Shape…, I have no idea. People find new things to get excited about but the record has had a great run as it is. You never know, but I can’t see myself at 40 being asked about that record.

“…but they do, they do. Somehow baby, I never thought that we’d do too.”