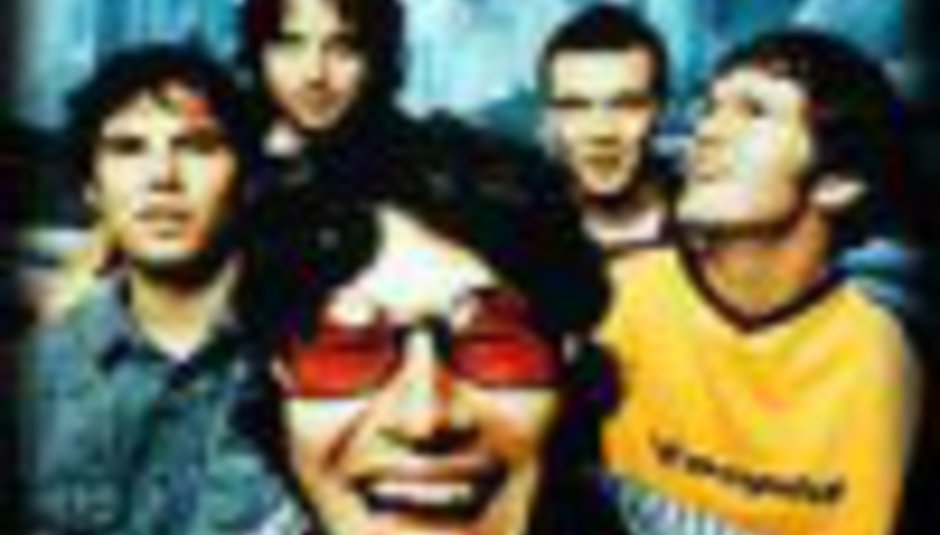 While I’m not too sure dressing yourself as a collective of six feet dog men is entirely befitting of a group of men easing into their thirties and probably old enough to know better, it certainly isn’t out of character for the Super Furry Animals.

Regular tales of love, death and heartache have oft been sidelined for stories of alien abduction and the love that daren’t spell its name - that of one between nobel prize winning scientists. Such frolics have probably greased up furry fans to expect the unexpected and await with baited anticipation. They need wait little longer, the follow-up to the Mercury nominated ‘Rings Around The World’ is in the can and ready to be racked. Work begun though on ‘Phantom Power’ over a year ago. As keyboardist Cian Ciaran recalls, “I suppose we started just over a year ago with demos and that, collecting ideas. I think it was May last year we went and started recording at Rockfield.”

Keen as ever not to repeat themselves, the band this time took sojourns away from the process, breaking off to play in the States and for a time they took the record-making home with them, in a very literal sense. “We cut out the middle-man. We didn’t have to explain our ideas to somebody else. It was more hands-on for us in that respect. It ended up sounding more like the idea we had in our own heads.”

As keen as many a band to avert red light fever, the boys have taken to home-recording with much enthusiasm, albeit in a somewhat haphazard fashion. “Every member has always been into technology anyway, not the physics of it, but more if you press that button, what does that do?!” Now on their sixth album proper, Cian seems still to be filled with enthusiasm and a fresh desire to explore territory with each record. It seems many more Super Furry Animals' records are still to follow. “It’s your heartbeat, the love of doing it and that you always keep learning. We’ve never recorded two albums the same way. There are always new things to learn and try out, new instruments and new ideas.” 'Fuzzy Logic' featured that most under-used of all rock & roll instruments, the Balalaika (in yer face, Radiohead!), so what textures have yet be tampered with in their knowing hands? “Instruments... let me think... we used a coke-can! We just recorded it and then chopped it up and put it through samplers. I don’t think it actually made it on the record, but you try these things.” Well, somebody has to.

That they are prone to mad experiments, some perhaps ill-fated, seem to suggest a certain restless spirit. Cian certainly is wary of being pigeonholed and is dismissive of the idea that the Furries are ‘art-rockers’, but concedes that sometimes maybe the kids know best. “It’s weird because sometimes different people say different things about different songs and you can see where they’re coming from and they’re not necessarily something you’ve picked up on consciously.” One thing they may pick up on is the bluesy slide-guitar sound of first single ‘Golden Retriever’, which bears more than a slight resemblance to BRMC’s ‘Spread Your Love’, ‘Jean Genie’, ‘Spirit In The Sky’ and well quite a lot of other booming riff-riven songs. Blues guitar is seemingly Gruff’s jones at the moment. “Gruff had written about eight or nine songs all in the same tuning. We had a big list of songs, we had Gruff’s album of songs in the same tuning, Bumf had written a handful of songs and we had a load of electronic songs. There were loads to choose from. Initially, we were going to do one electronic record, one in the same tuning, one traditional and try to do them all at the same time. Then we though we’d pick the best, put what worked together and make one cohesive album.”

Despite their penchant for furry animal costumes, Cian seems to be a settled individual, one happy with his ‘creature comforts’ and his Sky Sports. A slow ascendancy seems to have suited the Super Furries most well. “It hasn’t happened overnight for us. It’s been a gradual process and we’re still trying to define our own sound.” That they’re regular chaps though, that’s just between you and me though, I don’t want to spoil any illusions. “We’re not the most lively of bands when it comes to jumping on stage, ‘everybody clap your hands’ and all that. We’ve always been into the KLF spectacle of all things. I remember watching KLF on Top Of The Pops with angle grinders on their guitars and I thought that looks amazing.” Angle-grinders, hmm... they can probably chafe a bit, so dressing up like Dougal from the Magic Roundabout... just fuzzy logic.