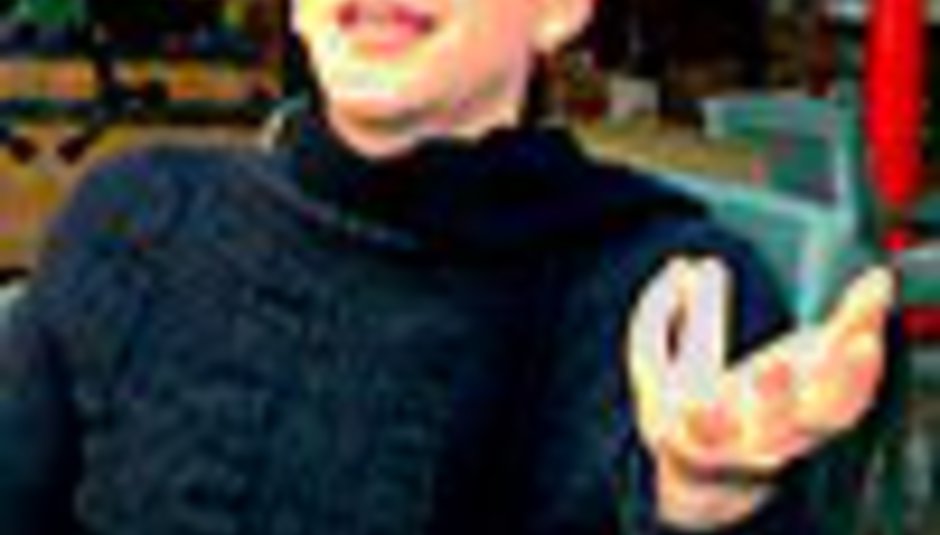 "I've saved a lot of money on psychiatric treatment"

"I've saved a lot of money on psychiatric treatment"

by Rebeckah Pearce March 25th, 2003
Brian Molko has been up since 5am doing interview after interview after interview. He has appeared on the Channel 4 breakfast programme, RI:SE and has had fifteen different journalists sit before him in a row, most likely repeating the same questions. In less than 24 hours he has two live performances; one on Top of the Pops and the other on the Jonathon Ross Show.

So, you can imagine my trepidation at being the last journo to interview Brian after such a long and boring day. I presumed he would be cranky and disinterested in my questions, and with good reason. However, Brian is disarmingly friendly and charming, chatting in an open and informal way to me. He always makes eye contact when talking and his grey/blue eyes are exceptionally captivating. The man looks unfairly good considering he has been up for a long time. So, what must it be like sitting through constant interviews and being expected to be pleasant all day?

“Towards the end of the day you have the tendency to be less patient, like: 'that one… again'. You want people to be more original but I have to remind myself that this person has, hopefully, worked hard on their questions. However, sometimes you can feel that you are being insulted in an underhand way. I am guilty of putting the phone down by ‘accident’ occasionally.”

Placebo have bounced back into the limelight with their fourth album, ‘Sleeping With Ghosts’ which was produced by Jim Abbiss, who has worked with both DJ Shadow and UNKLE respectively. With this in mind you can expect an album full of different flavours and experimentation, from the beautiful Pink Floyd-esque ballad, ‘Special Needs’ to electroclash inspired ‘English Summer Rain’.

“Working with Jim Abbiss was great – he is a guy with very strong ideas and we asked him to give us a real kick up the ass. He made us listen to music in a different way and we had to give up a lot of control. There is no formula in what we do, we like to feel around in the dark and see what we like, letting the songs present themselves. I would describe this album as an emotional jigsaw puzzle.” Which is an excellent way to describe ‘Sleeping With Ghosts’ with its deep and personal lyrics. The title track includes the epitaph-like line “soulmates never die”, which tells the story of true soulmates meeting in different lifetimes. ‘Second Sight’ is on the other end of the emotional scale, portraying the morning after a one night stand when one person wants more: “walk away to save your face / you never were a genius”. One can only imagine that there must be a plus side to airing your dirty laundry in public.

“I’ve saved a lot of money on psychiatric treatment and I’m very thankful for that,” laughs Brian. “I use song writing in a cathartic way and maybe that’s why people either really love our music, shy away from it or really hate it. Some people don’t like that sort of confessional quality and prefer something more euphoric or anthemic. I think this album is quite universal but it’s so personal that it has to be.”

Surely it must be invasive having strangers (i.e. journalists) constantly grill you about your lyrics as a key to your personal life?

“I would be lying if I said that it wasn’t grating sometimes, yet at the same time I’m pragmatic. I realise it’s a process you have to go through. However, it is an amazing luxury to, as an artist, express yourself through your chosen art form.

I write both from my own point of view and from others. Sometimes I create a character and place myself within it. I find that it’s a release for me and I think I have gotten better at telling stories and I think some of our videos reflect that.”

But what has driven Brian Molko to write such creative lyrics? Are there any significant moments in his life or people that have inspired him?

“So much has influenced me over the years. From the second album ['Without You I’m Nothing'] onwards there was quite a lot of religious imagery because I was raised within the Church. I am happy being totally lapsed now as it has given me such a wealth of stories.

Certain people have had a large impact on me emotionally. I think it’s usually more than one person I’m writing about though. Like the song

‘Without You I’m Nothing’, it’s not necessarily about one person. I usually bring together the mistakes I’ve made with a couple of different people and use that as a catalyst for song writing.”

Recently, Placebo completed a few warm-up shows in smaller venues than they usually play, airing the new material before the big European tour in April. Each gig was warmly received and Brian, Stefan and Steve looked the happiest and relaxed they had in a long time. Is this heralding a new dawn for Placebo – being as content as Billy Corgan but without the band change?

“We’re just amazingly happy that people still care, that our music is still important to them. I guess it’s one of the worries in the back of my head, you know, the high turnover of bands. And with people like SUM 41 or Avril Lavigne representing the youth of today as corporate manufactured acts, I wondered if people were still into the real thing.

That hour and a half you spend onstage is what I like best about being on tour. I think we have relaxed into the idea of what it means to be us. We have a new found strength and we have a long fight ahead of us.”

It is quite hard to believe that the articulate and sensible man sitting opposite me had a name for being a difficult interviewee and once left “a trail of blood and spunk across the country” in 1998 (“A quote that will follow me to my grave”). Placebo really did have quite a reputation for drugs, sex and general misbehaviour, Brian often described as a ‘drug-crazed sex dwarf’. Was this an unfair portrayal or an accurate summary of that time?

“In an earlier interview someone put it quite well. They said: ‘You had an enthusiasm for drugs and sex’ and I believe that is what people should accuse us of. In that situation you could only say we had a reputation for ‘enthusiasm’ because at that age it’s what everybody goes through. You take a 22 year old who has been living on the dole for a few years. Give him a record deal, some money, get him on a bus full of alcohol, give him lots of attention and watch it blow up!

I think it’s a natural thing for people to do in their 20s anyway, it just so happened we were doing it in public. We had a lot of bravado, swagger and arrogance and we probably spoke about it a bit too much but it’s all part of the myth making process.”

Placebo certainly seem a lot more chilled out now, they don’t seem to be in a rush to try everything, experience everything. Maybe, because there’s not much left for them to experience now except settling down and continuing to enjoy their music. “It’s less of a lifestyle choice and more of a physical imperative, it’s just not possible to do that anymore. Put it this way: if you eat too many curries one week you don’t want to eat curry for a month – too much of a good thing, I suppose. You realise that you’re not immortal and that you have responsibilities. It’s about partying when you deserve to – rewarding yourself.”

It would appear that a more mature Placebo has emerged from the gritty leftovers of the 90s. ‘Sleeping With Ghosts’ serves to represent that, justifying everything Brian has said. Brian, himself, has proved to be an honest and thoughtful person, thinking each question I ask over thoroughly to give me the best answer he can, often exploring himself through the question.

So, Brian and the rest of the band, the hard work done, must be ready to sit back and watch the album do its thing.

“It’s the limbo period between finishing the album and it coming out that means you cannot rest yet. Once you get your first chart positions out of the way you can relax.”

With this in mind, Brian can now go and relax with a well earned drink, safe in the knowledge that Placebo have achieved No. 12 in the UK Top 40 and, bizarrely, No.1 in the Portuguese charts, with their first single from the new album, ‘The Bitter End’.