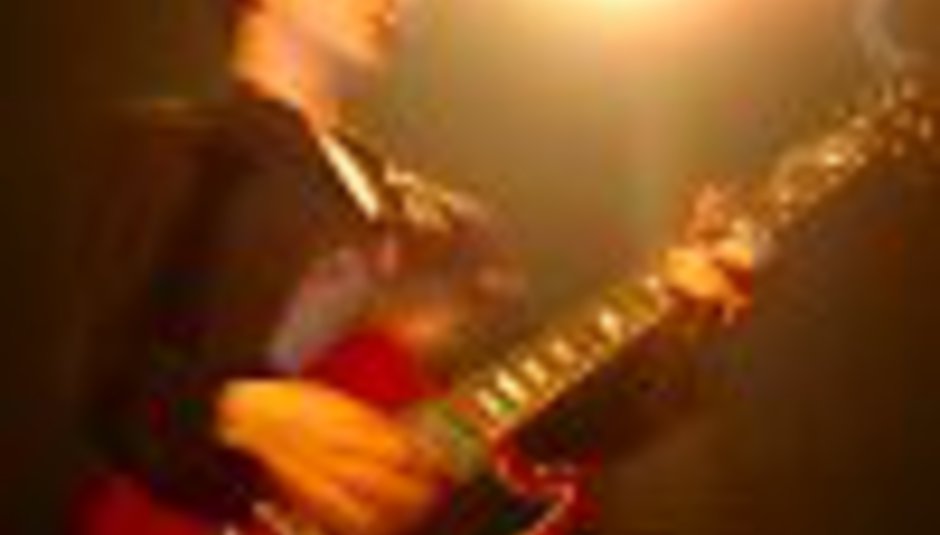 There was an air of quiet anticipation in the crowd at the Concorde II where Placebo were about to play a warm up gig for their extensive UK tour. It was also to be one of the first airings of new songs from the previously sexed-up European trio. Everyone seemed to be holding their breath – what would Placebo sound like tonight? Had they changed? Would they be as sexy as before?

After an introduction from “Placebo’s dad”, a man who beared a passing resemblance to Brian Blessed, the band came on stage amongst hysteria. Screams faded as Placebo leapt into an instrumental number to open the show, closely followed by ‘Allergic To Thoughts Of Mother Earth’.

The intimacy of this venue was a real treat for any Placebo fan. Brian Molko chatted away to the crowd in between songs in such a carefree relaxed manner, the subject matter ranging from internet album downloading (“There’s a whole generation of kids who don’t know albums have covers”) to Fred Durst and Britney Spears, even dedicating new song ‘I’ll Be Yours’ to the failed "couple". to the energised sexiness of ‘Every You Every Me’. The new material from forthcoming album ‘Sleeping With Ghosts’ was a return to true Placebo form. The sweet choruses of ‘I’ll Be Yours’ followed by the abrasively punchy new single ‘Bitter End’ were reminiscent of the Placebo’s brilliant debut album albeit with a more mature edge.

Molko couldn’t stop smiling at the crowd’s reaction to their new tracks whilst bouncing around the stage with a vitality not seen for a while. Putting his guitar aside he sang along with just bass and drums to ‘Teenage Angst’ making sure that everyone in the front few rows had a chance to touch his outstretched hands.

Finally, to finish the show Molko announced that the band would be playing popular BBC Choice programme, ‘Re:Covered’, and that they were “going straight to the top and covering the Pixies”. Launching into the bittersweet melody of ‘Where Is My Mind’, a song that is so perfect it could easily be ruined by a lesser band covering it, but Placebo did it justice. Frank Black would be proud.

After playing for over an hour and a half, of which every minute was excellent, Placebo left the stage and I can say I have never seen the band look so happy and relaxed. So, with a whole new bag of tricks up their sleeve, Placebo are definitely back to shake up the music scene and show everyone how it’s done.

The sparkly one is back. He’s loud and obnoxious as usual. The cheeky grin is buried beneath his ever-widening bald patch that is directly under stage light 2. If you forgot how our short little androgynous pop pixie likes to preen and wiggle, he’s back, Placebo have ’another’ new record out and boyo are they going to promote the bastard.

Despite the bizarre instance of Ian Brown looking for a fight to my right, it’s a pretty standard night. Read: Dull. Placebo Dull. Like a rock being thrown at sadist's head, he’s seen and done it before. The songs are slow, the in between banter is as formulaic as a truck load of ‘Nancy Boy’ b-sides and there ain’t all that to get excited about. The singles are wheeled out. Stop. Start. Stop. I can’t remember a single song they claimed was on their new record either, so take that as me being senile and/or drunk or your favourite post-Bowie/S.Youth rock starz driving straight down the middle of the road, with a touch more make up than David Gray.

As the song goes, ’A friend in need etc…’, this could be a good time to help. I heard Stock, Aitken & Waterman are doing reduced group bookings.

Ok, I admit it, I was here for the support band. I came to see Colour of Fire, and they were fantastic - this lot are improving with every performance, and dividing opinion as they go - potential stars swiping the best bits of Muse, the Icarus Line, Idlewild and, dare I say it, the Lostprophets, or merely this year's King Adora? They could go either way, but right now they're on the right track.

Placebo on the other hand don't really have anything to lose. They've got the kind of fanbase a lot of bands would kill for, and every word Brian Molko utters is met with rapt adoration and wild cheers from the crowd. Just like in Brighton the night before, the Britney/Fred jokes are in there, as is the surprisingly well executed Pixies cover. Whatever you may think of them, they're consummate professionals.

They are also, when they choose to be, very good at what they do. Whether or not their much-imitated brand of sleazy glitter rock is to your taste, there's no denying they know exactly what they're doing. They're far better tonight than they have been on prior occasions; the songs that have made them famous are rolled out with ease, "Every You Every Me" going down particularly well. The new material meanwhile sounds strident and hopeful; if it's anything to go by, their forthcoming album may well make up for the travesty that was "Black Market Music".

They hit a disappointing lull somewhere in the middle of the gig though. Why do Placebo always do this? It's going so well, and then they start slowing down. They're never better than when their riffs are at their fastest and most incisive; so it's irritating that they choose to make blustering "epics" out of their slower songs, with Molko's ubiquitous vocals swerving melodramatically in all directions. A case in point is the potential tear-jerker "Without You I'm Nothing" - on record it's a restrained, brilliantly miserable and gorgeous song, but live it becomes overblown and loses its charm. But ultimately it doesn't matter too much to Placebo - they're playing to a converted crowd, so who's gonna complain?