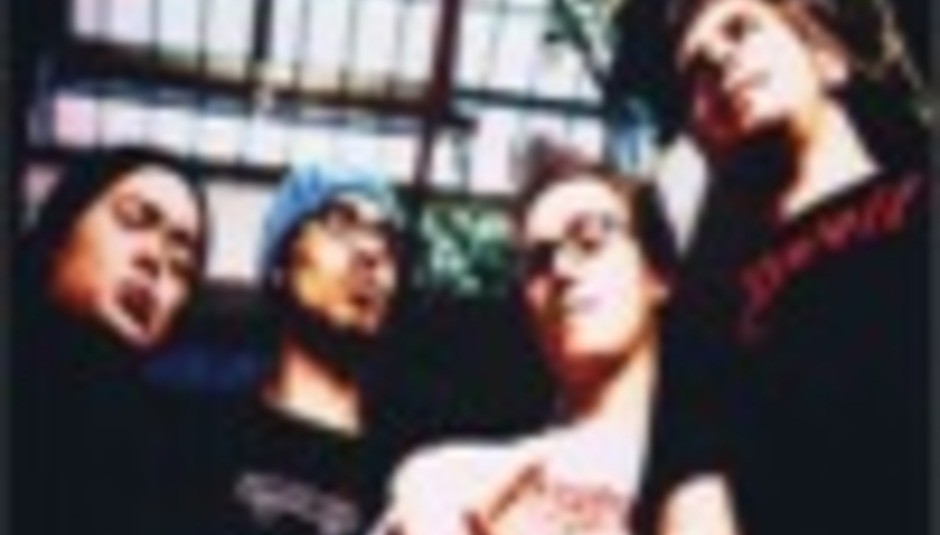 “We’ve been illegal for about 2 years”

“We’ve been illegal for about 2 years”

by Raziq Rauf January 17th, 2003
ThisGIRL are almost officially Rotherham’s finest crazy ‘emo’ rock outfit if you are to believe a lot of people. Their adventurous frontman epitomises the essence of all an eccentric leader should be, with his explosive antics circumnavigating the entirety of stage. It is this that often captures the audience’s attention first. It makes them listen. Listen to the jaggedly abstracted rhythms and perfectly posed melodies, all minced together in a vision of turbulence. It has brought them many fans over the past year. After a year of frenetic touring with all sorts of bands, DiS just about manages to catch up with all four of thisGIRL …

It’s been 3 years since you formed the band…
“Yeah, it’s been quite gradual, but in March 2001 we signed to Lockjaw. They put us out on tour straight away. The first two or three tours people didn’t even know who we were! We've just been touring our arses of for a year.”

You’ve had a busy year, as you said, with a particularly eventful last few months…
“We changed agents a few months ago, so we toured extensively for the past 6 months. There are so many bands where you chuck em out and there’s no one there to hear them but now we’re playing to people who might have heard us 4 or 5 times now. I think we work hard.”

And indeed thisGIRL do work hard and hopefully it will become slightly less dangerous for them, “We risk getting killed doing this stuff. We’re doing it illegally, in the back of a truck. The last tour van was illegal for about … ever since we got it. We’ve been illegal for about 2 years!” Don’t tell.

How has recording gone for you?
“Well, there’s just been the mini-album so far. We did loads of demos before and when we signed we were going to do a single but we never did. ‘Three Minute Spanish Film’ never came out. It was recorded and Lockjaw pressed 300 and they went within a week so we never actually released it.”

What have you got in store for the next year?
“Just touring a lot, really. We’ve got an EP coming out and we’re gonna start recording that early in the new year.”

What are your views on music sharing on the internet?
“I think it’s wicked. Bands like Metallica can slam it and say that they’re losing money because of it, but they are making so much money anyway. How many people do you know that are downloading full albums and then take time to find the cover and then print the cover off and make it an exact replica? If they like the album they’ll fucking buy it. Bands like us get around through music sharing.”

Is there a Rotherham ‘Scene’ of note?
“There was a good scene but it’s died out. Sadly, we’re all that’s left, really.”

You played first on the last day at Reading, which I really did struggle to get up for…
“That was the first time we’d ever been to Reading, and we played it! Leeds was better: the sound was better and the actually tent was bigger, and Reading was pretty full for a Sunday morning.”

Too right it was. Some days you have enough space in that tent to perform cartwheels and hold a séance, but 12pm on a Sunday ‘morning’ when people are nursing their 3rd or 4th consecutive hangover, I had to rummage and squeeze my way past a near capacity crowd. This is testament to thisGIRL’s increasing popularity and another reason to go see some dates on their January tour: