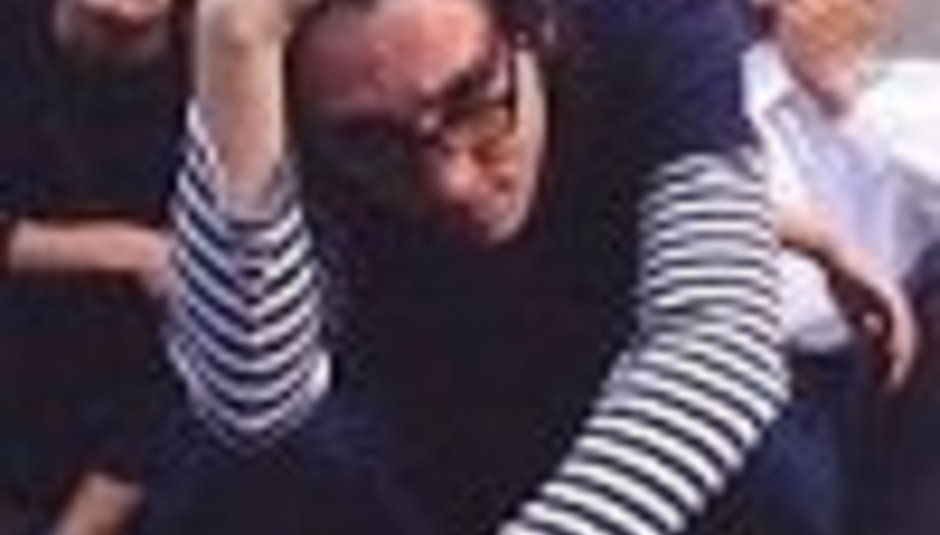 “Kangaroos on the table messing up the sandwiches!”

“Kangaroos on the table messing up the sandwiches!”

by Raziq Rauf September 4th, 2002
It is September now. We should be in some sort of post-Reading lull. A period of convalescence from undue excesses perhaps. But no, this is apparently not an option. You get Reading warm-ups to prime your weary work-trodden minds for the extravagance that awaits you over the weekend and then once you return, post-Reading warm-down gigs are quite acceptable. Then you get the scrappers trying to mingle in with the big boys: those that are preparing themselves for an autumn tour; those who are willing to work the meat off their arses in order to gain maximum exposure in the circles; those who really care about what they are doing here; those who still love what they do. =Reuben= are here playing a one-off show in Camden with the mighty thisGIRL and Kinesis. Always an opportunist, I grab 20 minutes with the band…

Jamie on McDonald’s:
It is wicked. You can get food there - it is massive value. They used to do a meal there for £3.50 which was…check this…two burgers, massive sized fries, massive size drink. Suit me down to the ground and now they’ve taken it off the menu and I can’t get it any more. Also it’s a big frame shop and my mum used to bore me for hours by going in there, looking at frames - rubbish! Also it is a music shop where me and this man here - Jon - used to work for a man called Mr. John McDonald who was a good dude until he fired our asses for going on tour. So that’s what it means but that’s just the start of it, man! McDonalds rocks!

This is the week after their second chart-legible single has entered those charts. ‘Stux’ faltered slightly and disappointingly hit the lowly heights of #86 despite receiving the hugely beneficial support of a video appearing on MTV2. As Guy explains, it was not because the record was rubbish, “It got to #86 but the barcode doesn’t work because a logo was too close to it. So it wasn’t scanned in at all. Some places were kind enough to type in the number but a lot of places just typed the price in so it didn’t get counted toward the chart.” An interesting point is then made by Jamie, “It could’ve been #1!” Yes, and now we will never know.

Jamie on School Uniform:
Got abolished in my school but I was on the committee that abolished it and I was fighting to keep it because I thought it was smart and I wore it every day even after they’d abolished it…I didn’t have many friends.
Jon: I wasn’t even his friend.

Having released three singles now, Reuben are still without a record deal. Partly due to this they are keen to distance themselves from the Boss Music label which has released their past two singles. “It is only a two single deal with Boss Music and because it’s Andy Ross’s label (ex-Parlophone) people often think that we are signed to Boss Music. We aren’t”, explains Guy. Later it is uncovered that they are hoping to release their next single on a label well known for being a stepping stone for bands on the way to reaching success, “Yeah, the next single’s out later in the year and I would much rather be a ning because then you can say ‘NING’!” Fair enough. I also found out that the band were slightly opposed to speaking about releasing an album.

Jamie on Jumpers:
Often the nickname for kangaroos in the Australian outback. (adopts Ozzie accent) “Ah mate, here come a couple of jumpers”, and I’ll be like, “What’s the deal man? Jumpers is wicked!”, and they go (adopts Ozzie accent again) “Nah mate, kangas”, and I go, “Oh no! We can’t sit here and have a picnic! Kangaroos on the top of the table messing up the sandwiches! I don’t know what is which! Y’know I thought I was having cheese and chutney but I’m stuck with peanut butter.” Chaos.

Jamie on The Internet:
Here’s the deal, right? Music sharing over the internet is what kills the music industry. When the music industry dies, bands die. If you keep on getting your music for free, off the internet, and burning it onto little cool CDs that you write thisGIRL’s album, thisGIRL don’t get paid, Lockjaw has to close down and thisGIRL cant release any more records. No matter how many people find out or know about a band, the band can not live unless they have a record deal from the industry. And the industry can not sign any new bands unless they have some money and over the past few years people have been getting all this free music and not buying shit and that’s why their favourite bands get dropped and that’s why it is difficult for new music to break out. It really is killing music. Its cool if people hear a couple of tracks and then go out and buy it but when they download whole albums, that’s why its so difficult to get heard. On the other hand it does help bands get heard but that means nothing when you cant release a second album cos nobody’s actually bought it. As you can see here, a certain part of Reuben was seen scattered across the Reading Festival but when asked what he thought of his weekend, Jamie said, “SHIT! It really was shit. It was rubbish. Apart from thisBOY here [points at thisGIRL bassist, Matt]. All my favourite bands were rubbish. Every band I actually wanted to see was shit. I was there to see…no one actually…thisGIRL were the best band.” It is difficult to disagree.

Jamie on Lunchboxes:
I bought myself one from Liverpool. It was wicked. It was a Beatles one in the style of the Rubber Soul album and I opened it in the shop with the lunch I was carrying I bought it. The woman in the shop was like (adopts Scouse accent) “Eeeeeeeeh, you put your lunch in there!” She told everyone in the shop to look at this nutter putting his lunch in the lunchbox.

What is your favourite cheese?
Guy: Cheddar…no Mahon actually.
Jon: Cheesestrings
Jamie: I can’t remember what its called…what’s that cheese where they go “I need more of it”…
DiS: Dairylea?
Jamie: No man…soft cheese…chicks like it…they put it on bagels…
DiS: Philadelphia?
Jamie: That’s the one! That’s pretty cool. Sorry man, I just couldn’t remember what it was called. Chicks really like it. Half fat? Have twice as much! No ladies! You got pounds to shed off not keep the same jubbly weight.
Jon: You are PC.

Reuben are all set to embark upon a mighty September tour supporting the equally mighty, and equally rocking McLusky in the following venues...