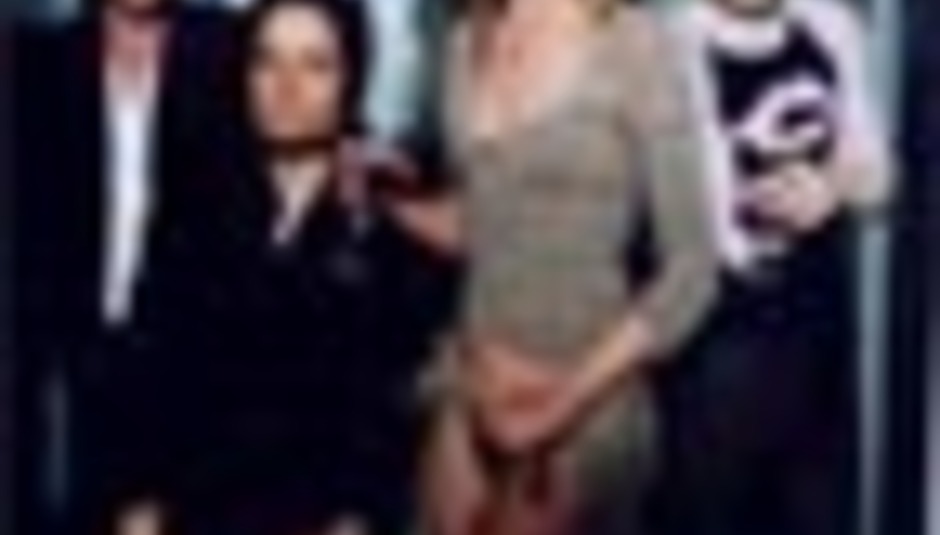 by Liane Cameron August 9th, 2002
Queen Adreena have picked a good day to visit Glasgow. After last week's biblical floods, the sun is innocently playing around the early evening today, and Katie Jane Garside wants to go outside for the interview. But concerned venue staff dissuade her: "You'll just get hassled no end." This seems likely, as she looks striking, elfishly fragile in a yellow sundress and wearing bright flowers through her hair. We settle for one of the settees instead, and I start by asking her how the tour is going so far. She replies with big-eyed laughter and shakes her head. Oh. So this is the first gig tonight...I ask how they are all feeling about that.

You know, we're usually really worked up before a gig, but today we're all just so somnabulist about it, me and Crispin are like: Whatever happens, let it happen...

Sounds good. So how does the new material feel, compared to the last album, which seemed kinda more ethereal?

Yes, this time round I want it to be more direct. I want to have a fucking past, I want to have been here, you know? Get back onto the planet and into my head...-

(It's at this point that I realize the tape isn't recording. I have no idea what's up with it. While I rummage around for a pen, so I don't need to interrupt her, she picks up the dictaphone, moves some things and it starts recording. I am just so happy...)

You fixed the tape!!!...ok, what you were just saying, about getting back onto the planet, this record being more earthy, in your face?

I'd say it's more primal, yeah, more in the body. More animal. I'll say it again: I want to have a past, I want to have been here. Like you said, being present while it's happening, that's what I'm trying to do. I've always had a fight with the idea of time, it's seemed very irrelevant to me and I was always very anti the idea of evolution, that kind of thing. But I'm going to end up being just a cloud that blew through life, so I want to leave footprints in the sand.

That sense of disconnectedness shines through on a line in "Hotel Aftershow": "I've got a suitcase and no address, nothing, no one, gravity's changed its fucking mind again". So do you think touring adds to that?

You know, in a way touring is the most grounding thing you can do. It's probably a double-edged sword, but we all love playing, it's where it's at and we thrive on it. When I'm going to rehearsals and I'm feeling ill, to actually play hard, it just burns all the shit right out of you.

I guess it is (Smiles), but I've always hated that word. It's not about catharsis, you know, this is not what I'm doing this for. But it's certainly like taking acid, it cleans the slate, brings the clock back to zero.

That's interesting, because your music seems so emotionally charged, and some artists worry about feeling burnt out after a show, but you'd say you feel stronger afterwards instead?

Yeah, like you've been made new, even reborn. If you're very lucky. It doesn't happen all the time.

Right, if you get a really good gig. So where was the weirdest place you've done a show?

(Bursts into big-eyed laughter)Where is the weirdest place we've done a shag or a show?!

(Grins)I'd probably be happier answering that question to be honest!...I don't know... It's funny, I was in a bar in Shoreditch the other day, and it really reminded me of the early nineties. It was like a squat bar. It's not though, Bill Drumond owns it, and when I heard that it suddenly seemed really contrived. But it's still a great place! We used to play a lot of squat parties, and those were always great fun.

Yeah. But you know, it's always about looking at the detail. There's always so much in the brick work, and every place is amazing really. Just like there isn't anyone you meet that isn't absolutely peculiar. Everyone you meet is absolutely extraordinary. I've never met a human being that isn't, that doesn't have a fantastic story and is completely valid in their...you know,

You can see quite a lot of magic everywhere?

Maybe I'd call it magic, yeah. You know, everyone's got fantastic fingerprints and lines on their hands. Everyone's stories and journeys are amazing and humbling.

With your music being so intense, do you find it easier to be honest, without fear of say sycophancy, because for all the beauty you also have all the darkness?

Interesting way of putting it, I haven't really analyzed it like that. I know what turns me on, and it's that fine line, that point where you're falling off the edge of a cliff, where your stomach turns, I'm always trying to find that point in music. You rarely hit it, and again, that's the joy of playing live, because there you can be just at that point where you've lost balance. I'm always walking between polarities, trying to find the opposing sides.

Because that's where the tension is highest?

Yes. And then you step through them into a different dimension.

That's beautiful...I was also going to ask you what an "adreena" actually is?

And she was called Queen Adreena?

Yeah, she took on that name, which was a point of validation for us. But the name came from when I was writing in Wales, I lived there for a few months on top of a mountain. It was a very strange place, weird dreaming, really heavily, and there's was Poltergeist stuff happening, I was vomiting involuntarily all the time.

You picked up a lot of psychic energy.

Yes, there was a lot of really potent stuff. And so she just arrived in my head, she came in as Princess Adreena, and I had to write her story. She'd been a warrior princess who'd cut off her left breast for better use of bow and arrow, stuff like that. That's where she came from and then we crowned her, made her into Queen Adreena.

That's so cool. The last thing I'm going to ask: On "Drink Me", there's a song called "Siamese Almeida", is that about an alter ego?

You got it, honey. It's total war. Too many voices (Screams), all fighting each other and trying to override each other. And you have to scream until they're fucking silent. Out-scream them! (Laughs) Run! Keep on running. You have to run! Outrun them!!