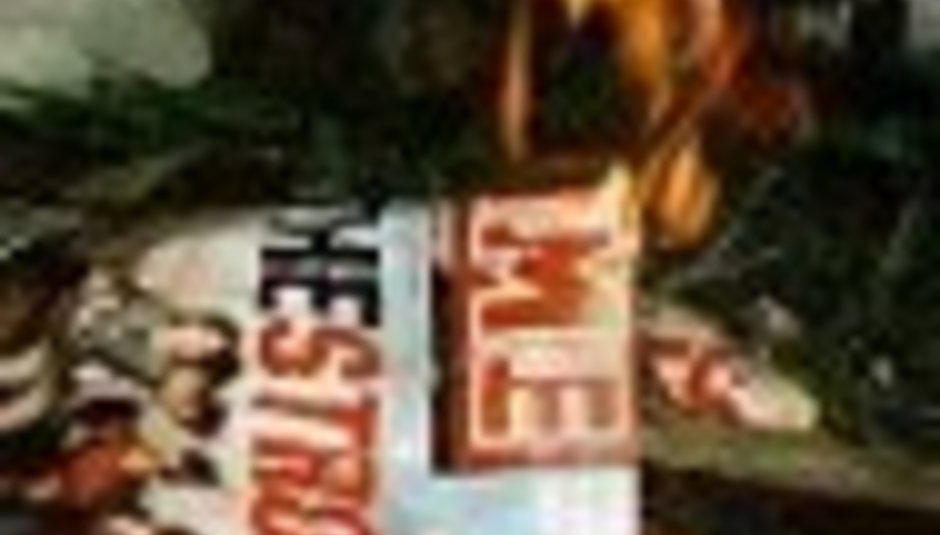 by Gen Williams July 30th, 2002
The Vines are this year's best band. There is no band in existence - EVER - that will make you shit yourself with such unrivalled joy. This statement will apply until January 30th 2003 - after which point, you are advised to stand by for further announcements.

Ok, that's just the way it is. Bands get hyped for several months and applauded either for their startling innovation or their stylish and imaginitive updating/reinvention of an existing musical style. Once they are deemed to have outstayed their initial welcome, they are effectively offered the choice of coming up with some new - and unprecedentedly startling - material quicksmart, or kindly fucking off and granting us the dignity of forgetting that we ever [oh the shame] claimed to like them. "Who likes THEM anymore?!" That's the way it is. No point moaning about it, it just amounts to fighting rather pathetically against the rushing tide.

So? Does that mean we should just ignore it? Doesn't anyone else find it just a bit sickening? Aren't you fucking fed up of being told what you may listen to this month? Observe the use of the rhetorical questions; I know very well that a lot of people do and are. But right after the "it's shit isn't it" remark comes the "but that's the way things are" remark. Why should it be? "If it ain't broke, don't fix it". But it clearly IS broke, because bands are getting fucked over, music fans are getting sick of being expected to believe the hype year in year out, and it's steadily getting more boring than an evening in the company of Chris Moyles. [Let me clarify at this stage that while this article is written with a cheery nod to the NME, I am well aware that they are merely the most visible manifestation of this whole attitude, and my wrath is not aimed solely at them. So there.]

What the perpetrators of such methods are happy to ignore is that the people who've produced whatever album is making music hacks weep with unashamed nostalgia or seesaw dementedly at the sheer uncharted genius contained within it this month, have probably been making music for a far longer time than they've been in the public eye. Songs that infect the music-hungry public for a month may well be at least two or three years old. A debut album is very different to any other album in that its contents could indeed be perhaps half as old as the person responsible for it, because an artist working on their debut album may have a formidable arsenal of unused music to plunder.

But post debut, new material is demanded. Unless you're an artist of considerable stature, it's not enough to delve into decade-old personal archives - the baying public is crying for development, innovation, progession, the scent of the new. The way the current system of hype and dismissal works, if you don't meet expectations and keep churning out the hits, year on year, with little or no hesitation, you're last year's news. And if you're a slow-burner who, given time, can produce works of blinding beauty and chaotic perfection, but you require a good few years to assemble each 12-song collection? Fuck off. That's the message. Unless you've managed to single-handedly capture a zeitgeist that will remain in the collective psyche for several years to come, your career is over - even if, in fact, you were that successful during your initial heyday, your re-emergence may still be met with stinging cynicism and bored glances in the other direction - that'd be Elastica then. Fast workers wanted; turn up, stamp your card, give us a song, go home, and do it again tomorrow. It's a factory industry. Is it just me or does that seem a little saddening, when artists and writers and PR bods and label execs rave sycophantically about "art" and "creativity"? Doesn't creativity take time to harness?

Yes, some bands have a natural ability to fire out the hits like semi-automatic bullets, but others require more time. Surely there's room for both? Can we not enjoy what's around now and wait around for those who've taken a little longer? Surely we can make time to give someone other than music's current darlings a chance. Furthermore, many bands' best songs aren't their singles; little moments of perfection can hit you between the eyes from b-sides, album tracks, random songs that you found online and never knew existed [anyone heard "I'll Still Write" by the Cooper Temple Clause? To me it's one of their best songs, and it's tucked away as a b-side, and surfaces occasionally at gigs.]

Inspiration can't be squeezed out of a machine on a need-to-sell basis; some artists can take ideas from their daily lives, others find it in less predictable places. If we subscribe to the idea that bands should all follow a set career path, aren't we depriving ourselves of some potentially life-changing artists simply because they work differently? It's accepted that songs no longer have to follow the verse-chorus-verse-bridge-chorus structure, with bands like System of a Down, Trail of Dead and The Rock of Travolta altering our perspective with every passing day; isn't it time we updated our attitudes to bands' methods? Music's an industry, but it is also an art form, and it's time that we made room for both of those considerations. It only takes an hour to listen to an album, and a few repeated listens to begin the familiar process of getting to know the album - that being the case it seems sad that only the massive bands who enjoy extended fame and global status are allowed to keep us waiting for their magnum opus - why should other, smaller bands who could in time equal the Radioheads and Tools of this world in the public's esteem, be dismissed so readily?