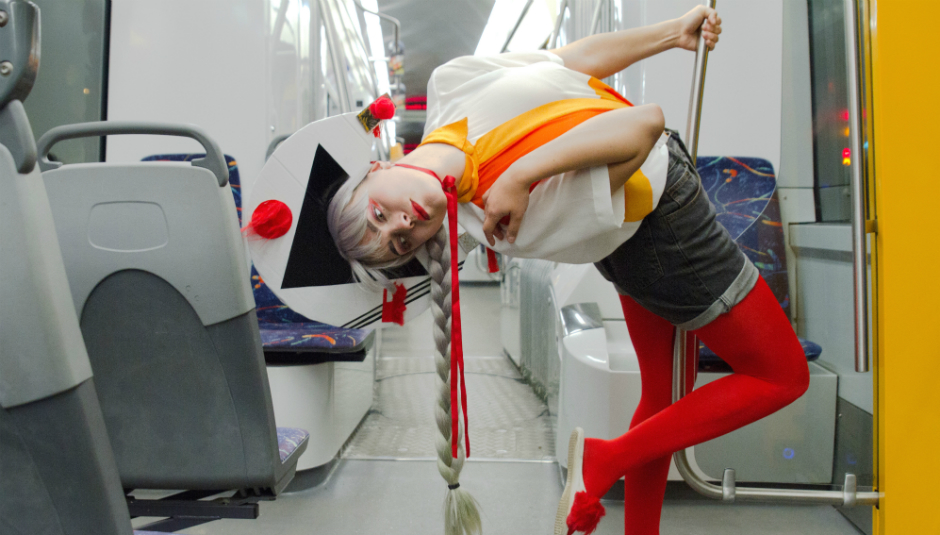 Latvian musician Elizabete Balčus has been compared to St Vincent, Bjork, and Efterklang among a number of reverential artists, something she finds flattering yet also takes in her stride.

Based in the capital of Riga, her debut album Conarium came out last year to a wealth of critical acclaim, picking up the Latvian Music Recording Award (Zelta Mikronfons) for best alternative/indie pop album of 2016 while also being nominated for her home land's equivalent of the Mercury Prize (Austras Balva). Since then, she's played a number of festivals all over Europe including Eurosonic, The Great Escape, and Tallinn Music Week, picking up new fans wherever she goes.

This month sees the release of new single 'IKA', her first recording since the album. Released via Wall Of Sound, 'IKA' is inspired by Greek mythology and the story of Icarus, as Balčus portrays a luminous perspective amongst an experiential electronic backdrop of ideas. The accompanying video is a collaboration between Balčus and filmmaker Zane Zelmene; she was exhibiting interactive artwork that reproduced lucid dreaming experiences, filmed from different perspectives using virtual reality and augmented reality technologies. In the video, CGI special effects are mixed with videos shot in and around London, using the digitized body of Balčus to generate images that are transferred onto the filmed video mixing together real and virtual words, the cinematography is inspired by surrealism, including the works of William Blake and Greek mythology.

DiS: When did you start making music as a solo artist?

Elizabete Balčus: I've been doing my solo project as it is now for about three years. It evolves. I started out as an acoustic singer/songwriter about seven years ago. I was just playing piano and singing, then I wanted to do some electronics so I bought a Technics synthesizer so I could do that. It probably sounds cliched, but I was just walking around one day and I could hear some melodies in my ear. Also, I have very vivid dreams so a lot of the time I'm just trying to recreate those in real life so I can make music from my dreams. I get most of my inspiration when I'm sleeping!

You've already played a number of shows in the UK. How was that?

I've enjoyed every show in the UK so far. London has been particularly great. One thing I try to achieve with my live show is to make people feel something. A lot of what I do is performance art, so I want people to dive into that cosmic feeling as if they're being healed. If people are happy after my shows then I guess I must be doing something right!

Do you notice much difference between countries in the way audiences respond to your music? For example, how different are they back home in Latvia compared to the rest of Europe?

The biggest difference for me is people outside of Latvia don't know me so they have no expectations. It's more surprising I guess because they seem more content to listen outside of Latvia.

Nothing really because I'm doing what I enjoy. I don't care what everyone else is saying. I want to record songs with an orchestra in the future so I will need a lot of money to do that!

The most difficult experience I've had so far was my very first performance at the Reeperbahn Festival. The sound was really bad and there were only seven people in the audience. I thought the show went really well considering but I just saw people leaving. I think they felt it was too experimental and I didn't know what I was doing. That was the first time I'd experienced people not liking my music.

Your music is very experimental and does push boundaries. Do you deliberately set out to challenge audiences when you play live?

You're based in Latvia which isn't renowned for having a large music scene. Has that been disadvantageous in any way?

I'm not tied to one place. Last year I played a lot of shows outside of Latvia and I can imagine one day being based somewhere like London or maybe somewhere in Italy. Riga isn't really that special to me. I was just born there so whenever I go anywhere else I'm never homesick. I like to travel and change places.

What's been the highlight of your career so far?

Playing in Italy, especially the south. People are a lot more open to my music there. I seem to have a lot of listeners in Italy.

You've amassed a lot of critical acclaim recently from various publications. Do you pay much attention to reviews?

I try not to but then at the same time, the reception so far has been lovely. I don't think I've seen a bad review yet.

Some people are comparing you to St Vincent. How do you feel about that?

They're also comparing me with Bjork, Efterklang, and Braids! So many bands. If that helps people get to know me and listen to my music then why not? I like St Vincent and Bjork, so of course it's flattering.

Are you looking to break in the UK primarily?

I want to break in as many places as possible not just the UK. I'm just performing and making music so I'll see what happens. I try not to think about that kind of thing too much.

Your last album Conarium came out in 2017 and features heavily in your live set, but I also notice you have a couple of new songs in there as well.

That's right. I'm currently playing one brand new song which I'm about to put out as a single. I've also started recording some new songs in London which I'll continue in Riga after the tour has finished.

You're very proactive when it comes to playing as many shows as possible all over Europe and engaging with new audiences. Is that something you'd advise other acts to do too?

Definitely, because there is a chance someone else might like it too. I'm trying to be open in doing everything I possibly can to get more attention to my work. I want as many people as possible to hear my music and watch me perform. It might not always pay off but there's more chance of someone seeing you if you're prepared to get out there and play.

What is your ultimate ambition as an artist? Where do you see yourself in five years time?

I don't know! I don't really make plans so couldn't honestly think that far ahead right now. I don't know what I'll be doing come the end of this year never mind another four afterwards!

I'm playing some shows in Italy, a festival and a gallery opening. Then I have some more festivals in Finland, Sweden, and Spain. I'm releasing my new video in August, then hopefully finish recording some new songs in the autumn. I'd like to have a new album ready for release by the spring of next year. I have a lot of new material. It's just a case of finding the time to record it. I would love to have one month free to just sit in my little castle in the Latvian countryside and record my music. Or maybe in a hotel room somewhere in Tokyo?

Is there much of a scene in Riga?

No, not really. I can probably name five artists which are somewhat interesting and that's it. We have one big international festival and no showcase events at all. For experimental musicians, it's really difficult. I have my audience there but it's always the same people. There aren't many people in Riga so it's difficult to compare with bigger cities around Europe like London.

Are there any other artists from Riga you'd recommend Drowned In Sound and its readers should check out?

What advice would you give to a new artist just starting out?

Just make music with your heart. There are so many musicians trying to figure out what they should write rather than writing what's coming from within. No one else should know your music better than yourself, because only you know what drives you to do it in the first place. I write because I feel I have to write. Write what you feel and the chances are someone else will feel it too.