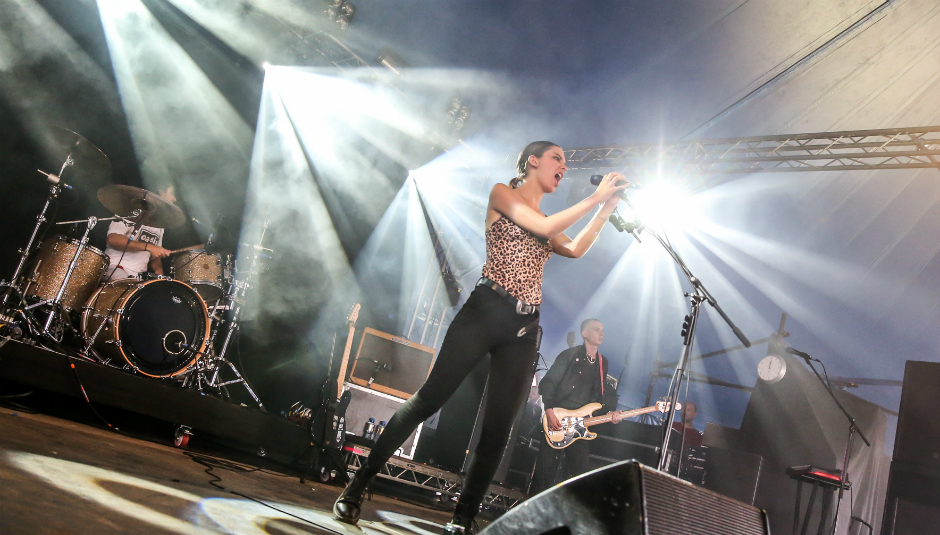 Our Friends In The North: DiS Does Leeds Festival 2017

Our Friends In The North: DiS Does Leeds Festival 2017

It’s probably something that doesn’t need repeating, but festivals are a lot better when the sun blitzes it all weekend. That’s what it does at Bramham Park and means that, for the first time in my life, I can describe the site as almost idyllic.

It’s important because 2016 became such a swamp that it had a genuinely negative effect on the experience. Whether that was as a result of the weather or not, reports of people waiting hours for a shuttle bus out of the festival on the Sunday night didn’t paint a pretty picture. So it was great to see those problems seemingly resolved this year as everyone got on with enjoying themselves.

That enjoyment comes early in the form of Queens Of The Stone Age, one of two secret sets I manage to catch over the weekend. It isn't a particularly well-kept secret so the NME tent is pretty rammed by the time Josh Homme struts on stage. It’s true that they don't exactly dig deep into their back catalogue for their set, but the whole point is to showcase new album Villains. Plus, I’d put a good chunk of money I no longer have on them headlining next year in the same way Green Day and Foals did after their secret sets in previous years.

From one ego to another, Liam Gallagher rocks up to his set to a huge crowd and swiftly rips through ‘Rock n Roll Star’ and ‘Morning Glory’. He sounds good, too. Oasis, Noel’s solo stuff, Beady Eye and now Liam’s solo stuff have always baffled me with their ubiquity but here, for the first time, it seems justifiable. His new material doesn’t feel out of place and ‘Wonderwall’ provides one of the festival’s strongest moments. He’s also, somehow, become a likeable bloke, which feels like the biggest achievement of all.

Muse headline the first night and do so in predictably solid fashion. Following on from their Shepherd’s Bush Empire request show the weekend before, it’s hard for me to get too giddy about this. They do retain the incredible ‘Showbiz’ from that setlist and add an enormous version of ‘Take A Bow’ too. We also aren't blessed with the Brian Johnson-aided performance of ‘Back In Black’, which made me thankful (not for the first time) that I'm at Leeds rather than Reading. They remain one of the strongest repeat-festival headline acts around, even without anything as obscure as ‘Yes Please’ in the set.

Saturday is largely spent lounging in the glorious sun at the main stage. Jimmy Eat World, festival favourites here, give a touching rendition of ‘Hear You Me’. It’s one of those songs that I’ll seek out at festivals no matter what the occasion. From there it's over to the NME to see Lethal Bizzle karate kick his way through another blazing festival set. Anyone who has any issue with grime at a festival could do a lot worse than catch him; not for the first time, he inspired one of the best crowd responses of the entire festival.

I’ve vowed to avoid seeing Bastille again at a festival so it's off to Dillon Francis. Watching a dance set with the sun still up is always a jarring experience but it actually set us up for Kasabian pretty nicely. Speaking of Kasabian, their headline set is the same one they’ve performed dozens of times before, but it was nice to see them close ‘Eez-Eh’ with a jam of Daft Punk’s ‘Around The World’.

It's pretty devastating on Sunday to have to miss Honeyblood over on the main stage but a secret set from Wolf Alice is far too attractive a proposition to pass up. ‘Don’t Delete The Kisses’ is the best thing I’ve heard this year, both on record and now live. Everything about it suggests that they’re only going to go from strength to strength. I'm minutes from missing the start of this so I look forward to more prominent slots from them next festival season.

Sunday also sees the much-anticipated return of Marmozets into my life. They’re on the heavier side of the music that I consume but all the better for it. Frontwoman Becca Macintyre remains an absolute tempest of a performer, and the one-two hit of them into Frank Carter & The Rattlesnakes means that Sunday afternoon is the best run of the festival. Everything Everything are a different vibe entirely but they rival Wolf Alice in terms of the pure brilliance they bring to the festival.

Then it’s Eminem with the least convincing beard I’ve ever seen. His set is a bizarre mix of nostalgia and ambivalence in terms of how it makes me react. Flitting from one song to another means that the audience never has chance to stand still, but it also means that none of the performances really stand out in any way. He plays ‘3AM’, which I adore, but I actually don’t remember it. Fewer songs but longer performances would’ve served this far better.

And that’s it for another year. We leave on Sunday night to avoid the rush and that proves to be a strong move with the M62 in turmoil on Monday. Leeds Festival still has it, even if I’m starting to feel a bit old (at 26). It remains an incredible place for teens to cut their teeth on festivals for the first time, even if it does occasionally descend into resembling Lord of the Flies. Piccadilly Party is still a fantastic way to spend the tiny hours of the morning. Will I be back next year? Don’t you ever ask me that again.