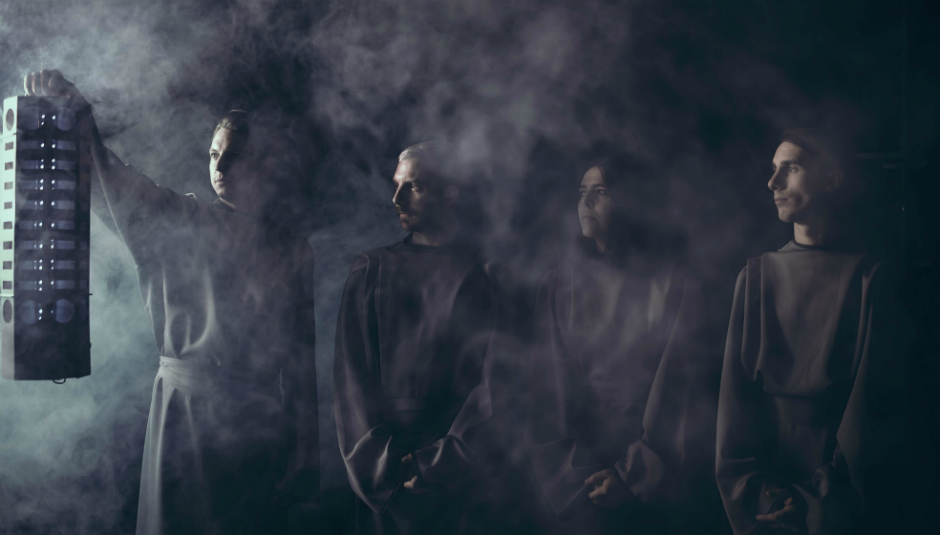 Although we’re now rolling into summer in full force, Liverpool’s spring in music was something to celebrate for the city. For starters, we were knee deep in local talent at The GIT Award presentation from local music bloggers Getintothis, where Bill Ryder-Jones took home the top honour on a night packed with performances from nine of the nominees. The three-time nominee from Wirral was finally recognised for his much-lauded album West Kirby County Primary, with Atlantic Records‘ pop starlet Taya received the One to Watch Prize. Down on the docklands in May with a new layout and programme, the ever-morphing Sound City Festival reigned triumphant with DiS' Editor Sean Adams holding the fort on panels in conversation at the SoundCity+ conference. Elsewhere, once more breathing new life into Liverpool’s creative community, the team behind The Kazimier rose from the ashes with the stunning audio-visual performance ‘Omphalos: Energy Eternal’ at their newly opened Invisible Wind Factory venue. All set for a hot summer in the city by the river, we look ahead to the musical highlights for the next few months.

Liverpool Arab Arts Festival have announced the first wave of acts for their summer line-up, including highly acclaimed Egyptian/UK-based painter, muralist and illustrator Nazir Tanbouli, the UK premier of Belbaladi by Ezzat Ezzat Dance Company, Dublin based Palestinian musician Ruba Shamshoum and Liverpool born Yemeni singer Reham Al-Hakimi. LAAF’s finale event, the hugely popular Family Day, will take place in Sefton Park Palm House on Sunday 24 July, and for the first time will run in conjunction with Liverpool International Music Festival to showcase some of the hottest Arab musical talent, including internationally acclaimed group Tarabband, and Glastonbury showstoppers 47SOUL. This year’s festival, which runs from 16th to 24th July, will explore the theme Undocumented, born from the fact that we are often faced with a daily barrage of negative messages about Arabic people and places, and hear little of the vibrant art and cultural contributions of Arabic artists.

Fronted by songwriter Louisa Roach, locals She Drew The Gun offer dreamy lyrical psych-pop from the banks of the Mersey and were recently crowned winners of Glastonbury's 'Emerging Talent Competition' 2016, a prize supported by PRS for Music and the PRS for Music Foundation. The judges - who included Michael and Emily Eavis - awarded She Drew The Gun 1st place. Prizes include a slot on the fabled John Peel Stage - plus a generous £5,000 Talent Development Award.

Local music magazine and tastemakers Bido Lito! will be hosting a series of musical residencies and experimentations at their forthcoming beach hut gigs on The Strand for four weeks during the International Festival of Business. The Bido Beach Hut runs for four weekends with a different artist taking over each week, performing themselves as well as inviting an assortment of friends and guests down to play live, DJ, and get involved with the musical merriment. Running from 11th June to 3rd July and featuring Amique, Pure Joy, Loved Ones and Beach Skulls the hut will be open each weekend (Sat and Sun) from 10am-4pm. It will be stationed on The Strand just in front of the entrance to The Albert Dock, at the Echo Arena side. For more info click here

Liverpool Music Week have announced that Warpaint will headline this year’s 2016 opening party at Grand Central Dome on October 26. The week-long festival culminates in a closing party on November 5 and will revolve around Seel Street’s new Arts Club venue, with other events taking place at Grand Central Dome, in a move away from past events at Camp and Furnace and the now demolished Kazimier. Tickets go on presale from 10am June 15th at a discounted £17.50, then on General Sale (£20) from 10am June 17th.

Local promoters Hyper Enough come out of semi-retirement on 9th July for a very special performance from Jutland Songs at Maguire’s Pizza Bar. Featuring ex-members of Eska, Dananananaykroyd, and other noisy bands you probably loved (and if not, why not?), they’re joined by Good Grief, Puzzle and Oh Well, Goodbye. Starts at 8pm and it’s £5 in please, which should leave some change for a slice. Nice.

New York singer-songwriter and rock musician Jesse Malin (Heart Attack, D Generation) has announced a short run of 2016 UK headline tour dates beginning at Arts Club in Liverpool on 11th July. The tour, his last in the UK for 2016, is in support of forthcoming new single ‘Whitestone City Limits’, the latest track to be taken from his 2015 album Outsiders which is out now on One Little Indian / Velvet Elk Records.

Father John Misty, aka Josh Tillman, former drummer with Fleet Foxes, will be bringing his music inspired by Waylon Jennings, Harry Nilsson, Arthur Russell, and Roy Orbison to Liverpool on 16th July at The Philharmonic Hall. His absurdist fever dreams of pain and pleasure elicit, in equal measures, the blunt descriptive power of Bukowski or Braughtigan, the hedonistic philosophy of Oscar Wilde, and the dried-out wit of Loudon Wainwright III. Support comes from Bleeding Heart Pigeons.

The godfather of funk and one of the most influential musical innovators of our time, George Clinton & Parliament Funkadelic will be descending in the Mothership to O2 Academy Liverpool for a one-off, full UK live show on Friday 29th July 2016; their first time in the city for more than 40 years. Famed for ‘One Nation Under a Groove’ and ‘Atomic Dog’, he is the single most sampled artist in music history with his signature grooves, crossing all boundaries.

THE BENDAL INTERLUDE – Reign of The Unblinking Eye (Black Bow Records, Out Now)

If you know your heavy music and you’ve been involved in Liverpool’s metal scene any time in the past few years, TBI are a name you can’t possibly have missed out on. Stalwart supports (for good reason) at any local thrash, doom, and stoner gigs, their live show is a force to be reckoned with. Now, their long-awaited and superb debut album has quite literally kicked and screamed its way into the world. According to their own Facebook page their influences include “Buckfast, Bourbon, Bowels and Biftas”, which should tell you everything you need to know already. Together for over a decade, and featuring members of SSS and ex-members of TDON Records’ Heresy Of Thieves, they rock like absolute bastards. Don’t just take our word for it, eviscerate yourselves with a stream of the full thing here:

Ambient art-rock quintet Atlas Eyes formed a couple of years back, and this year the group are set to release their self-titled debut EP. Following on from their well-received debut single ‘Laura’, their new track ‘Mila’ is an anthemic and hope-fuelled slice of intricately crafted, quirky rock filled with all sorts of musical acrobatics and lush vocal harmonies. Already being championed by the likes of BBC Radio 6, and with their live shows receiving rave reviews, there are many important eyes currently swivelling right in their direction.

What do you get when you take one of the members of Outfit and pair him up with an extremely talented, if a little obsessive, DJ and producer? You get God Colony, that’s what. Merseyside born and raised, but currently based in London, the duo have developed a raw, gritty sound on debut outing ‘Se16’ featuring south London MC Flohio. In their own words, it’s a track representing "the sound of south London’s streets, of city life, of the sprawling metropolis and its people". The track is taken from their forthcoming 'Where We Were' EP, due out later this month.

As front man of leading psych kraut-rock heavyweights and Liverpool favourites Mugstar, Peter J Smyth knows a thing or two of how to riff out and play long passages of fuzz-covered repetition, pummelling audiences into submission. Black Smoke however sees a warmer, more introspective Smyth on exceptional form. Seventeen tracks of finger-picked beauty recalling John Fahey and Mount Eerie amongst others, this is a stunning, fragile, and spiritually rich release that deserves a home in every good record collection.

Widnes by way of The Wirral might not qualify them for this column in some people’s eyes, but we’re all about inclusivity here at DiS and Beach Skulls have just unveiled the video for their new single ‘Heavy Pound’, taken from their acclaimed debut LP Slow Grind which out now via PNKSLM Recordings. It’s a surf-influenced, beat-referencing slow jam that liberally sprinkles some Hard Day’s Night magic and slapback vocal all over hazy Americana to brilliant effect.

Whilst we might not have the time or the space to cover everything that’s coming out of the city in as much detail as we’d like to, we simply couldn’t let this bumper crop of new releases from Liverpool artists go unnoticed – check out Drowned In Liverpool Vol. 002 on Soundcloud for a playlist of the best new tracks from our brimming mailbag that we couldn’t find more space for. Tracks come from: Youth Hostel, The Stamp, John Joseph Brill, XamVolo, Oh Well, Goodbye, Tyler Burkhart, Psycho Comedy, Her’s, Trudy And The Romance, The Night Café, Strange Collective, God On My Right and John Heckle.