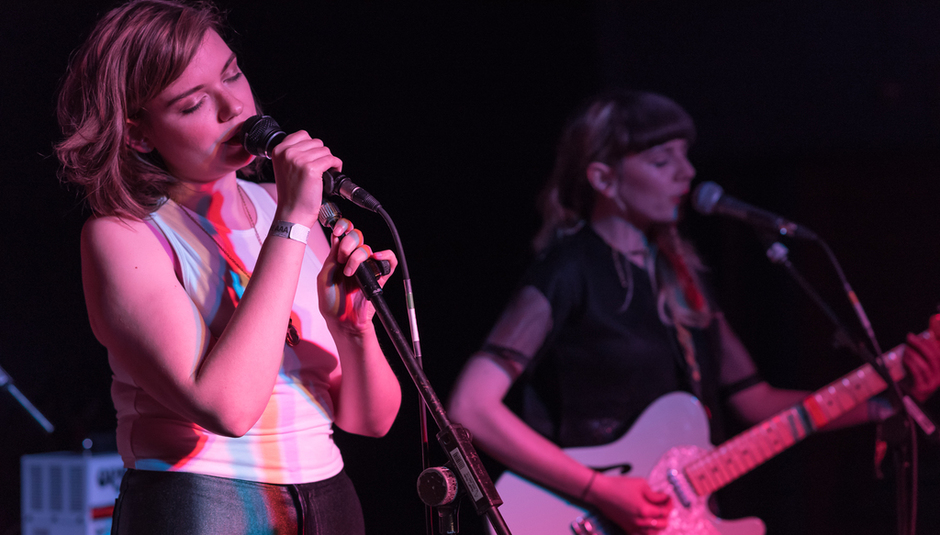 It's Bank Holiday Sunday and we're in Leicester. In twenty-four hours time the result of a football match taking place in West London will turn the city into a world media frenzy. While the city itself engages in an all out party that's still in full swing as we speak.

This afternoon however, we find ourselves in the city for Handmade Festival. Now in its fourth year, as festivals go it's about as independent as they come despite being located in Leicester's O2 Academy complex. Initially the brainchild of Maybeshewill's John Helps, the line-up is curated by a group of independent promoters from venues that have remained close to the heart of the local music scene for decades. Spread across four stages located in the Academy's various rooms, it's a throwback to the halcyon days of Summer Sundae if not quite at that scale just yet. Although the main emphasis is firmly on music, Handmade also focuses on comedy, film, photography and performance art making it one of the most all rounded arts festivals in the region.

Which is just as well considering the large crowd who've assembled at the Cave Stage for comedian, actor, writer and broadcaster Robin Ince. Having been a regular performer at festivals such as Latitude and Glastonbury for years, Ince finds himself in his element here. Witty without being patronizing while opening the floor to questions or just plain wisecracks from those out front, he quickly endears himself to the assembled throng. Afterwards, he takes the time to chat with festival goers long into the evening, meaning we can also add "bloody nice bloke" to his ever growing list of titles and accolades.

Beforehand, scouse post-rockers Alpha Male Tea Party and London based outfit Colour Me Wednesday keep us sufficiently entertained during teatime. While the former sit firmly on the axis between Foals elementary math pop and 65daysofstatic's gloriously eloquent noise, the latter play swoonful indie pop that falls somewhere between the vitriolic lambast of riot grrrl and delicately poised post punk of Sleater Kinney. In both cases it's fair to say we like them a lot.

Next up are London's Big Deal, primarily a vehicle for Alice Costelloe and Kacey Underwood's paeans to one another. However, these days they're a more primal beast and although Costelloe remains in the same spot throughout, she's a captivating a presence. With difficult third album Say Yes on the way in June. Difficult because it documents Costelloe and Underwood's traumatic break-up, we're treated to a set that's both fraught and uncompromising. Backed by long time rhythm section Jesse Wong and Jessica Batour, Big Deal's metamorphosis into a frenetic rock band is all but complete. Watch this space.

Unsurprisingly, Los Campesinos! attract the biggest crowd of the day. Celebrating their tenth anniversary this year, they've been a little quiet on the release front recently. Since 2014's Christmas EP in fact, although plans are currently afoot to record their long awaited sixth album once sufficient funds are available to begin the process. Despite a lack of new material being aired this evening, they play a career-spanning set garnered from their extensive back catalogue that sees the likes of 'My Year In Lists', 'Avocado Baby' and especially 'You! Me! Dancing!' welcomed like old friends who've just returned from a three-year vacation over the other side of the world. 'The Sea Is A Good Place To Think Of The Future' brings their set to a poignant climax, and in many ways it wouldn't be unfair to say they should have headlined.

Nevertheless, that honour fell to Swim Deep and while their set contains its fair share of highs ('She Changes The Weather', 'King City', 'Fueiho Boogie'), there are too many lulls in between to fully justify their bill-topping status. Still, the organisers can feel proud of themselves for putting together such a diverse and carefully planned event and while DiS has to confess at being absent for the first two days (festival and gig duties elsewhere unfortunately on what was an extremely busy bank holiday weekend), by all accounts proceedings went swimmingly well. See you down the front again next year!