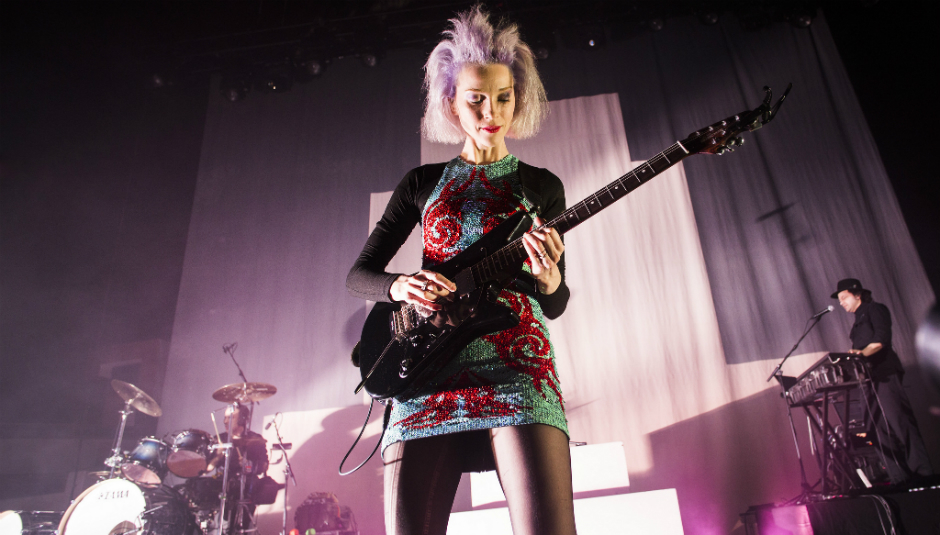 Le Guess Who? Preview - Ones To Watch

Le Guess Who? Preview - Ones To Watch

Utrecht's Le Guess Who? festival continues to go from strength to strength - and this year's edition promises to be the biggest and best yet. With over 100 artists spread across four days and 15 venues, not to mention a few other off-fesitval delights and concerts, there's truly something for everybody. Navigating such a mammouth line-up is, of course, not easy, but as one of the festival's Official Partners, we've picked out ten acts that we can't wait to see perform. See you down the front!

Is Bradford Cox mellowing in his thirties? Revelling in his role as one of indie’s most outspoken contrarians, 2013’s Monomania was a raw, snarling collection of garage rock, a world away from the dreamy psych-pop that launched Deerhunter into the stratosphere. But new album Fading Frontier, written as Cox convalesced from being run over, is their warmest, most content collection of songs to date, and references the likes of Tom Petty, R.E.M, and INXS. Combine that with his reputation as one of the most enigmatic frontmen around – he’s also playing a solo set, under his Atlas Sound moniker – and Sunday night looks pretty unmissable.

“I think I’m going to start playing electric guitar, mostly for the sake of my fingers.” So said Marissa Nadler last year, when we asked her about rumours her next project would be somewhat louder and heavier. Although we’ve yet to hear new material, work on her eighth official album is allegedly at an advance stage, and hopes are high that, alongside some of the stirring, heartfelt songs from July, we’ll be treated to something new come Saturday night at 7.40pm.

Both with Fuck Buttons and as Blanck Mass, the stage name for his solo material, Benjamin John Power has moulded huge slabs of pristine, playful noise into something engaging and accessible. Danceable too, as most of Dumb Flesh concerned itself with jolting your limbs just as as much as frazzling your brain. With new track ‘The Great Confuso’ causing fresh waves in the blogosphere – “like creeping death on the dancefloor” said SPIN – anyone seeking an enthralling dark’n’dirty fix need look no further.

Julia Holter has always traded in a specific sort of beauty – one that’s routinely described as “transcendent” or “ethereal”. And as someone who borrows equally from French impressionist classical music and the writings of Greek tragedian Euripides, it also easy to see why she’s been labelled as being difficult and “avant garde”. But Have You In My Wilderness is different; open, warm, and intimate, it’s her most personal record yet, and watching her match the lush instrumentation to that voice and some hauntingly beautiful melodies will be quite the treat.

Shock tactics have become somewhat de rigueur of late, employed by everyone from Odd Future to Fat White Family with varying degrees of success. And on the surface, it would seem Ho99o9 are treading a similar path; self-styled as “mutant freax”, they have songs called ‘Da Blue Nigga From Hellboy’ and take the concept of throwing yourself into your performance to a whole new level. But their hybrid, aggro punk rap doesn’t merely shock for its own sake; there’s a political angle to their use of sexual imagery and drug talk, and one of airing out grievances. “You gotta make people uncomfortable,” says co-founder Eaddy. Mission accomplished then.

A quick perusal of YouTube for Islam Chipsy videos will soon confirm precisely why our sister publication the Quietus has been raving about the virtuoso Egyptian keyboardist for quite some time. Borrowing from both electro chaabi and mahraganat, but a proponent of neither, his style is pretty much all of his own – pounding his keyboards with fists, flanked by two mesmeric drummers, his music is wildly expressive, euphoric, and utterly unique. “Ultra-fast carnival music with elements that are closer parallels to calypso, soca, New Orleans second line drumming and dancehall” said esteemed writer john Doran, and it’s hard to disagree.

Like the awakening of some malevolent, drone rock Kraken, Stephen O’Malley and co. are back with a new album, Kannon, composed in the wake of his various collaborations with the likes of Scott Walker and Ulver. If you’ve never experience the full force of Sunn O))) live, now’s the chance; a punishing, gut-bothering sonic assault that’s as thrilling as it is disturbing. This is music that will shake your body – and your mind – to its very foundation. Not only that, O’Malley and Greg Anderson have also curated a special four-day program of hand-picked artists both loud and quiet, giving an insight into the tastes and influences that shape his monumental music.

Despite releasing one of 2015’s best albums, this unassuming four-piece from Portland have flown somewhat under the radar – but then, you get the impression they prefer to let the music, and their performance, speak for itself. “Earnest, human stories delivered by one of the fiercest voices in folk-rock” said London In Stereo of their recent show at The Garage, where chills and tears were in plentiful supply.

Shannon and the Clams

Retro rockabilly and doo wop combined with a deep love of all things vintage – and analogue – might now seem pastiche after Jack white et al have turned reverence into a virtual religion, but when a band is a talented – and as effervescent – as Shannon and the Clams, it’s easy to still be seduced. Their lo-fi garage sound has found the perfect foil in Shannon Shaw’s voice; by turns a raspy growl, velvet smooth, or softly crooning, it’s also married to song writing that’s sharp enough to convince that the trio are not simply playing dress up with the past.

Few bands are as deserving of “legend” status as much as German krautrock pioneers Faust. Fuelled as much by their mysterious, 15-year hiatus as their incredible shows or peerless back catalogue, they remain enigmatic; despite myriad line-up changes, the commitment to marrying industrial textures to minimalist drones is as strong, and as intriguing, as ever. Whether they’ll be playing anything from their early, seminal albums, or songs from last year’s J US t remains to be seen, but 40 years young, they are as vital and inspiring today as they were in 1971.