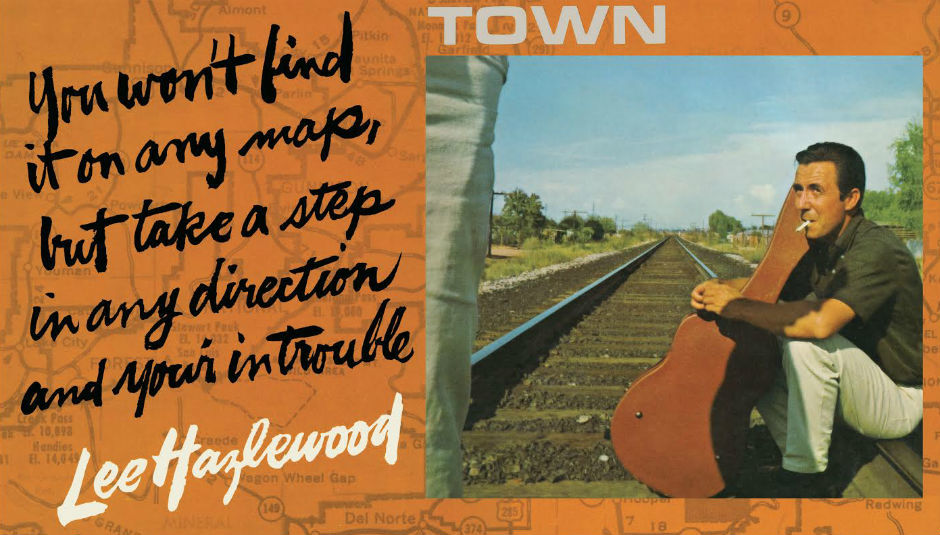 Lee Hazlewood is most famous – and rightly so – for having written and produced Nancy Sinatra’s 1966 breakthrough hit ‘These Boots Were Made for Walking’. His infamous studio instructions to Sinatra – “sing like a 14-year-old girl who fucks truck-drivers” – is the stuff of legend, but he had many more strings to his bow; honing Duane Eddy’s signature guitar sound, developing a huge, wide-screen sound that Phil Spector would later “borrow” and take to new heights, and his own, lush baritone voice that narrated many a tale.

Over thirty-one albums and forty-three years, Hazlewood sang, wrote, and produced, leaving behind a body of work that is almost unparalleled in terms of its scope and depth; one that ardent fans believe deserves to be considered alongside those great American names of Cash or Dylan. But as with any great artist, dig beneath the hits and the worldwide successes and you find hidden gems and under-appreciated masterpieces; Hazlewood in particular seems to have more than most. Who better then than Wyndham Wallace, long-time fan-turned-friend, confidante and, for the last eight years of Hazlewood’s life, business manager, to compile his finest moments in a 21 Song Salute. Enjoy.

Love And Other Crimes: The Songs of Lee Hazlewood, a tribute concert to Lee featuring the likes of Ed Harcourt, Matthew E. White, Caitlin Rose and more, is on Sunday the 25th October 2015 at the Barbican, London. Tickets can be bought here

1) The Girl On Death Row

Lee enjoys the early fruits of his success by combining with Duane Eddy, helping to invent the twang, and shining a spotlight on the injustice of the death penalty. No holds barred!

This, in which Lee and Nancy Sinatra combine forces, is surely the greatest duet of all time.

The irresistible Lee, along with Swedish singer Nina Lizell – “with a face like the red lace I wore” - confesses dark secrets of a fiery romance.

Back off! Nancy Sinatra warns folks to step away from her before her man, Lightning, gets pugnacious

Lee, shattered by a devastating breakup, tries to lure back his beloved with the candid confession that “Where there's sky there must be rain/ Where there's you there's me”.

A bittersweet tale about drowning his sorrow with his buddies after recognising his foolishness at waving goodbye to his baby.

Lee and former partner Suzi Jane Hokum explore the psychedelic possibilities of what some might otherwise have considered easy listening.

Against a suitably grandiose orchestral setting, Lee celebrates the magic of his beloved Swedish island, Gotland, where he spent his early 1970s summers.

9) No Train To Stockholm

Lee earns his spurs as an anti-war protester.

Lee and Nancy get all sentimental about “being a big people” and “discovering you can make little people” without even a hint of smut.

Here Lee proves he can take on other people’s songs and croon with as much sophistication as the very best of them.

Lee and Nancy soar like eagles before one, inevitably, lets the other down.

Lee heads off into the California sunshine with actress and performer Ann Margret for a bucolic bacchanal.

In little over just one minute, Lee confides the truth of his romantic accomplishments.

Lee tells the touching story of an alcoholic dragon and defends his own love of a little tipple.

Lee somehow persuades Nancy to sing a song so sweet that the world never realised it was about people taking acid.

Lee takes just sixty seconds to reveal the darkest secrets of a post-relationship conflict of nostalgic regret and twisted bitterness.

19) We All Make The Flowers Grow

21) These Boots Are Made For Walkin’ (Solo version)

Lee takes time out to revel in the absurdity of having scored a global hit with “a darling named Nancy” and recalls the moment when people round the world said “Why, that can’t be No 1!” But it was, and nothing would ever be the same…