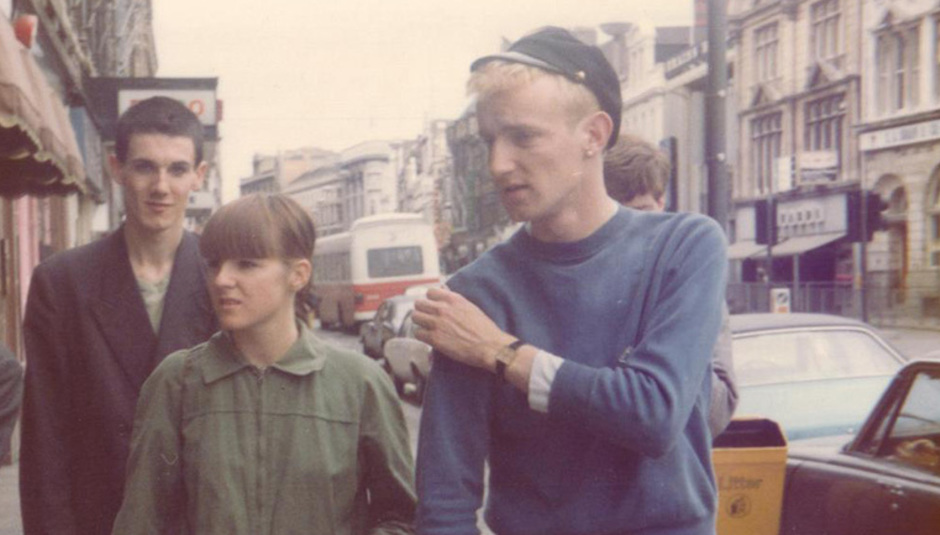 “We never expected to play here” Young Marble Giants guitarist Stuart Moxham says inbetween songs. As the audience collectively applauds and fawns over Moxham’s honesty, the fact remains that, no, we didn’t either. After releasing one of the best debut albums ever, 1980’s Colossal Youth, YMG broke up. As the years rolled on many feared that they would never hear the songs live again. That is until 2007 when YMG reformed for Hay-on-Wye festival and the BB-Mix Festival in France. Since 2007 they have performed regularly, even performing Colossal Youth live at All Tomorrow Parties Minehead Festival in 2009.

But all that that is in the past. Tonight we are sitting in the Royal Festival Hall in the Southbank Centre, where YMG are playing as part of the Meltdown Festival, this year curated by David Byrne. The crowd is a mixture of original fans, making a pilgrimage to witness this cult band in one of the most prestigious venues in the world, and new fans wanting to check out the band for the first time. However, before we get to the main course we have to sample the starter. Tonight, support comes in the shape of Adult Jazz. This quartet from Leeds have been making waves since they released their ethereal drone pop debut album, Gist It, last year. In the most basic terms they sound like Imogen Heap fronting Alt-J while covering Wild Beasts. ‘Hum’ opens with a quiet droney keyboard effect while singer Harry Burgess’ falsetto vocals dance over and through it, until the rest of the band join in. To show his appreciation and enjoyment Burgess dances like the Man From Another Place in Twin Peaks, as the song closes. As statement of intents go, this is up there! As the bassist tunes up Burgess tells us “Talk about tuning up. I saw Joanna Newsom here a few years ago. She took 20 fucking minutes tuning her harp. So you can’t complain if this takes a minute or so” then after a pause “20 fucking minutes…!” all said with a wry smile on his face. After this warming up period, songs 'Springful' and 'Am Gone' offer more of the same and you realise that Adult Jazz are in essence the arty, bookish awkward little brother to Vampire Weekend. They both use the same skittish/stop start rhythms. After another tune up, and reference to Joanna Newsom, Adult are join by a trombonist, saxophonist and trumpeter, affectionately known as the Hornsmen of the Apocalypse on penultimate track ‘Eggshell’. A sufi sounding guitar and an FX loop that wouldn’t be out of place on a Lost Codes release, with the inclusion of the Hornsmen elevates the song to epic proportions. Their 40 minutes were up, and after thanking us and David Byrne, Burgess and co. leave the stage to rapturous applause. In truth it’s the least they deserve.

After a short intermission, YMG take the stage. Open instrumental ‘The Taxi’ features Stuart and Philip Moxham at opposite sides of the state, with a live drummer and an empty microphone in the middle. It is the perfect introduction, not only to the gig, but also the band. Stuart’s trademark minimal keyboards are on display along with the rhythmic drumming. The Royal Festival Hall erupts after the song. YMG look elated, but slightly bashful at not only this sudden attention, but at the volume of cheering. When we calm down a bit Alison Statton joins the band on stage “That was taxi and I’m the bus” the jokingly says. Then as if an afterthought Stattons says “If you cycled here, you get a bonus point from us” before YMG launch into Radio Silents. The crowd cheer when Stuart starts his opening guitar salvo, but when Statton sings the RFH explodes. This is why they came here to see these three people perform together. ‘Choci Loni’ follows up, to more riotous applause. By the fifth song ‘Eating Noodemix’ you can tell that YMG are in the zone. If it wasn’t for the missing spoken word sections, and seeing them perform a few feet in front of us, you’d be forgiven for thinking it was the original studio recording. Before ‘Wurlitzer Jukebox’ Stuart says “So you know the songs then?” a sly grin on his face. Shouts of “Yeeeeeeeeeeaaaaaaaaaaaaaaaaaaaaaaaaaah!”, “I was there in Cardiff in 1979…”, “You’re my favourite band”, “Please play Clicktalk…” “Can you sign my album?” and many others that were drowned out by the cacophony of accolades and cheers. As ‘Music for Evenings’ begins Stuart stops his guitar abruptly. There is a pause, as the audience holds its collective breath slowly thinking “Are they going to continue?”, again a sly smile creeps over his visage as he says “Just checking” then launches back into it. Wide grins break the bands faces, and the audience laughs.

Before ‘Colossal Youth’ Statton tells a story about how when they played a European festival “we were on a hill/slight rise, and behind us were Grecian columns. Everything we play this song I’m reminded of that setting, and the feeling I got from performing there”. Before ‘Searching for Mr. Right” we were told by Stuart that “We used to rehearse in a loft on Broadway (Cardiff) that used to leak when it rained. And here we are. We never expected to play here”. After 50 minutes YMG left the stage. All you could hear was thunderous applause and the sound of chairs flipping up. Meer moments later they returned for a two song encore. The first ‘Calkwalking’. Pockets of the audience sung along from time to time. The gig was closed by ‘Salad Days’, but before they started Stuart dedicated it to “Jean and Terry. Mine and Philip’s parents. They can’t be here today…” after a poignant look across the stage, the Moxham’s launched into their best received song. After it finished, everyone knew it was over and after a standing ovation that lasted, forever, but was probably in actuality a few minutes YMG left the stage, the house lights were raised and we shuffled out, safe in the knowledge that we’d witnessed something remarkable.

Meltdown Festival: Planet of the Apes...