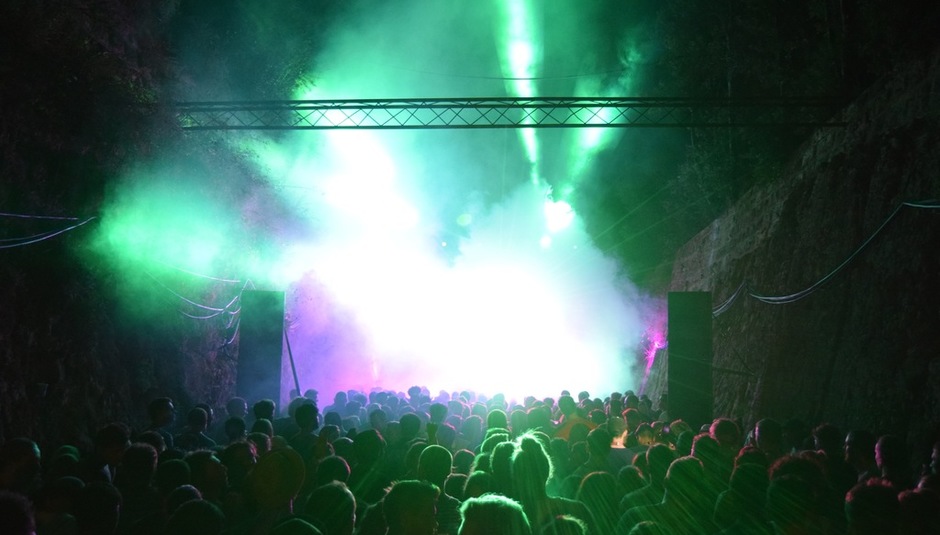 Dimensions is a festival that enjoys stunning views, glorious weather, excellent soundsystems and a healthy bill bisecting the best of electronic music from across the western world. In 2015, it also enjoying the funk. George Clinton – funk’s godfather and personification – has parked his mothership on the festival’s final evening.

His multicoloured dreads and ragged beard may be banished in favour of a bald pate and close cropped goatee, but musically Clinton still lets it all hang out. He’s aided in the pursuit of maximising his sound by an extensive crew of tightly drilled musicians, singers and hype men, all of whom he is old enough to have fathered.

Indeed, with Clinton now 74, the age gap between the bandleader and each of his cohorts could be counted in generations rather than years. This only helps as hits that have themselves notched up four decades on the shelf maintain their youthful vigour, with Clinton’s own energy compelling.

‘One Nation Under A Groove’ is an irresistible opening gambit, its rising choruses buckled to one of the funkiest bass lines ever conceived. Whether it’s dropped right at the start of the set just to get it out of the way or in order to turbo-charge the dance floor, it works: from here on the party never stops. And why would it when the band have ample more classics to drop into their extended cosmic jam. ‘(Not Just) Knee Deep’ provides the weekend’s sing-along moment, its harmonic vocal scales instantly recognised by even to those who didn’t know they knew it, due to De La Soul’s celebrated sample in ‘Me, Myself and I’.

Recent Clinton sets – at Wilderness earlier the same month, for example - have featured extended showcases for various members of the tumescent ensemble, foregrounding the P-Funk originators’ forays into latter-day R&B and hip hop. Here such diversions are ruthlessly abridged, a head-bobbing rhythm instead insistently maintained over the show’s two hour duration. As a result, George Clinton and a group that are probably the most traditional ‘band’ on the bill (and when can that have ever been uttered about any incarnation of Parliafunkadelicment before?) sit flawlessly as the headline act of what is, essentially, a house and techno festival.

Of course, both those genres owe more than a little to the Clinton’s pioneering funk experiments, and the expectation surrounding his appearance seems palpable in performances across Dimensions’ five days. Moodymann, following Clinton onto the festival’s largest stage, pays explicit homage, as in their name (taken from Funkadelic’s 1973 album and title track), as do Cosmic Slop DJs, who open the same stage two days running.

But Clinton’s influence can be heard more subtly in other places. Underground Resistance - whose socio-political past draws from an understated but integral part of the Parliament/Funkadelic legacy – are Clinton’s clearest rivals for show of the weekend. They deliver a potent performance of what founder ‘Mad’ Mike Banks has dubbed ‘high tech funk’, live sax intentionally heightening the element of ‘funk’. They certainly get a heavy groove on.

Earlier Lone has built up a pulsating shimmer in The Moat – a great stage which is, as you may have guessed, in a moat in the 19th century fort the festival calls home. Following UR, Surgeon delivers a thick, throbbing dose of shapely techno before Blawan adds a harshness which does nothing to stop it from being a seamless conclusion to the evening’s entertainment.

Another consistent thread at the festival is old school drum and bass, with festival mainstay Goldie leading a strong Metalheadz line up on a Sunday afternoon boat party. It’s good to see Source Direct back from an unhappy decade to bang out the classics in an afternoon heavy on tracks by Krust and Adam F. The spacious bass of that Nineties sound sits well atop an ocean and it all culminates with Doc Scott showing up Goldie in a good natured tussle at the decks – 'that’s what it’s all about: two men having fun together' as MC Visionobi puts it.

Loefah successfully gets in on the DnB action too, but deserves yet more praise for his tight ‘History of Chicago’ set. Elsewhere the Ballroom stage – inside one of the fort’s little turrets - was a consistent delight whoever was playing, thanks in part to its exclusive 75-person capacity. It never felt more special to be there than the night the full moon rested above the trees behind the DJ booth.

That was also the night Juan Atkins proved it is still possible to wow a crowd with vinyl before Space Dimension Controller suggested new ways of opening up rhythmic seams, even dropping a procession of military drums 50 minutes in.

Even an act as sometimes cerebral as Four Tet is not immune to the prevailing funk in the air, dropping obscure Bahamian group The Beginning of the End’s ‘Funky Nassau’ at the end of a storming DJ set on the Thursday. That track followed Kieran Hebden’s own production of Omar Souleyman’s ‘Wenu Wenu’, the Syrian wedding singer’s tune proving apt for an Adriatic dance floor. Before that he’d concentrated on his own music-making, bending and recasting sound as much as mixing and beat-matching, and always delighting.

The night is a kind of redemption for Kieran Hebden after a testing performance at the opening party – a separately ticketed event away from the fort at the stunning Roman amphitheatre in nearby Pula. Seemingly playing to the austere venue rather than the overexcited crowd of a dance festival’s opening night, Four Tet gives the glistening glory of 2010’s ‘Plastic People’ an almost interminable build up before finally letting the beat drop.

It’s all incredibly tasteful, but hardly what’s required, especially after Little Dragon’s dire grooves had diffused an atmosphere previously electrified by Floating Points, who stole the night. Properly delivering on the promise of a live experience, programmed pulses are augmented with an array of skilled session musicians, on percussion, strings and even saxophone (I really hadn’t expected to see three of the things over the course of the event). A glistening set both consecrated the ancient ground and shook its foundations.

This glorious opening was about as far from the funk of George Clinton as the weekend offered. Even then it would have been no surprise to see turn and see Dr Funkenstein nodding his head in approval.