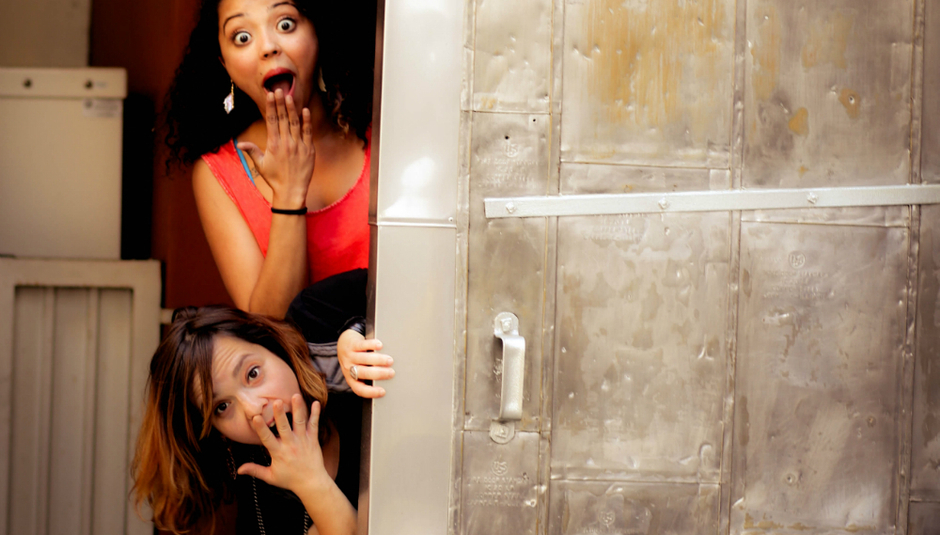 Say the words “Ooh, stick you” to any British person between the ages of 20 and 40 and they will involuntarily complete the phrase: “Your momma too (and your daddy)!”

Daphne and Celeste gambolled onto the pop scene in 1999, back when there were five members of 5ive, seven members of S Club 7 and Smash Hits was still just about readable. For around eighteen months or so the two teenagers terrorised the UK pop landscape, releasing the distressingly catchy girl-on-girl bullying anthem 'U.G.L.Y', starting beefs with Christina Aguilera, 5ive fans and Reading Festival goers, and playing any number of Butlins holiday camps. Then they faded away, retreating to America to act and write and sing, their bubblegum pop hits relegated to Now That’s What I Call Annoying! compilations at the bottom of the bargain bins in Woolworths’ closing down sales.

But, after 15 years away from the spotlight, they’re back. Glittering new electro-pop tune 'You And I Alone' was written and produced by British producer Max Tundra. It’s a very internet collaboration - Tundra contacted Celeste over Twitter, then the three Postal Serviced the recording in 2011 with Daphne and Celeste in New York and Tundra in the UK. The single germinated for four years until stars and schedules aligned, and the world was deemed ready.

Now in their 30s, Daphne (real name Karen DiConcetto) and Celeste Cruz are ready to show off a different musical side. 'You and I Alone' doesn’t come with the hard-edges of 'Ooh Stick You' or 'U.G.L.Y.', and the tinned pop backing tracks have been swapped for twinkly electro beats and a synthy minimalism. There’s no calling anyone out for a fight behind the bike sheds or mindless insults in the lyrics, which were also penned by Tundra. “He seemed just weird enough,” Celeste tells us when we ask why they decided to work with Tundra. “And the song was kind of a perfect evolution of our sound, I guess you could say.”

Daphne and Celeste are somehow exactly what you’d expect and completely surprising at the same time. They laugh and talk over each other like old friends, and they’re positive but realistic about life, the internet, music and their careers. They like Haim and are “obsessed” with Sufjan Stevens and FKA Twigs, and every few minutes, Celeste’s puppy barks in the background of our call. Unlike their pop peers showing up on The Big Reunion or sinking everything they have into comeback tours, you don’t get the feeling that Daphne and Celeste are in it for the money or the fame; they seem to be in it for the fun.

While many people may cringe to think of the shapes thrown at school discos to 'Ooh Stick You', they themselves could not be less embarrassed about their novelty pop past. They talk about it with no trace of irony or self-deprecation in their voices. In fact, Daphne and Celeste seem to have nothing but fond memories of their time in the pop trenches. Even the infamous Reading set, during which they were booed, pelted with bottles of rancid festival piss and faced with banners about how shit they are, Daphne describes as “one of our greatest achievements from our time in the band”.

“We were like this pop band, we had no instruments and we played the main stage at the Reading rock festival, how ridiculous is that?” Despite the pride in her voice, scheduling a novelty pop act before Slipknot at Reading during the early days of nu-metal still seems like an act of bullying to me. Still, given that they’re both women, I guess we should be grateful to Reading 2000 for even putting them on the bill.

Even after the abuse at Reading and the backlash against 'U.G.L.Y.' which was derided as a pro-bullying tune, the one thing Daphne and Celeste don’t feel is unfairly treated. “I feel like when you say “unfairly treated” that’s like the perfect way to phrase it,” Celeste says thoughtfully. “Because we were always fairly treated. We ruffled feathers. We knew what we were doing every time, so we weren’t surprised like, “Oh my god that’s the reaction we got?” - it was never like that. We were so fairly treated. If we were going to dish it out, we were going to be able to take it.”

Unlike today’s pop stars who are media trained to the point of tedium, Daphne and Celeste were thrown in front of journalists with little-to-no guidance. In old issues of Smash Hits, they talk smack about other pop stars (“5ive can’t sing. Have you ever heard J try to hold a tune?”), invite readers to fight (“write back in to Smash Hits and I’ll give you my address and you can deal with me”) and make stuff up (“We called a hotline where you adopt a kid and they sent us Daphne. Her real name is Lee Dubois or something, so we changed it to Daphne”). Rather than playing the promotion game, hitting key messaging and providing quotable soundbites, they sound like kids having fun.

“We just completely disregarded the fact that it was, like, an interview people would read, as opposed to just trying to make each other laugh,” Daphne says as Celeste laughs. “But if we had been like little Energiser bunnies, completely and totally truly manufactured in terms of even our answers, I think that would probably be really hard to look at now. Or maybe you’d have Stockholm Syndrome or something, I don’t know.”

Is it a relief, then, that they didn’t have social media back then? Daphne is emphatic: “Oh my god, I’m so glad there was no such thing as Twitter. I can just imagine us getting into Twitter wars. And also, the instant gratification; if someone’s responding to you right in the moment, I feel like things could have really escalated quickly and furiously. And possibly tragically.”

“Yeah, I also think it would have censored us a little bit,” Celeste adds. “When you’re able to say something and get this immediate reaction from people, you almost then start backtracking and being really cautious of what you say. It’s almost like you can’t express yourself naturally because you’re always being judged.”

“A lot of the time what would happen is just our words would be misconstrued because no one briefed us on English slang compared to American slang,” Celeste adds, like the time Daphne said Richie from Five looked like a muppet.

“The thing is Karen,” Celeste says, “And I’m going to stand by this, it wasn’t nice but literally it was very true.” I mean, they’ve got a point:

It’s clear that they had a lot of fun, whether it was taking over the letters page of a pop magazine or dressing as Run DMC for H from Steps’ 80s-themed birthday party (the birthday boy went as Adam Ant). They’re still friends with some 90s pop survivors on Facebook, while others have fallen out of touch. Who was particularly nice back then?

Celeste props for Billie Piper and Steps, while Daphne goes more leftfield: “You know who was nice - do you remember that guy Adam Rickitt?” Literally three people in the world remember Adam Rickett and Daphne and Celeste are two of them. Maybe he stood out because he wasn’t horrible, because, as Celestes says, “Pop is hard. There were a lot of nice rock people that we ran into, but pop... Oh! S Club 7 was nice. At least 5 of the 7 were nice at any point.”

“In many ways, Daphne and Celeste are the perfect pop band,” Max Tundra tells us later. “And pop is the most divine form of music. When Daphne and Celeste first came out, it wasn’t cool - it was all NME and throwing bottles of piss. But with artists like Taylor Swift and FKA Twigs now, you’ve got a non-ironic mass appeal - there’s no such thing as a guilty pleasure anymore.”

Does that mean the time is right for Daphne and Celeste to make a comeback? Maybe. But the girls don’t have all their eggs in this one basket. Celeste has other music and acting projects on the go, while Daphne (or, to use her proper name, Karen) has co-written an original drama for ABC Family called Recovery Road, the cast of which is front-loaded with Skins and Eastenders alumni. There’s talk of further work with Max Tundra, including live shows with electro reworks of their millennial hits and possibly even a full record.

Only one thing’s for sure: whatever Daphne and Celeste end up doing after this, they’re going to have a good time doing it.