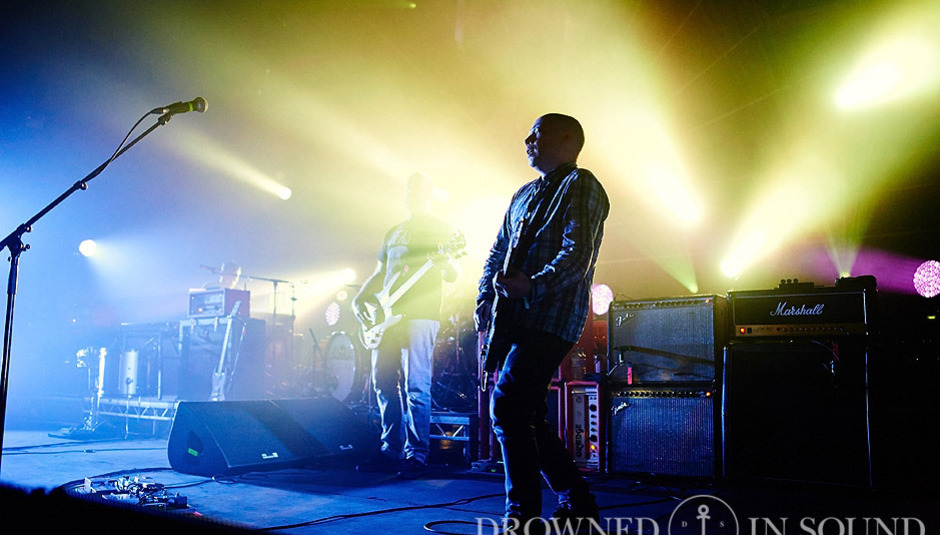 The great thing about Simple Things festival is that it gives a platform to some of Bristol's incredible local acts, to an audience that may not have otherwise ever taken the time to check them out.

Something Anorak kicked things off at Start the Bus and this two-piece are slowly but surely becoming one of the most exciting acts to come out of the city for a little while now. Their debut album, 'Tiny Island' will be coming out on Howling Owl Records on Nov 3rd and it's easy to see why they've been welcomed into the family - the falsetto vocals, teamed with woozy guitars and oddly catchy song structures assures us that this is a record to watch out for.

The Lantern plays host to four-piece Scarlet Rascal who continue to prove their worth in the local music scene. Their moody-indie output is perfect for Colston Hall's little back room and the band pull an impressive crowd for the start of the afternoon. Supporting Hookworms at their recent Cardiff date, it's clear that they're going to continue to steal the hearts of Interpol and Joy Division enthusiasts across the country.

Next up is Grubs; consisting of members of Trust Fund and Joanna Gruesome, the three-piece are an incredible force of Weezer-inspired garage rock with the Start the Bus platform proving the perfect way to showcase their infectious, less-than-two-minutes tunes. You can't help but fall in love with their set - especially single 'Dec 15th,' that will stay in your head for days and days and days.

Idles open up the stage over at the O2 Academy, proving a huge moment in this band's career. New single 'Queens' sees the guys take things up a notch, with their post-punk effort proving as catchy as ever. Lead singer Joe Talbot is a force to be reckoned with, as the other members of this band produce the kind of energy you can barely believe. Bringing their scuzz-fuelled instrumentation to a wallowing crescendo, it's wonderful to see this five-piece really come into their own.

Oliver Wilde takes over Colston Hall's foyer later on and if you're a reader of the Drowned in Bristol column, you'll already know that I'm a huge, huge fan. The singer-songwriter has perfected his set over the past few months - playing End of the Road and The Great Escape, it's clear that the outfit have become more confident in their performance. The hall is absolutely packed and rightly so - this is the last we'll see of this set, as Wilde now tucks himself away to work on album number three. It's wonderful to witness his assent over the past few years and I for one can't wait for new material.

Spectres take on the O2 Academy 2 and the small space is brilliant for their wall of noise. After signing to Sonic Cathedral earlier this year, the four-piece have gone from strength-to-strength. After a string of highly acclaimed festival appearances, the band have perfected their deathly-psychedelic output, much to this crowd's delight. Watch out for these guys - I have a feeling they're on the cusp of national domination.

How to Dress Well's vocals

It seemed odd to put How to Dress Well on at 3:30pm in the massive Colston Hall area. His slow-jam style would suit a gloomy underground club, around the midnight mark. Nevertheless, Tom Krell pulls in an impressive crowd and the bellowing bass undertones of his set cause this massive hall to shake from the floor right into our chests.

There's beautiful visuals and the band are faultless in their execution and yet, this crowd don't seem to respond too well to the performance. Maybe it was the set time or the lack of alcohol consumed but it was a bit disheartening to see the hall so silent after such a wonderful production.

Nevertheless, Krell impresses. His faultless vocal is stunningly beautiful, with songs such as 'Words I Don't Remember' standing out as one of the best releases of the year. Cleverly using dynamics throughout, the quiet moments are to be admired the most, as he silences this rather chatty audience during an a capella moment. Seriously, this is a voice that is one to be treasured - it's just a shame this audience didn't think so.

Over the past few years, we're all-too-often faced with a wall of phones getting in the way at gigs. It's incredibly frustrating, annoying and disheartening but there was one band at this festival that magically made them disappear. Atlanta's Black Lips pull in an incredible crowd, who as soon as they step foot on stage, go absolutely crazy for the garage-rock outfit.

This crowd sing; they shout, they hug strangers, they get incredibly sweaty - all with a huge smile on their faces. This isn't the kind of mosh-pit you'd be terrified of entering... it's more a crowd of long-lost friends you can't wait to dance the heck out of this set with. The band clearly feed off the energy, as they rip into their guitars and bounce up and down the stage.

Witnessing toilet rolls flung across the venue, with each new song provoking a louder reaction than the last, this was the kind of show that reminded you of what rock gigs were like before technology took over. It was fun as heck and as everyone left with arms around each other, it was a definite highlight of the festival.

Now, I'm the last person to really understand "PC Music". I still don't get it but obviously I had to go and check it out for myself after all those think pieces. The Simple Things team did a wonderful job of turning The Firestation into a haven for those attendees that prefer the house / techno / PC Music vibe; with a huge courtyard, decorations and plenty of food on offer, it felt more like a summer festival away from the city centre.

SOPHIE is absolutely packed out. Mostly consisting of 16-18 year olds at the front, covered in feathers and glitter and older, curious onlookers at the back, it's obvious everyone wants to know what this 'SOPHIE' is all about. As soon as he hits the decks, the room erupts into a frenzy of excitable flapping arms and whoops, with all the younger members of the audience seemingly knowing every word to just about every song.

Single 'Lemonade' causing a raucous of monumental proportions and whilst I'm still not really 'getting it,' the energy in the room is absolutely infectious. I can't help but nod my head along to the tunes... even shuffling my feet at times. The front-end audience grab their phones, shouting to their friends about the set and waving the device in the air, proving that SOPHIE is certainly one to talk about. Whether it's a genre to stay, we'll have to wait and see.

Nabbing Mogwai as a headliner for the festival was a great move by Simple Things. Blending genres across a range of venues, Mogwai are the perfect middle-ground for those who love everything from drone to rock to indie. Putting them on in Colston Hall was an even better move by the team, as from the first strum, the acoustics are absolutely breath-taking.

Of course, the band don't interact too much; muttering the odd "Thank-you" between songs, they let the music do the talking. Playing pieces from their latest album 'Rave Tapes,' the crowd immerse themselves, eyes-closed with the odd pint swaying in the air in the distance.

Dripping in blue, purple and pink lights, the setting for this Glasgow five-piece proves that this is a performance to go down not just in Simple Things history but as one of the best headliners to take to the Colston Hall stage ever. It's just a shame that the venue built up a ridiculous queue, with a one-in-one-out policy, after the hall was only 3/4 full with plenty of room right up at the front.

Nevertheless, this year's Simple Things festival was the best yet. Solidifying a strong range of venues, from the intimate to the enormous, and securing a delectable range of genres and artists, there was quite literally, something for everyone and anyone to enjoy.

Lead photo of Mogwai by Gary Wolstenholme from their show in Rotherham a few nights before. In Photos gallery here.

Tabloids, Young Fathers and The Mercu...