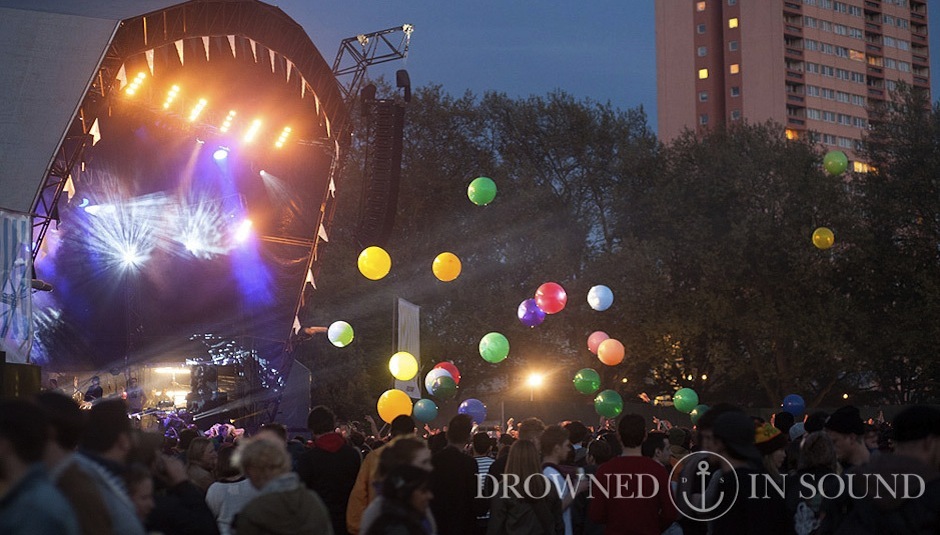 Field Day is the pantomime villain of the festival circuit. But in spite of the criticisms cascading across internet forums whenever it gets mentioned, it has expanded its success year on year, pulling in droves of people who presumably simultaneously both enjoy it and moan about it. It’s the festival people love to hate. It’s too quiet, it’s too loud. There are queues, there are crowds, there are drugs, there’s police, there’s people with – gasp - beards.

Don’t believe the noise. For any of its previous faults, this year’s event was brilliantly executed; free from overcrowding and sound bleed, and packed with great music and friendly people.

One of the main things which strike me on the Saturday is how genuinely eclectic the line-up is, while operating within the parameters of hyper-trendy east London tastes. There isn’t really another comparable event in London, with the same buying power for acts, and the wandering diversity. (Compare this to say, Lovebox, with its much narrower musical focus. You’re not going to get Fat White Family headlining a tent next to SBTRKT there).

In close succession I see Sophie and Courtney Barnett – two acts which could hardly be more different from one another, but both brilliant representatives of the up and coming alternative music which Field Day excels at showcasing. Sophie’s set was a mind bender; offering as much of a challenge as an invitation. Wonky beats suddenly dropped into trapdoors of silences and tempo jolts, with the producer’s trademark sugar-pitched female vocal samples arching over the blipping chaos. Barnett is a charming contrast, offering new material alongside breakout chats like ‘Avant Gardener’, playing with more rugged riot-grrl intensity than her cleaner recorded sound.

As mentioned, one of the main criticisms of Field Day was always overcrowding in tents, and so the outdoor main stage is an inspired, long overdue addition. An early evening set from Blood Orange is a highlight; the thick, mid-tempo grooves offsetting the humidity of late sunlight perfectly. And at the end of the evening, we’re spoiled for choice. Metronomy on the main stage open by dropping big hitters early on, with new single ‘Love Letters’ alongside ‘The Look’ setting a bona fide Headline Set into motion.

It’s a crowd-pleasing performance, but still I’m tempted to look into Danny Brown in a nearby tent, whose spitfire, nasal delivery is swamped by colossal and thunderous bass. For those who’ve made the decision to forego the summer’s evening for the confinement of a tent, it’s probably the perfect soundtrack, not to mention a great counterbalance to the crisp freshness of Metronomy outside. Far from being overcrowded, it’s a pleasant cap to the Saturday to have been able to split my time between the two clashing sets with ease.

Contrary to its misleading name, Field Day is actually Field Days this year. Of course, this isn’t the first time that Field Day has played around with turning the event into a full weekender. In 2012, the organisers put on an alternatively branded Apple Cart Festival for the Sunday, billed as a more relaxed, family-friendly day with a stronger focus on acoustic leanings. For all its charm, it wasn’t a massive success, and didn’t even survive a second iteration.

This year, they’ve added the Sunday under the Field Day banner, but they still didn’t seem to be completely sure about what to do with it. Undoubtedly, it was an excellent day, but with a heavily reduced programme and an earlier finish, on paper the line-up feels a little like am extended prelude to an open-air Pixies gig.

But in practice, it pans out gorgeously. In spite of the ominous forecasts right up until the morning, the weekend’s sun streak continues, and gets even hotter.

It’s a lazier day, with people sprawled out on rugs and cushions around the main field for the afternoon. The programming and the weather align perfectly on this one, with the hazy shoegaze of Temples and The Horrors providing a dreamy soundscape for those who just want to lay back and bliss out, but also plenty of rhythmic energy for those down the front. With moments like Temples’ ‘Mesmerise’ sloping into extended wig-outs of looping repetition, both camps of the audience are equally satisfied.

But the centrepiece of the Sunday is undoubtedly Pixies. As they take the stage, the atmosphere is at its most heightened for the whole weekend. By three songs in, a rendition of ‘Debaser’ has the crowd drowning out both the lyrics and the riffs in impassioned sing along. It might sound like an irritating love-in, but the outright joy of thousands of people dancing so giddily to the sunny scales of ‘Here Comes Your Man’ is impossible to resent.

All the while, the set successfully evades accusations of nostalgia plundering. Not only do the band fearlessly put new material alongside the stuff which (let’s call a spade a spade) most of the crowd are here to hear, they still play 30-year-old material with razor sharp intensity. And at heart, Pixies are an accessible band, with festival headlining choruses attached to every song. It closes off the weekend with one thing which Field Day nearly lacked: a defining festival moment. And according to one Drowned in Sound forum user, it was ferociously audible up to half a mile away. That’s surely the kind of bleed on which Field Day can build a better reputation.

Coming soon... In Photos gallery and video highlights from this year's festival.