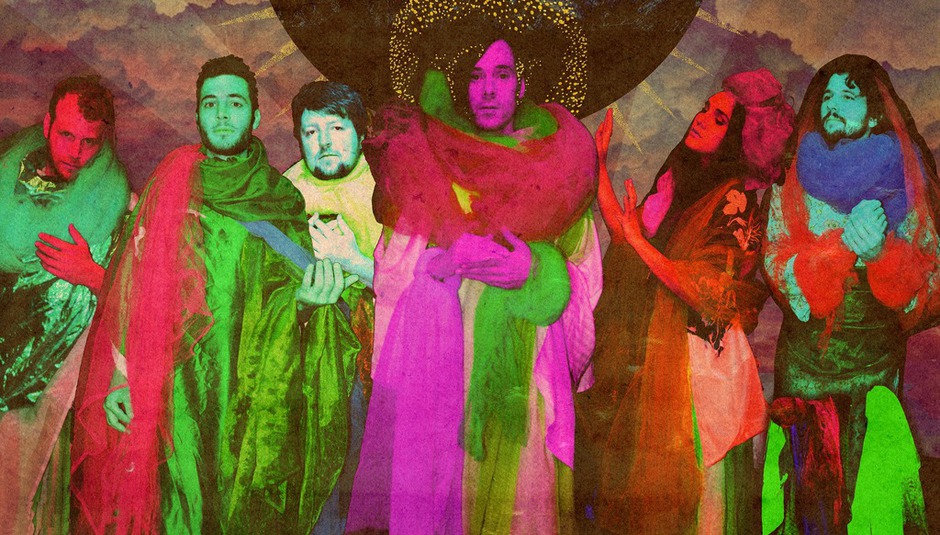 At this point in of Montreal’s career, their only remaining constants are their ever-changing nature, and Kevin Barnes himself. With the breakthrough Hissing Fauna, Are You The Destroyer? taking them out of the realm of twee indie pop into eccentric electro-glam-funk, they soon took another sharp left-turn into darkness with last year’s Paralytic Stalks. But with its completely live guitar-drum arrangements and alt-country influences, new LP Lousy With Sylvanbriar could be the band’s biggest departure from recent form yet.

“I completely forget that I rode on stage on a horse, or performed naked and stuff”, Barnes tells me. “People ask: ‘how does this new record fit into the context of that?’ It doesn’t at all… These songs aren’t funky, they aren’t sexy. There’s not as much bravado or strut. It’s a totally new thing”

In contrast to Barnes’ recent working method of writing and recording completely alone before taking the songs on the road, Lousy With Sylvanbriar rids itself of flamboyant studio experimentation and brings others into the creative process. “I wanted it to involve more people, to feel more collaborative and be communal”, Barnes tells me. “It’s a moment in time. For better or worse, this is how we played that song that day or that night. That’s what it is, and that’s what it’ll be forever. We were all really emotionally invested and excited. In a weird way, I feel more connected to this record than I have to any record in forever”

But while Lousy With Sylvanbriar is undoubtedly a stark shift in sound, it wasn’t completely unforeseeable. A few years ago, around the time of the release of False Priest, Barnes and of Montreal gave up on backing tracks, and began performing in concert as a completely live band. “I got really bored being a slave to a rhythm track”, Barnes admits. “If you play with beats as a backing track you’re stuck in a certain tempo, and it’s going to sound the same every night. Starting with False Priest, I wanted to be more like a live band, and I wanted there to be more room for spontaneity and unpredictability”

And alongside Barnes’ new romance with live arrangements, the collaborative feel of Lousy With Sylvanbriar can also be read as a reaction to the hyper-introspective Paralytic Stalks. “When I made Paralytic Stalks I was on this weird sleep cycle where I would always sleep eight hours a day, but it would always be at different times”, Barnes explains. “I think that record has the dark side of being in this insular thing where you’re making everything by yourself and it doesn’t matter what time it is or what social things you’re meant to be doing. With ...Sylvianbriar, I wanted it to feel different”

In light of these strands of the band’s recent history, it becomes easier to understand how Barnes ended up creating something like Lousy In Sylvanbriar. “After I made Paralytic Stalks and I finished touring I said: ‘I just wanna make a band record’. Just a bunch of people in a room together, capturing a moment in time, rather than labouring over it for months and months… I wanted it to be immediate [with] aspects of everyone’s personality and style so it becomes a really personal thing”

Here Barnes appears to be flirting with a contradiction. Throughout our conversation, he uses two words more than any other to describe the record: ‘collaborative’ and ‘personal’ – two adjectives which feel like they should be at odds with one another. Undoubtedly, the songs which make up the new album have an unmistakable sense of shared authorship to them, with the fingerprints of the various musicians successfully marking the recordings. But they’re also some of Barnes’ most direct performances in some time – the towering layers of harmony stripped back to single track vocal takes; the alter-egos replaced with first person pronouns and named references to his family.

“I think that maybe somehow having a group of people around makes me feel less vulnerable in a way”, Barnes offers by way of explanation. “They’re my allies, they’re on my side, and so I don’t feel as naked. To a certain degree, it helps me speak in a more intimate and confessional way. With this record I wanted it to be more lyric-driven and that’s one reason it’s less ornamental, schizophrenic and fragmented. I wanted it to feel like someone was singing a song to you”

This helps to explain how Lousy In Sylanbriair succeeds in remaining so engaging, even as it initially seems more sonically conservative than what we’re used to from recent of Montreal. Above all, Barnes always exudes a genuine excitement about whatever he’s currently creating, and this provides him with the ability to express himself with sincerity on each album, even while they’re wildly different from one another.

He’s also always completely immersed in whatever he’s currently inspired by. When I met him around the time of False Priest, he couldn’t stop talking about the influence of bands like Parliament. Today, he’s gushing about Dylan, Cohen, Young and Plath – influences which he’s found easier to explore through collaborative musicianship. It’s quite a leap in source material within the space of just two records, and it’s the sort of restless evolution which keeps of Montreal so vital. “If someone says: describe your music, I can describe what I’m doing right now, but it won’t describe what I did five years ago”, he says, putting the case perfectly.

And in five years from now, I fully expect this interview to be little more than another faded snapshot of Barnes’ nebulous past. But for the moment, we can be as excited as he is about what he’s creating right now. Both a rejection and an extension of the band’s recent history, Lousy With Sylvanbriar finds Barnes refracting himself through a thrilling new set of influences and impulses. In collaboration, Barnes has found the space to become even more personal, and the results are some of the most organic and direct pieces of songwriting of his restless career.

Lousy With Sylvanbriar is out now. Of Montreal are on tour now:

"I’m sick and tired of cowards"