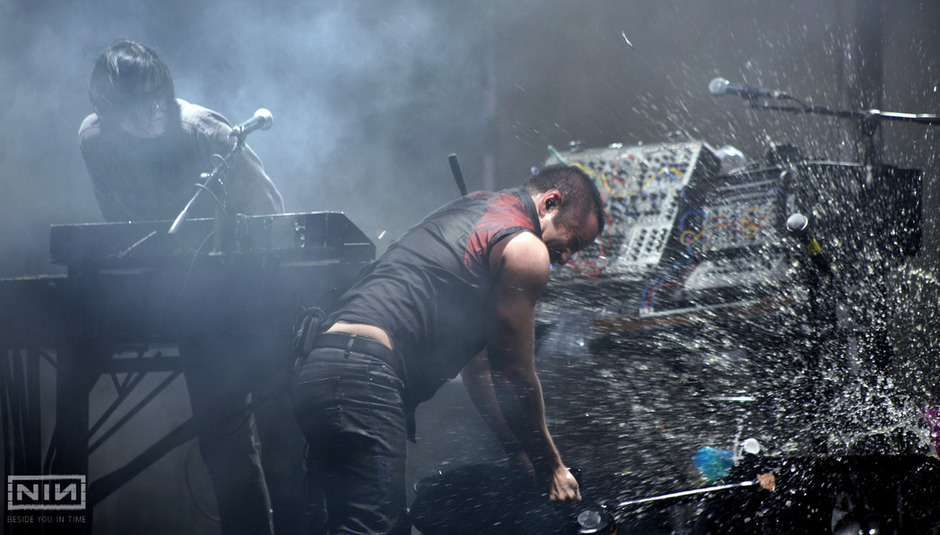 A note from the author: Nine Inch Nails have been one of my favourite acts for more than half my life. So, when the announcement came that the band were back together for new album Hesitation Marks, I figured it was the perfect time to re-listen to the entire discography, and put together some playlists of some of the different sides of the band.

This article (and the few that follow it) not only provide a potted guide to the highlights of the NIN catalogue, but are also a highly personal look at the music of a man who I firmly believe will go down (probably on his knees) as one of the musical geniuses of our time.

I've always loved the aggressive side of Nine Inch Nails. In fact, it was the group's most outright angry piece of work - 1992's Broken EP - which first sparked my love for the band. I remember it well: it was Christmas 1994, and I had requested the EP from a long-suffering 'music fan' uncle (my family had long before given up trying to guess what music might take my taste, even at the age of 14. After the usual family festivities died down and my parents had made me and my brother walk our presents home in the cold December evening, I fished the album out, slotted it into my Sony Bass Boost CD player, and pressed 'play'.

After just one listen, I was sold. Broken is a perfectly-judged ball of sex and rage, its distorted chainsaw guitars, bondage sound effects and Reznor's none-more-raw delivery connected with my angry teenage heart. I loved everything about that EP. I still do. The fold-out digipak that spelt out NIN as you opened it flap by flap to make a cross. The sheer perverseness of putting 91 3-second tracks of silence between 'Gave Up' and 'Physical (You're So)'. The fact that 'Wish' will probably be the only song featuring the phrase 'fist fuck' to win a Grammy. If you haven't heard Broken, listen to the YouTube playlist below or go to Spotify NOW and don't come back until you have.

While none of NIN's output prior or since reach the frenetic heights of Broken, it's still the punchy, the industrial guitar tracks that are the ones which grab me on first listen, refuse to let go, and which find their way onto introductory mixtapes made for friends.

I suppose the secret is that, while these songs feature distorted guitars, lyrics that inevitably turn to pigs, to being on your knees, to hands and holes, and Reznor's tattered screams, they all share one thing in common. They all display a natural grasp of what makes a damn good pop song that makes you want to hit the dance floor and mosh like a lunatic.

It's maybe strange, then, that they make up surprisingly little of the band's discography. While The Downward Spiral is often acknowledged as a brutal listen, its all-out thrashers are surprisingly few, with opener 'Mr Self Destruct', 'March of the Pigs' and 'Big Man with a Gun'. Masterwork The Fragile also relies on heavily layered, slow-burn cacophonies rather than straight-up bile, although Marilyn Manson-baiting 'Starfuckers Inc.' displays Reznor's caustic edge to fine form.

In fact, it's in NIN's 21st century output that the guitar-heavy floor fillers really make a comeback. With Teeth, Year Zero and The Slip are often regarded as more inconsistent than Reznor's earlier work, but on a song-by-song basis works like 'The Hand That Feeds', 'The Beginning of the End' and '1,000,000' all stand proud alongside works like 'Wish' or 'Burn'.

Feast, then, on the playlist below, which pulls from all of the albums mentioned above. And hell - if you don't like it, then just listen to Broken over and over again, just like I did on that Christmas back in 1994.