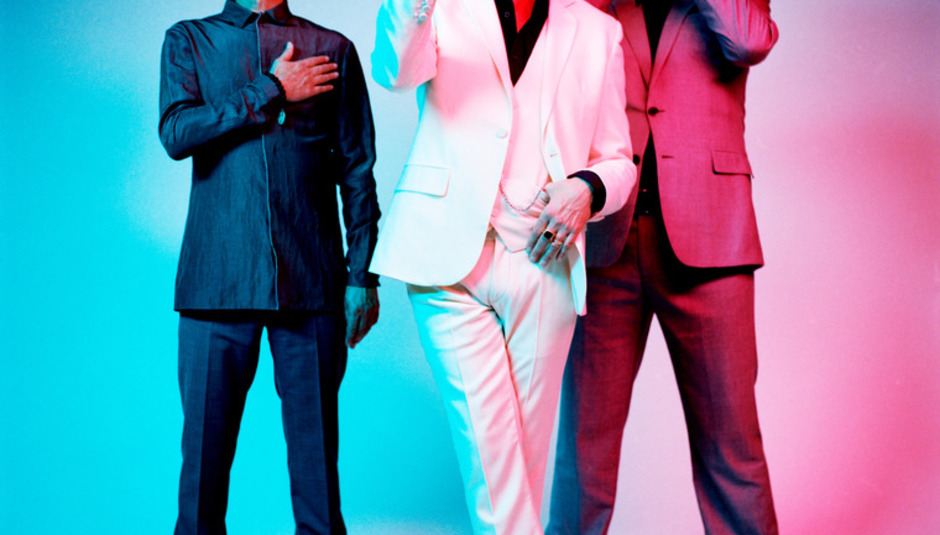 It’s the morning after a kid’s slumber party in 1992. Well, the morning after my 11th birthday party to be exact. There’s fidgeting from last night’s sugar high, hair being French plaited and arguing over whether you’d snog Jordan or Joey from New Kids On The Block. In my brand new white denim shorts that I’ve squeezed my puppy fat into and matching band T, I take a VHS out of its box and push it into the video player. A skinny guy in aviator shades and a leather jacket appears on the screen holding one of those lipstick mics, the camera pans back to his three equally shifty leather clad friends each standing in front of synthesizers, as scantily clad girls dance around them. Screwed up faces, screams of ‘eww’ and the hurried pitter patter of feet towards awaiting parents later and that’s when I realised being a Depeche Mode fan was never going to be the popular choice.

Twenty one years later and attitudes have somewhat changed, well kinda... Depeche Mode have garnered critical adulation as the accepted ‘pioneers of electronic music’, topped magazine polls, won an Ivor Novello, and reached the dizzying heights of being covered by The Saturdays. But there’s still something amiss that never equates to the 100 million records sold, 13 albums, audiences in excess of 30 million, and 33 years in the business and counting with the stature afforded to other bands of similar stats and legacy. Earlier this year the band snubbed a Brit Award after it was made apparent it wouldn’t be televised or given the title ‘Lifetime Achievement'. As Dave Gahan rightly said, “how many other bands have had as many hits as us worldwide and been around for as long? Fuck them then and bollocks to it”.

Tonight the O2 have rightly said ‘bollocks to it’ too as the sanitised upturned moon cup has been turned into an adult Depeche Mode theme park – their name is emblazoned on every free screen outside the venue, ‘Just Can’t Get Enough’ is blaring out of Nandos, and you can even buy a Personal Jesus (cocktail) from the Slug and Lettuce. The second night of their two dates at the O2 of their only UK shows on their first European tour in three years, you can’t help but feel there’s a sense of occasion.

‘Welcome To My World’ aptly opens the set with Dave Gahan centre stage, arms aloft towards his co-conspirators of three decades - Martin Gore to his right and Andrew Fletcher to his left. ‘Angel’, another track from their most recent album Delta Machine quickly follows as Dave calls out to the audience with the same vitriol as he faced the Pasadena Rose Bowl in 1988, ‘Good evening, London!’.

In signature waistcoat, black trouser and Cuban heels, Dave is still the resolute showman commanding the stage and audience with ease and boundless energy. He teases the audience dramatically taking his jacket off to howled screams during ‘Welcome To My World’, arrogantly grabs his crotch on many occasions during ‘World In My Eyes’ and thrusts his mike stand aloft into the crowd during ‘Personal Jesus’. It’s a well-honed showmanship that contradicts his 51 years, putting his more static peers in the business to shame.

Martin Gore (or “our beautiful leader” as Dave affectionately calls him after ‘When The Body Speaks’) still plays the straight man perfectly to Dave’s flamboyant flamenco. Although looking somewhat mentally absent at points, the most touching and intimate moment comes when Martin is alone on the stage taking the vocals for rarity 'But Not Tonight’ during the encore, leading the audience in the a cappella outro. The Gahan and Gore musical partnership is one that has survived and still thrives. As for Fletch, dressed in Daddy Casuals, he occasionally claps.

The set tonight is rightly dominated by Delta Machine interwoven with tracks largely cherry picked from Violator, Songs Of Faith And Devotion and somewhat strangely the less known Playing The Angel as well as some fan favourites and rarities. ‘World In My Eyes’, still with resplendent harmonies, transitions smoothly into the dance dystopia of ‘Should Be Higher’ and the tender lament of ‘Precious’ moves into the floor quaking ‘Behind The Wheel’. Unlike the guy behind screaming “Play Just Can’t Get A fucking nuff”, this is not a greatest hits set - it is called the Delta Machine Tour. However, after three years away there is an undeniable desire to hear the greatest hits, but it’s a thirst that’s only partially quenched.

Always a key part of DM’s arsenal since their first foray with Anton Corbijn in 1986 for a ‘Question Of Time’, large visuals tower over the band given texture to the thread of the songs. Individual shots of desolate looking dogs loom during ‘Precious’, women lie pressed against glass in various yoga poses during ‘Enjoy The Silence’, and the band sit solemnly in a line swapping a top hat for a trilby and then a bowler hat for ‘Goodbye’. It’s the perfect balance of art and sex delivered with a knowing wink that’s been present throughout their career.

Coming back for one encore the audience are firmly in Dave Gahan’s palm as he says, ‘"They're so much better tonight, real fans tonight". ‘Halo’ starts the mass sing-along, followed by a remarkably fresh rendition of ‘Just Can’t Get Enough’ to shouts of ‘yes, my son!’ from the guy behind, before going into the familial twang of ‘I Feel You’. Aptly ‘Never Let Me Down’ brings the set to a close as the crowd and the band erupt into the track’s infectious signature wave, like the blades of windswept corn in the Corbijn directed video, all swaying as one to the same hypnotic beat. As the final soaring chords play out tonight, Depeche Mode receive the acclaim and adoration they so rightfully deserve.

Drowned in Oxford: Past, Present &amp...

In Photos: Frankie &amp; The Heartstr...