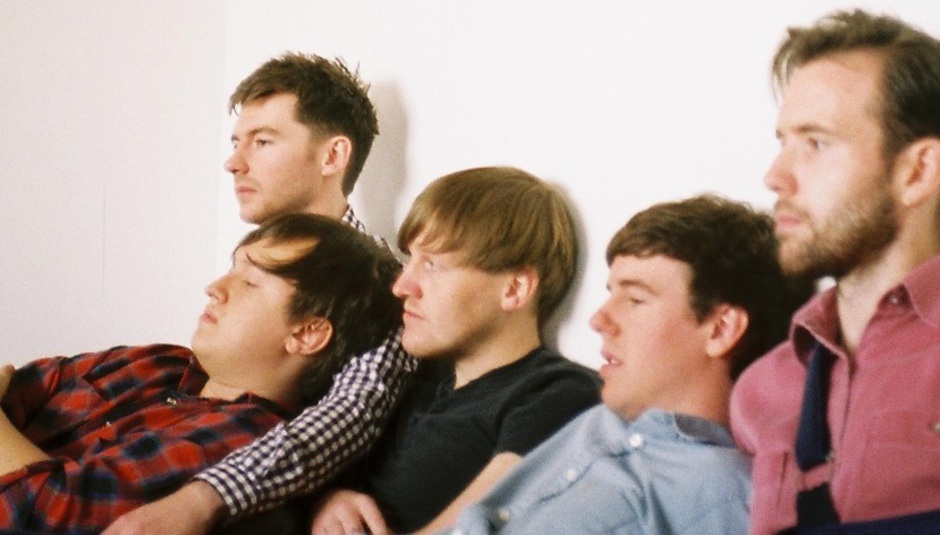 Marple’s Dutch Uncles have a quality to them that’s rarer than you'd think – for a guitar band at least. Like Wild Beasts, Menomena, and only a few others doing the rounds at the moment, you can take one of their songs and listen to it ten, fifty, a hundred times, and unless you’re a musician yourself (and a pretty highly-trained one at that) you still won’t be able to fathom how it works.

Take ‘Fester’, the lead track from Dutch Uncles’ awkwardly sophisticated third album, Out Of Touch In The Wild. If you didn’t hear it previewed on the band’s last UK tour at the back end of 2011, you’ll have heard it a year later clogging up the 6Music playlist. But even if you’ve worked out what time signature(s) the marimba is being played in, you’ve memorised the beats on which the bass guitar prongs, and you can join in with the handclaps at exactly the right points, can you even contemplate sitting down to write song so complicated yet catchy?

Bassist Robin Richards can because that’s what he did. And he’s been doing it for some time: writing orchestral pieces and taking them to his bandmates to be turned into three-minute math-pop masterpieces. This time though, rather than adapting Richards’ music for an indie-rock line-up, for Out Of Touch In The Wild Dutch Uncles have kept the original string arrangements on which the songs are based.

“We thought in our heads, we’re not going to give ourselves that many limitations,” explains drummer Andy Proudfoot. “We’re going to try and see what we can recreate from the piece that’s already been written. It was always going to be hard – we had to call in favours and borrow stuff. We basically tried to give ourselves no limits instrumentally and try and do everything that we had planned to do when Rob had written the piece.”

“We were very excited that it was going to be a studio album and that none of the material was going to be road-tested,” singer and lyricist Duncan Wallis adds. “That was an exciting idea, which is why things may have got out of hand with the strings.”

“Possibly,” Richards laughs. “It ended up that there was more than intended by the end of it. I’m not sure if you listen to the album they intrude.”

Quite the opposite. Compared to Dutch Uncles’ twitchy, technically astute semi-breakthrough album, Cadenza, with its exhilarating riffs that stick out at all angles and polyphonic hooks that come in packs of ten, Out Of Touch In The Wild is a much smoother ride. The album was recorded “in the middle of nowhere”, where “the only distractions really were the television and Star Wars Trivial Pursuit”. The sleek string and synth parts, which in the past would have pulsed from Pete Broadhead and Daniel Spedding’s distorted guitars, account for much of its softness. But so does the confidence that comes with a band that finally sounds at ease with its own intelligence.

Dutch Uncles have existed in one form or another since 2004, completing their current line-up while all were students at Marple College and settling on their name in 2008. They released their self-titled debut album on German label Tapete Records in 2009 and found themselves in the strange position of making a name for themselves in continental Europe before they’d really introduced themselves to the rest of Greater Manchester.

A switch to London’s Memphis Industries label got them back on track in 2010, with the subsequent release of Cadenza vividly demonstrating what Dutch Uncles were capable of: intellectual indie-meets-soulful pop in a way that’s infectiously danceable without dumbing down. Their music is indicative of a group of musicians who showcase an other-worldly genius for music with an everyman appeal.

At its simplest, this is a point summed up in Richards’ admission that “highbrow music and football are my only interests really”. These are men who will discuss Steve Reich and John Cage at length, but over pints of real ale in Manchester’s noisy Northern Quarter rather than over cheese and wine at a dinner party. They talk about playing gigs in the USA, not as some kind of American Dream, but as a time their when manager would tell them: “The booking agents didn’t come along but I’ve got you a free meal at the Mexican restaurant by the hotel.” They cite Kate Bush and Igor Stravinsky as influences, but also admit that, like most people in their 20s, they were just listening to The Strokes and Maxïmo Park a few years ago. For all the obscure musical principles Dutch Uncles’ songs are based on then, they’re not one bit pretentious – ask them about seeing Steve Reich at the Royal Albert Hall, they'll tell you someone farted in their box.

“What we’re trying to do is not to alienate people,” Richards says. “We’re doing it to entertain ourselves and entertain the fans we’ve already got and also trying to take new fans.”

It wouldn’t suit them anyway, even with the precedent Alt-J have set for musical oddballs everywhere. It leaves Dutch Uncles in an unusual position though, because it’s obvious how good they are on a technical level at least. Even if you don’t like their songs, objectively, it’s hard to deny they are difficult songs to play and Dutch Uncles play them well. Surely musicians as talented as these could have commercial success if they wanted it?

“Are you talking about the charts?” Wallis asks. “Well they don’t really exist anymore, do they? The music is nonsense that’s up there a lot of the time. Sorry, I’m not trying to make a rant here but that One Pound Fish guy, whatever the fuck that’s meant to be? What the fuck is that that?

“I can’t remember the last time a rogue number one, or even number five came out that I really liked. The most recent example I can think of – actually I can think of more recent but the one song I always go back to is White Town, ‘Your Woman’, back in like ’96 or whatever [’97, if we’re nit-picking]. It’s this guy at music college that made this amazing pop record which actually everyone liked. Like, universally, everyone liked that song. I can’t see anything of that kind of standard ever touching the top 20 ever again. There’s no hope in it. There isn’t.”

But why can’t Dutch Uncles do what White Town did? There’s a long pause, then Wallis: “Can’t be arsed,” he laughs. “It would probably be the end of our careers,” says Richards, and he’s probably right.

For now then, the band will just have to settle for the critical acclaim that Out Of Touch In The Wild is already garnering – though Wallis is frank about the role of the role of today’s indie rock critics:

“To be honest, a) It’s fishing about golf, and b) When Vice magazine gave us a three word review for our single ‘Fragrant’ and just called it ‘pointless indie music’, I now love their reviews of everyone else’s album. If you can’t take it, don’t laugh at everyone else’s misfortune when it comes to that. It’s just funny. Our last NME review, for Cadenza [which the magazine gave 5/10], yeah we felt like shit the day we read it, but the day after I was like, ‘Is that it?’ We saw the review that girl gave the Clock Opera album. She then gave them an even worse review.”

RR: “She was slagging off their beards.”

DW: “She was slagging off beards! What do beards have to do with any of this shit? It’s ridiculous but it’s funny, it’s entertainment, press is press. It’s the old school way – any press is good press.”

Clearly, it's the fans who Dutch Uncles are most concerned with. When they talk about playing live, they talk about being competitively priced, offering the audience something different to the album, and their willingness to lug an electric marimba around the country so they can do their compositions justice. They’ve even got a surprise cover in the works – “We’re going bolder: think more hula hoops, and I don’t mean the crisps”, is all we can get out of Wallis. So at this stage in the band’s career, do they still worry that no one will show up?

“Oh yeah, every gig,” Proudfoot admits. “It’s from being in bands for years and playing whenever anyone offered you a gig and playing to fuck all people. It never goes away, for me anyway.”

DW: “Since we’ve been in this band our gig-going has changed dramatically. I have huge admiration for people who get to gigs more than once a month. We’re a little bit scared that we’re on tour, Delphic are on tour, Egyptian Hip-Hop are on tour, Everything Everything are all on tour. We’re all on tour at the same time and we just think, God, people are going to have too much Manchester going on. We do feel a bit worried but to be honest more people come than we think every time and I’m full of admiration for people that come out to gigs, especially our gigs.”

AP: “It’s from being in bands and playing the unsigned circuit, and playing to absolutely no one, and you’re playing to a full room now and you can see the people, and these are paying people at this gig. It’s still a novelty.”

Out Of Touch In The Wild is released on Memphis Industries on January 14th.

Dutch Uncles will play the following dates on their forthcoming tour:

In Photos: Photographer's Favourite I...