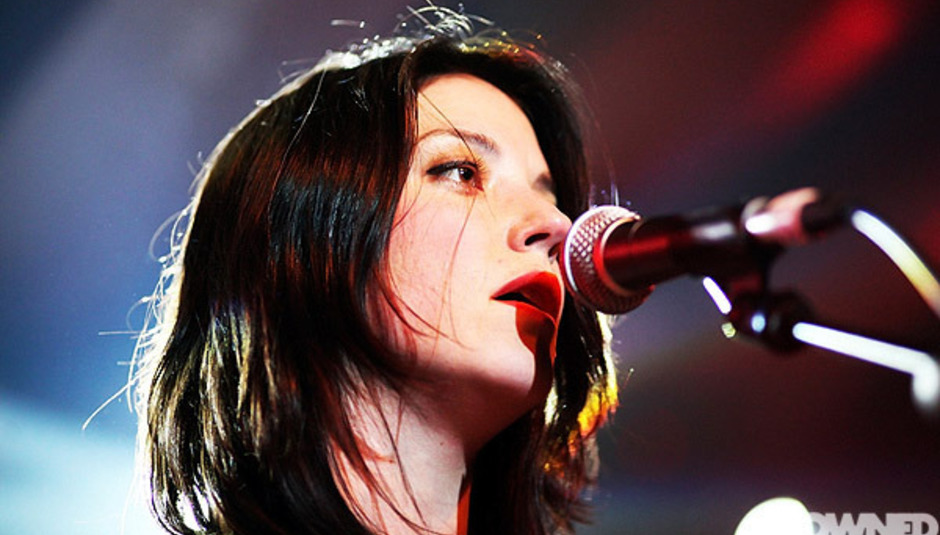 It’s hot. Of course it’s hot, it’s Texas. But it’s also November and according to the folk in the air-conditioned refuge of the Austin Visitors Bureau’s Airstream trailer - everything here happens in Airstream trailers - this heat is unseasonable. A mean sun is burning on the other side of this aluminium wall and if it weren’t for Sharon Van Etten on the Orange stage, I’d happily laze around all afternoon and soak up the southern hospitality and free beer.

Van Etten performs to a backdrop of the Austin skyline, a cluster of generic skyscrapers, the kind of thing that renders every mid-sized American city a toytown metropolis. To the east is the Congress Avenue Bridge, beneath which a million bats sleep. I can't be the only person secretly hoping the Edward Sharpe & the Magnetic Zeros final day headline slot is cancelled due to a bat invasion.

FFF are proponents of the two-stage solution, an ingenious way of eliminating those irksome waits between bands. All four stages - orange (indie), blue (hip-hop, dance), black (loud stuff) and yellow (comedy, variety) - are double-length, meaning tech guys can set up while bands play next door. The fun at Fun Fun Fun never stops, but the sense of spectacle is diluted. How many great festival performances happened on half a stage?

Van Etten blasts through lean, focused versions of ‘Serpents’ and ‘Give Out’ and only slows down for the beautifully sparse, brooding set-closer ‘Love More’. Also on the indie mega-stage this weekend, The Helio Sequence captivate with soaring anthems, Deerhoof stomp out some wonderfully skewed art-pop, and Giant Sand’s gorgeous mariachi-tinged border music is the perfect soundtrack for Sunday’s not-quite-as-blazing mid-afternoon sun. Real Estate’s most recent album is marvellous but they’re not exactly a thrilling live act. In this kind of heat it makes sense to seek shade and put on ‘Days’ when I get home.

In a sweltering comedy tent, Jon Benjamin’s dumb rape jokes leave me cold. Much better is the sweaty, sweary Doug Mellard, who punctuates his rapid-fire jokes with increasingly reckless crowd-diving. David Cross is the biggest draw, but his material is disappointingly predictable. A monologue on the weirdness of colonics is standup-by-numbers, but he still owns the line of the festival - delivered with all the fury of an ordinary 40-something man who doesn’t use Twitter - “I detest your generation!”

It’s certainly a young crowd and tribal affiliations - skater, punk, hipster, nerd etc - seem amplified to near-satirical proportions here. Maybe it’s because Austin is a liberal town in a gung-ho conservative state and there’s a need to rebel a few decibels louder. Near the Black stage a woman asks strangers to staple dollar bills to her skin. Her arms and legs are covered in blood and banknotes, like a zombie stripper. People wear tattoos like walls wear murals; some are magnificent, others less so. I feel particularly bad for a Radiohead fan with the words EVERYTHING IN IT’S RIGHT PLACE down the side of his chest. Everything, that is, except the apostrophe.

During an entertaining Napalm Death gig, skinny kids with bandannas over their mouths bounce off burly biker dudes with beards like ZZ Top (now there’s a true Texan band). There are single-jump moshs to songs that last all of four seconds, and intense sessions of flailing elbows and dust-kicking when the Death play their controversial song-length newer material. By the show’s conclusion, the drummer has puked over the side of the stage and the pit is empty save for a teenage boy wearing a ‘TEXAS FUCKING METAL' T-shirt. I hover into the epicentre of the storm feeling a strange sense of calm. This might be because the band’s Brummie accents sound weirdly reassuring to an Englishman in central Texas.

There are more tuneful moments on the noisy stage. Japandroids must be the hardest-working band around; the Vancouver duo have been on tour for six months and they’re still full of fire - their anthemic punk-pop songs sound enormous. Against Me! don't move me musically but their recent history is inspiring - their female lead singer Laura Jane Grace was until last year a man, Tom Gabel. It's an extraordinary story.

Over on Blue, El Ten Eleven’s melodic post-rock is quite a feat considering they’re only two men playing everything live, but perhaps extra manpower would help them take things to the next level - they never seem to leave second-gear. They’re followed by what’s billed as a 'special performance featuring the Black Lips'. Rumours that At The Drive In are here die when local recluse Terrence Malick is spotted talking to Val Kilmer, who spends much of the next half hour staggering around the stage with a chainsaw, punching members of the Black Lips, shouting “rock ‘n’ roll is dead” and threatening to saw off his own hair. There’s lots of excited tweeting, facebooking and instagramming in the crowd, but ultimately it’s a scripted scene from a movie which will hopefully make sense in context. Although since it’s directed by Terrence Malick, it probably won’t.

When it comes to onstage antics, self-styled 'Japanese Action Comic Punk' band Peelander Z are the real deal. They dress as Power Rangers dressed as Teletubbies and sing about ninjas, tacos and tigers while playing limbo and confirming untrue stereotypes about Japan. They’re Yo Gabba Gabba for drunk people; in other words, the perfect festival band. 24 hours previously on the same stage, Earth were the polar opposite: precise, serene, deadly serious. Their music is so still it’s practically frozen. When a trombone is introduced near the end of the set, it marks such a huge change in tone and mood it feels like an epiphany.

Titus Andronicus are a fantastic live band and songs from new album Local Business sound as strong as anything they’ve written, yet they’re certainly a different animal without Amy Klein on violin. If anything they’re now even more aggressive, more direct, more straightforward rock ‘n’ roll. Speaking of rock ‘n’ roll, Refused deliver another solid hour of evidence that reunions are very occasionally a good idea, even from a band who once vowed to never reform. The songs from their seminal Shape of Punk to Come record sound incredibly fresh almost 15 years later. Elsewhere, Daughn Gibson’s country-fried, sample-heavy crooning is a singular treat, and local outfit Balmorhea’s complex, semi-classical instrumentals are cinematic in scope and ambition.

At night the fest goes all SXSW and drifts into bars and clubs. Two of my favourite shows are at FFF Nites: Ramona Falls, led by Brent Knopf, formerly of Menomena, craft intricate, sophisticated and all-round lovely songs, while Damien Jurado, watched by a disappointingly tiny but devoted crowd, offers a solo set full of sad, near-whispered, perfectly framed songs. The girl next to me starts sobbing when he plays ‘Ohio’ and it’s far from his prettiest tune.

But my favourite act of the festival is my final show. Explosions in the Sky are Austin boys and the audience is appropriately huge for their homecoming. I’m lucky to be able to watch it from the back of the stage, a few yards behind Chris Hrasky’s drums - and from here I witness close-up magic. EITS couldn’t have existed without Mogwai and remind me of the Glasgow band’s early shows: the slow build-up of tension, the dramatic escalation, the cathartic release. The final seconds are magnificent, certainly loud enough to startle the creatures under the bridge.