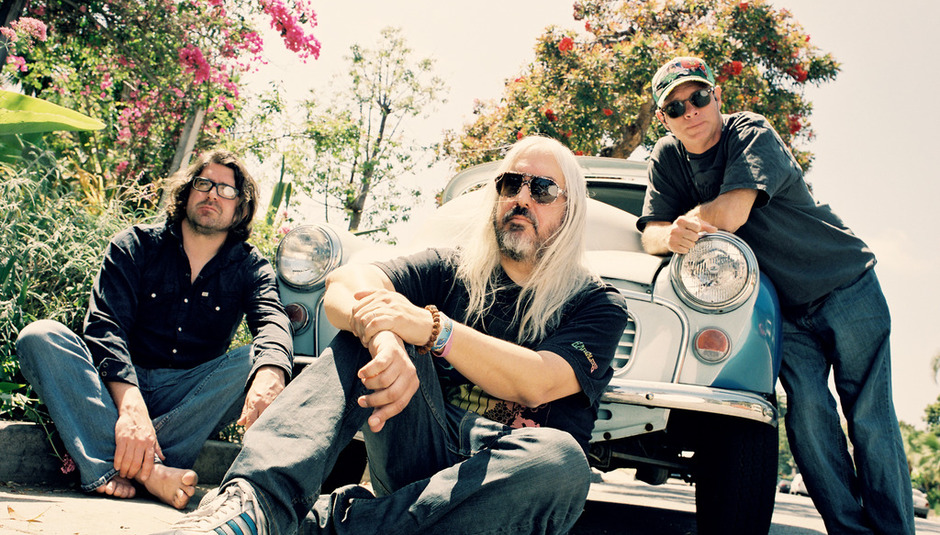 J Mascis darts me a stare as I flutter through the doors of the West London hotel we're to meet in. He's playing with a bottle of Perrier water and as I grin back, I notice a rumbling of nerves in the pit of my stomach – not because he's the man responsible for fuzz rock pioneers Dinosaur Jr. (though I do fanboyishly blurt “I KNOW THE GUITAR SOLO IN 'START CHOPPIN'' BETTER THAN I KNOW SOME OF MY CLOSEST FRIENDS AND FAMILY!” as our conversation begins. Oops.) but because his interviews are notoriously... well, difficult.

Case in point? What initially drew him to the loud abrasive guitars sounds that have become his trademark, wondered Spin reporter Erik Davis in 1989. “It's basically because I don't like to play,” he replied. “The guitar's such a wimpy instrument and it's the only way to make it halfway bearable.” “So you don't like to play guitar?” countered Davis. “No.” “Why do it then?” “I dunno,” Mascis deadpanned. The prickly silences that dominated this encounter with the guitarist and indeed Davis's follow-up interview a few years later (“Interviews are stupid. Most of the time they want to talk about the album. I have nothing to say about it. It's an album, just listen to it”) have been a fixture of his every interview since – as much a Mascis trademark as the screaming guitars and shredded solos that have propped up each of Dinosaur Jr.'s ten studio albums to date.

The trio formed in Massachusetts in 1984 out of the wreckage of hardcore experimentalists Deep Wound, whose distorted textures survived the transition to a more melodic approach in Dinosaur Jr., inspired by acts like The Replacements. They soon became swept up in the grunge upsurge of the late Eighties, their tender-but-fanged sound (described by Mascis as “ear-bleeding country”) earning them a place in the record collections and affections of fans alongside the likes of Sonic Youth, Mudhoney and latterly, Nirvana. By the time Mascis and fellow Deep Wound alumnus Lou Barlow fell out, leading to the latter's departure from Dinosaur Jr. and the group's eventual end in 1997, they had cemented their status as one of the most influential acts of a generation. Their work was done.

Except, it wasn't. I Bet On Sky is the trio's third since reuniting with Barlow in 2005, and in keeping with the preceding two, it's a stormer. With Mascis sat opposite me, still drawing invisible circles in the table top with his Perrier bottle, I ask what keeps them coming back. With their names already written in the history books, what's left to achieve for Dinosaur Jr.? “I don't know,” he eventually replies. He's as laconic as promised, but I find him warmer than the myth lets on, friendly even, and am happily intrigued by the way he so totally contrasts the urgent, combustive nature of his music. “I don't know quite where we're going. I just... like to play shows,” he mutters gently. “And it's like, well, we've played everywhere with one record, better write a new one so we can go play those places again.”

But if having new material to play live was the driving force behind the new album, it certainly didn't stop the band experimenting with layers of sound to create what he describes as their most dense collection of songs yet. “Some records you just try not to worry about that sort of thing and suit about what best suits the song, even if it's impossible to play live.” That explains the keyboards that simmer under the crunchy rush of guitars on tracks like 'Don't Pretend You Didn't Know' and 'Watch The Corners' then – quite a departure for Dinosaur Jr. and indeed Mascis, who even on solo outings (2000's More Light, 2002's Free So Free and, to a lesser extent, 2011's Several Shades Of Why) has mostly favoured guitars cranked to eardrum-splitting volumes.

Most returning heritage acts play a few big-money shows and roll out maybe one last album before running off into the sunset clutching their paycheques, I mention to the guitarist. But not Dinosaur Jr. - was it always the plan to get the band together properly, to be in it for the long haul once more, to dive right into making albums and touring again? “Not really. We just take it day by day,“ he sighs. “Yeah, it just kept going. I've seen a lot of things come and go. A lot of bands come and go. It all depends on whether it's any good or not, I guess.” He brings up his disappointment that Black Sabbath, a favourite of his since his teenage years, couldn't get their recent planned reunion past the legal wrangles and health issues that caused the reformation to falter. “I would have liked to have seen them. But...” He lets a wistful shrug finish off his sentence.

Conversation drifts slowly to the topic of his long term bandmate, Lou Barlow. How are things now? “Alright. Better. Not perfect. “ The words are punctuated by long pauses, pregnant with the uneasiness of a long story better left untold. “We still don't communicate that great, but it's better.” The sort of history they have, I suggest, doesn't come around often – thirty years of collaboration, so many long nights on tour, so many celebrated albums. Does that sort of musical bond take precedence over any personal friction they might have? “Well, you know, we have a certain energy together,” he sighs. “I don't get that same energy playing with other people.”

The pair's origins in the thriving Massachusetts hardcore scene of the early Eighties still has a huge part to play in their collaborations, Mascis confirms – if not musically, then in their attitudes, their ethos. “It's just ingrained in me,” he says. “Growing up listening to hardcore and playing hardcore, that was my most important part of my life, in some ways. That age, you're at your most impressionable, when I was most into music. It was just like, seeing something that was happening then and there that just... that just spoke to me.”

Mascis takes a full minute to answer my parting question, pushing his signature diving goggle-type glasses from the bridge of his nose as he thinks. With the ten album milestone reached, how long can Dinosaur Jr. continue for? “It's, uh, hard to plan for the future.” You say that as though you're wary your relationship with Lou could change at any section, I say. Another long pause. “I'm not worried. You just... never know what's going to happen, right?” But would he like to? “Sure. We do have some history,” the frontman concedes. “In the early days we used to have sound men throwing bottles of beer at us when we were playing for being so loud. It wasn't, like, easy listening music, it was always loud. If you're really loud and have no fans, and we didn't really have fans till after You're Living All Over Me, well, that's a bad combination.”

“I've seen a lot of things come and go.” He wasn't kidding.

I Bet On Sky is released on September 17th on Play It Again Sam.