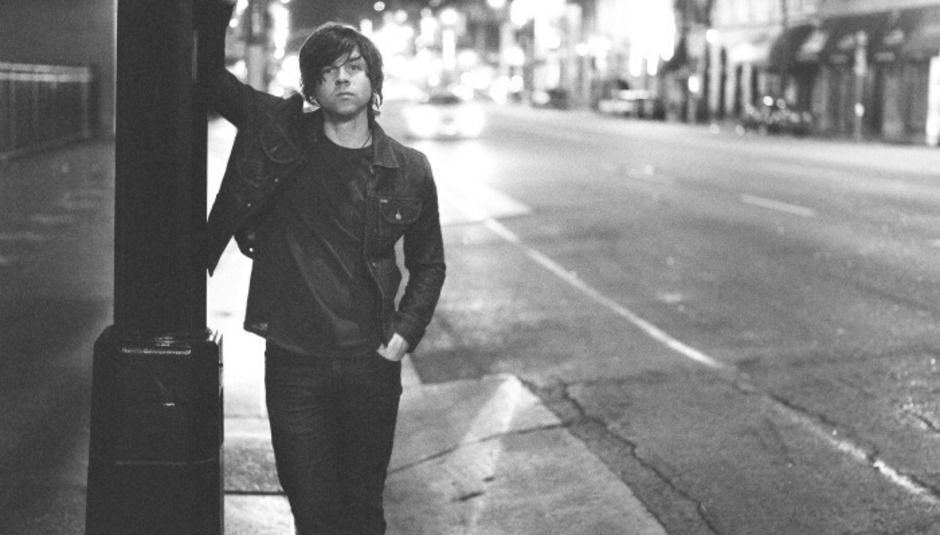 It's sad enough to hear "Do you have an extra ticket?" as you're walking toward your favorite band's show. Hearing it in the middle of a graveyard in the dead of night, as you might imagine, is worse. So it was with a twinge of guilt that I picked up my press pass and walked past the huddle of desperate fans at the Hollywood Forever Cemetery's Masonic Lodge, where Ryan Adams would officially kick off his U.S. tour after a secret gig at West Hollywood theater Largo the night before.

That feeling was replaced by a surge of overwhelming gratitude as soon as Adams took the stage. Adams, misunderstood and erratic as he's been in the last decade, is my favorite working musician; to realize a sellout crowd might feel the same affection was an enormous relief. (There was some precedent for it: at Largo on Sunday night, he drew a standing ovation before he even picked up a guitar.) Armed with only a guitar, a piano and cup of tea, he opened with 'My Sweet Carolina', as if to preemptively silence his post-Heartbreaker naysayers; following it with that album's 'Damn Sam (I Love a Woman That Rains)' was a bonus. On Sunday, Adams spent nearly as much time tuning and fidgeting as he had playing songs, but the first-show jitters and delays seemed to be gone a night later.

Over the course of nearly two and a half hours, he played 26 songs -- not counting an improvised goof about peeing on a boombox -- which allowed him to excavate whole album sides and plumb his deep catalog as well as plow through the new material of this year's Ashes & Fire. He never mentioned the new album, appearing more interested in exploring the old stuff: in all, he played six songs from Heartbreaker and another four from Love Is Hell (five if you count 'Halloween', an upbeat Love is Hell outtake that happens to be my favorite Adams song--and I have a lot of favorite Ryan Adams songs).

But as the new Adams has embraced drug-free, post-matrimony maturity in recent years, his songs have changed, too: trademark rocker 'New York, New York' was re-imagined as a heart-stopping piano ballad, and each of his catalog efforts boasted new melodic twists and turns. In the last decade, the songwriter has quietly become one of the best singers in rock, able to howl or hush with equal aplomb. On Monday, he reached frequently for high falsettos and spent most of the night breathily quivering; for a lesser performer, it would've been a show of astonishing bravery (and frequent embarrassment), but for Adams, it's just what he does.

What he does has frequently under fire from critics and supporters alike, so perhaps the show's best moment came toward the end of the generously long encore, when a handful of audience members called out for 'Two', a Sheryl Crow-assisted ballad from 2007's somewhat-maligned Easy Tiger.

"If you go on an alternative country message board, they're going to say, 'Why'd he close with 'Two'?" Adams joked, scrunching his golden pipes into a nasal nerd's intonation. "'Nobody really likes Easy Tiger anyway.'"

But he played 'Two' as well as anything that had passed through his hands and mouth that night, and for the moment, a decade of controversy seemed as dead and buried as the coffins surrounding the Lodge grounds. Iron Maiden's "Wasted Years," his actual closer, said it even better: Ryan Adams is done wasting time. Make your concert plans accordingly.