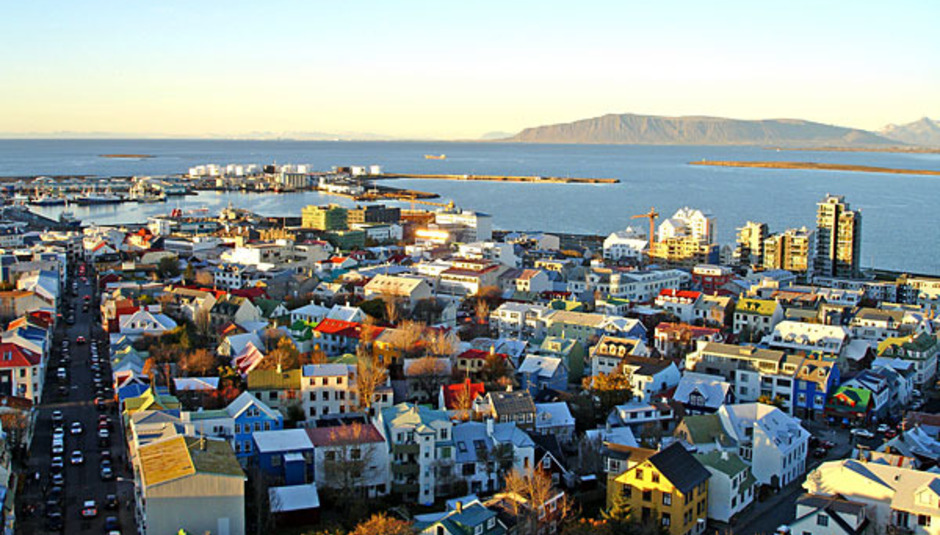 With the 2011 edition of Iceland Airwaves fast approaching (it kicks off next Wednesday, October 12 in the country's capital!) we thought "what better time to have a look at what is being produced and made over there right now than...right now?". So John Rogers takes a look at what's going down in the local environs and picks a few bands he reckons you should hear, 'cos, well, they're worth it. Read on...

The Kex hostel is on Skulagata on the coast of Reykjavík (translation: "smoky bay") was once a biscuit factory, and it still bears many of the building's original hallmarks. A Sweeney Todd-like barbers is housed in a walk-in safe with metal door a foot thick, and there are steel lockers instead of wardrobes, wooden crates used as tables, and careworn original signage everywhere. But now, the Kex building has become a bustling hostel that houses a multi-purpose bar, restaurant and arts venue that's equal parts bric-a-brac installation, cosy study and über-cool warehouse space. Before it was the hostel, it was a pool bar that morphed into an illegal after hours party venue, eventually closed down by city police for becoming too popular. At the inaugural Reykjavík Music Mess it was the festival centre, holding daytime gigs while performers and punters looked on over their hangover coffee.

Kex becomes the hangout on this trip to talk to some of the great and the good of Reykjavík's music scene, made famous worldwide in recent years by breakout acts like Múm, Björk and Sigur Rós. But some inhabitants see this as a curse as much as a blessing. Haukur S Magnusson, guitarist in the band REYKJAVIK! and editor of the local English-language paper Reykjavik Grapevine, is frustrated by the perception of an "Icelandic sound". "Some people started seeing the Icelandic sound not as I would like to classify it, as a liberal, spirited, lively sound that allows for everything, but as just something that sounds like glaciers," he says.

"This troubles me. When I was working with the Iceland Music Export I helped put together a Made In Iceland compilation. I solicited the tracks that had been picked, and sent them off to a PR firm in America, and set up a Google alert for the reviews. And I remember reading them. It was like, 'this is amazing, Valgeir Sigurðsson is crying gold tears from heaven, and Rökkurró are heaven being cried from gold tears', et cetera. But then the reviews would hear Mugison, and be like 'what the fuck? Do we really need blues from Iceland?' Whereas I remember in 2004, one of the best bands I have heard here was a total homegrown mix of Madchester, hip-hop and punk rock. This is the Icelandic sound to me." Inside Kex by Gillian and Nigel Pigott

That kind of post-everything creativity is shot through the Icelandic approach to music making. Anything goes here, and the arrival of a signature sound could could indeed lead to an abandonment of this special creative instinct as new bands scramble to be part of a musical gold rush. But exciting bands like Retro Stefson crush together myriad genres into original afro-metal-party-dance-funk-disco music, and the multi-generation five-piece Apparat Organ Quartet not only feature both students and a grandfather but play high-throttle kraut-synth-chamber-metal - the city's new generation aren't showing too many signs of turning into copyists.

Later we talk to striking singer Halli Valli, frontman of local scene heroes Æla (translation: "puke"). They're one of the best kept secrets in Iceland – a mix of Shellac-style tense post-hardcore, explosive punk and ridiculously catchy indie-rock, sung in Icelandic. Their much-anticipated second album will feature their first English language songs. "We wrote in Icelandic because it's very Icelandic music we make," says Halli. "We never had any plans to take over the world. We just planned to have fun. But our plans have changed," he smiles. "Icelandic bands get a lot of support from the Icelandic Music Export, the Loftbrú travel grants to fly out and do shows, that kind of thing, it's really good."

When asked about his favourite Icelandic bands, he reels off a long list. "I really like the band REYKJAVIK! of course; and Prinspolo, Sudden Weather Change, Kimono, Agent Fresco. And I really like Sin Fang and Seabear, both from the same guy, Sindri." It says something of Reykjavík's size that we later bump into members of half of these bands, including Sindri, in one or the other of the city's two favourite downtown party bars, Bakkus and Kaffibarinn.

At the foot of the town, opposite the hot dog stand with pictures of Metallica and Bill Clinton trying out its famous "pylsur", stands Harpa - a brand new concert hall that's construction ground to halt for several years, plagued by the Icelandic financial collapse. Finally finished, it stands like a gleaming glass and metal mecca for Icelandic music. But many of the people we talk to are unhappy with various aspects of it – some bands have not been allowed to use specific sound equipment and shifted gigs elsewhere last-minute; nobody can sell merch except the in-venue 12 Tónar store, damaging valuable incomes for performers, and local promoters have found negotiations with the venue to be unforgiving. Harpa from the inside by Diamond Geezer

Nevertheless, the spectacular Harpan is finally complete, and will be a part of the 2011 Airwaves festival, throwing its doors open to the music lovers and party goers who descend for the city-wide party from all over the world every October. "It's not a single venue - there are four different venues inside and we are using them all," says Grímur Atlasson, the festival director. "For us Icelanders Harpa is a token of many things - some negative - but for Iceland Airwaves it's just magnificent."

This year is an even more special Airwaves, as the country's most famous daughter Björk will present her Biophilia project in all of its multimedia glory at a series of intimate shows. With all of this talent and invention bubbling away like the hot water under this magical country's lava landscape, Reykjavík remains a wellspring of new music and creativity. For those yet to make the trip, Airwaves 2011 is the perfect opportunity to experience it first hand.

5 Hot Bands From The Land Of Ice:

Apparat Organ Quartet are like no other band. Acquiring a towering cult status from their self-titled debut, their second LP Pólýfóníá sees them stepping up their analogue dance music to a frenetic pace and an epic scope - a favourite of Björk, they're unmissable live.

Gus Gus are from the Icelandic old-school – they have been going for over 15 years in one form or another, be it as a trip-hop collective or as purveyors of upbeat pop on 4AD. They recently reinvented themselves as a soulful minimal techno outfit on Kompakt, and in recent times albums 24/7 and Arabian Horse have moved the goalposts for the genre.

Sin Fang - Because Of The Blood by Iceland Music Export

Kippi Kaninus is the solo project of choir singer and sample wizard Guðmundur Vignir Karlsson, creating lush, organic electronica from sounds as odd as an apple being eaten, recorded from inside the apple. He joined Amina for their second album Puzzle, and his solo project has since found a new form with a five-piece band including two phenomenal drummers, one of whom was in Björk's band The Sugarcubes.

Samaris were one of the standouts at Reykjavík Music Mess festival, and have tongues wagging as a result. They make a brooding, melancholic brew of languid trip-hop, breakbeat and scratching that reminds of Portishead and Lamb. They were one of the winners of the 2011 Kraumur awards for new Icelandic music: previous winners have included Retro Stefson and FM Belfast, so watch this space.