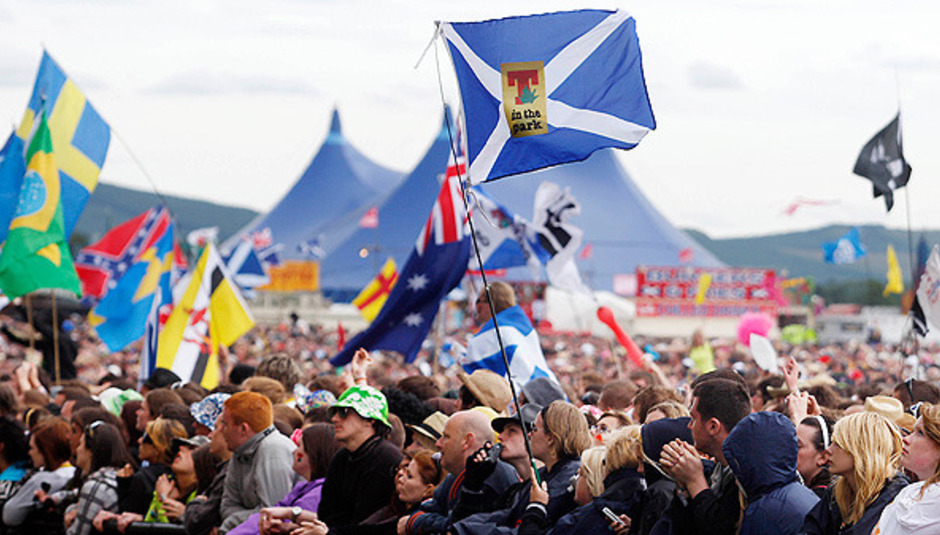 Well, May turned out to be one hell of a month, didn't it? First, Alex Salmond and his independence-hankering cohorts scored a landslide victory down Holyrood way, then the mighty Inverness Caledonian Thistle had a massive say in the most bile-riddled SLP title fight in years and finally, to top it all off, one of our national newspapers dared to scoff in the face of a privacy protecting super-injunction that didn’t do a particularly good job of protecting anyone’s privacy. What next? A giant twice-in-a-lifetime ash cloud covering the entire country and ruining the summer holiday plans of millions? Oh…

To tip our hat to the tumult of May, let’s start this month’s stroll through Scotland’s lush musical pastures on a somewhat controversial note; namely the announcement of the 16 acts selected to play this year’s T Break stage at T in the Park. With the gritty likes of Lady North, the superbly titled The Church of When The Shit Hits The Fan and Conquering Animal Sound mingling alongside the conventionally-attuned Cancel The Astronauts and Boycotts, there’s a more multi-dimensional edge to this year’s quota (although it's possible I'd say that anyway, having been on the selection panel).

Of course, the line-up was never going to please everyone. Reams of recriminations have been sweeping across the Scottish blogosphere, with accusations of foul play, geographical bias and the partiality of the judges all being aired in the usual sour-graped fashion by disappointed bands and their fans who never made the Balado-based grade this year. I’ve had my own say on things here and Edinburgh-based record shop Avalanche have thrown their tuppence in too. It’s safe to say, if there’s one thing we Scots love, it’s a pointless rammy about music on the internet.

Now, back to the things that actually matter, King Tuts Wah Wah Hut has announced it’s playing host to a two week musical extravaganza of Scotland’s best bands. The venue’s appallingly titled Summer Nights soiree will see 70 bands take to the stage from 14 -28 July, showcasing the mercurial musical delights of Found, Meursault, United Fruit, Bronto Skylift and, well, 66 other bastions of tartan-tainted tunesmithery. It works out at about four bands a night for 15 nights, which is a hell of a lot of music. Let’s hope they’ve reinforced the stage.

Those fine fellas at Detour Scotland are slipping on their walking brogues in preparation for a Wee Jaunt around Edinburgh on Saturday 4 June. Rather than taking in all the regular tourist traps, the boys are guiding 50 paying punters around the city’s more unusual haunts and introducing them to a few venerable Auld Reekie songsmiths along the way. For those who miss out on the musical mystery tour (and word is the spaces are already gone) there’s a post-Jaunt show in the Electric Circus with equally dis-orientating locals Found. And if you can’t make either, here’s how last year’s jaunt in Glasgow went down:

Up in Inverness, the line-up for the Belladrum Tartan Heart Festival has been announced. Now, with the likes of Deacon Blue, Texas and Echo & The Bunnymen bloating up the main stage on 5-6 August, this isn’t a festival that’s likely to titillate most DiSers ear canals. But, with Guillemots, Woodenbox and a Fistful of Fivers, Bronto Skylift and Unicorn Kid all confirmed, there’s a fairly tight underbelly to negate the festival’s sagging overhang of washed up has-beens. Plus, Belladrum’s set in the north of Scotland’s promised land where locals (known as tcheuchters) are said to intonate the purest form of Queenie's English (and that’s an actual FACT, apparently). What more could you possibly want?

In sadder news, much underrated Edinburgh act Y’all Is Fantasy Island (YIFI) called it a day a few months back, no doubt tired of being comprehensively ignored beyond the Central Belt for the entirety of their career. Never heard of them? Well, fear not, you can download their exquisite back catalogue in it’s entire glory for free over at Wise Blood Industries’ website. Lauded by some as Edinburgh’s answer to The Twilight Sad, YIFI never managed to hit such peaks, but they did make some cork-popping ditties along the breadth of their five album career. This song, With Handclaps, was my particular favourite:

Voting has now opened for the first ever Scottish Music Industry Awards, which is being held in Glasgow’s Barrowland Ballroom on 4 September. In the name of democracy (or possibly ‘who’s got the most friends’) you can decide who is the most deserving in a mammoth 27 categories until 1 August, where your votes will be counted to decide the winners. Categories include Sound Engineer of the Year, Best Online Publications (cough, cough… vote Radar), Concert Venue of the Year, Event Photographer of the Year (cough, cough… vote Su Anderson) and much, much more. Sure, it does sound a little like self-congratulatory backslapping, but this is the first real attempt at uniting a disparate Scottish Music Industry that I can remember, so let’s give it the benefit of the doubt for now - or at least until we know the winners.

Rounding off this month’s news in suitably gooey style, Calum Gunn of Haribo guzzling noise-merchants Dananananaykroyd has been busy working on a solo project, affectionately titled Slimes. He’s released his first exoplasmic efforts on t’internet, which you can buy here for whatever number of pennies you wish to pay. Instead of the hi-energy throttling of Calum’s hyperactive day job, it’s bonkers, beat-ridden stuff, full of glitchy effects and skittery, ear-infesting rhythms. Not bad for a wee guy from Glasgae.

June is be serving up a surprising slew of high-end giggage to get stuck into. To help you on your way, here's the pick of the bunch...

Eagleowl’s breathy way around a tune often finds them struggling for airspace amidst their more vocal Edinburgh contemporaries. But, once on stage, there are few more captivating or alluring bands in the country.

Usually a show containing Aberdeen indie-merchants Copy Haho would, in itself, be an aural treat , but throw in the hypnotic shivers of Ducktails and Julian Lynch and you’ve got a magnificent gig of the month.

Battles without Tyondai may seem incomprehensible, but a few spins of their worryingly sticky looking new LP Gloss Drop soon underlines their math-noodling mettle. Expect the usual propulsive bursts from John Stanier and co as they look to silence the doubters.

With its regal history and gentile audience, Edinburgh hardly seems the perfect backdrop for a Wu-Tang reunion. But that’s exactly what it is. Just seeing which Clansman bothers to turn up (if anyone) is probably worth the entry fee alone.

United Fruit are something of an oddity on Scotland’s current musical climes. While a predisposition for awkward, electronically-skewered sounds continues to permeate the country’s hipster haunts, the Glasgow quartet’s ...Trail of the Dead-esque apoplectic hardcore should be ill-placed in such pretentious surroundings. Yet somehow their ballistic clatter of ear-grating guitars and behemothic percussion is dragging the band out from the west coast noise scene and onto mainstream playlists and venues. Their riotous, adrenaline fuelled live shows are fast gaining them a heady reputation , while the rambunctious clang of excellent soon-to-be-released debut album Fault Lines will compound the band’s rapidly increasing presence on the Scottish scene. Right now, United Fruit are making a sound that demands to be heard. In fact, it’s so loud, you could say it’s almost unavoidable.

In Photos: The Great Escape Festival ...