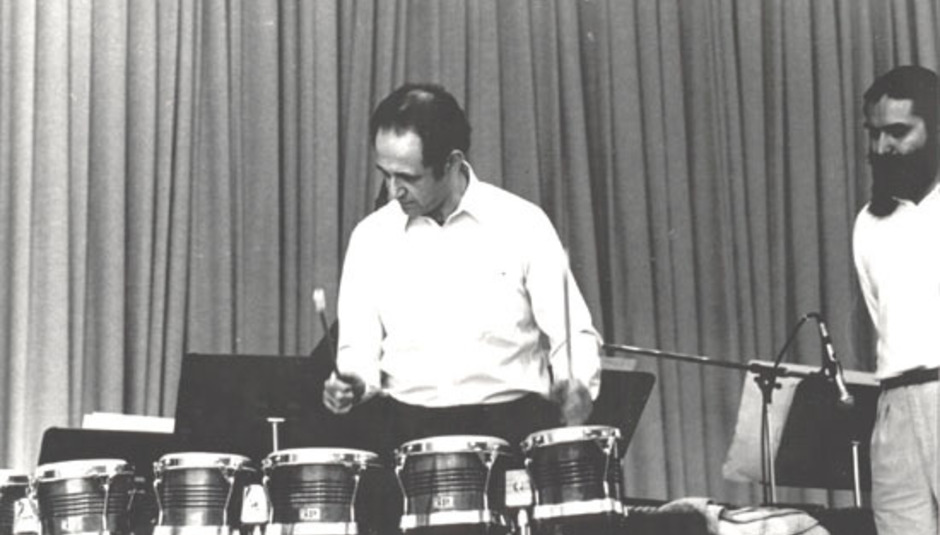 Hauschka, Jóhann Jóhannsson, Clogs, So Percussion... on the influence of Steve Reich

Hauschka, Jóhann Jóhannsson, Clogs, So Percussion... on the influence of Steve Reich

On the 7th and 8th of May, the Barbican celebrates the legendary composer Steve Reich with six unique concerts under the title 'Reverberations: The influence of Steve Reich'. Ahead of the event, we got some of the artists performing to talk about Reich's influence on their work.

Listen below to a special edition of the Barbican's monthly podcast, dedicated to Steve Reich and his influence.

For more info about the line-up of the weekend, please visit www.barbican.org.uk/reverberations

In 2007 I played my first tour in USA and I supported the Icelandic band MUM. On my way from Boston to NYC I made a stop at Wesleyan University where I played at the University church in front of 20 people. But at some point I felt that the concert was not the reason why I was there. A friend of mine who was an assistant of Anthony Braxton invited us for a lecture of Alvin Lucier in front of students and he was talking about Meredith Monk's video works and a John Cage recording that was based on only words that changed just by putting the emphasis on different syllables. Also he played "Different Trains" by Steve Reich and me and my cousin, who travelled with me, felt very attached to this piece, also out of historical reasons.

So I had the impression that the reason to be in Wesleyan was to learn more about the older minimal composers and to get in touch with these wonderful works of Steve Reich.

And then in Chicago at the club Empty Bottle, a quartet played the full "Different Trains" piece as an opener to my concert. I felt a very strong connection to the music and to the style of Steve Reich....the rhythmical string arrangements and the involvement of samples.

It seemed to me that in his music the popular music was not locked away ....somehow it felt like a part of it but it was not at all pop music.....I had always had a strong connection to classical music but for me all the pieces that were written before the second world war were pieces that had no influence on the music that I listened to when I was young, when I danced, when I stage-dived, or when I jumped around......but in Steve Reich's compositions I heard a story , I felt classical music and influences from modern music and it was a relief.

In "Different Trains" especially, the connection between these two trains driving at the same time had something poetic and at the same time extremely sad and touching which is somehow comparable with memories of pain and sadness coming to you while you are watching something beautiful....This could be seen somehow as masochistic but for me it feels like a chance for a new perspective. I like this attitude.

So for me his combination of experimental, tonal and repetitive elements and also the very melancholic undertone are somehow very close to my musical ideals.

Minimalism has contributed to Clogs a sense that it is OK to do simple patterns which repeat, and following from that, the use of repetition with mutation. In Clogs, this mixes with similar elements of interest in rock. However, this is only one of a number of observable stylistic or formal influences from which Clogs draw. We are not purposefully stylistic, except as dictated by the musical idea itself.

I think Steve Reich belongs to a huge bunch of influences that range from African rhythm, Medieval Isorhythm, limited use of modes, polyrhythm, a fascination with repetition and in the case of Clogs, a working of a kind of micro-minimalism into the music. As a 20th Century educated composer, I (Padma) have encountered many of the techniques composers use, systems, processes, and aesthetics. The revolutions in sound, into Modernism and out again, experimental music, tape and electronic music, the renaissance of the lyrical: all these changes are the changes of our forefathers and mothers. Thank you.

The three kinds of Reich music which are seminal to the history of 20th century music for me are the more pure non timbral representations, like "Clapping Music," looping and tape experiments like "Come Out," and the more organically performed and perhaps conceived, "Music for 18 Instruments."

Clogs doesn't really have any avid musical paradigms, we don't have music Gods, we are quite fickle, and mostly are seeking the beauty in a musical idea.

So Percussion on Listening to Steve Reich’s 'Drumming'.

By which I mean not how you should listen, but how you could.

I hope that soon it will not be a novelty to play music that is mostly for percussion instruments. We’re getting to a point where we evaluate content.

The first note of "Drumming" seems like a blatant gesture, but it is the first ambiguity.

Phasing is a machine-age method, but its results are ancient: canon.

All of "Drumming" is melodic and harmonic.

After the first phase has occurred, there are now millions of motivic possibilities. Reich allows them to loop so you have time to hear some of them.

The drummers, singers, whistler, and piccolo player suggest a few musical phrases that exist within that texture. You may also hear some that they do not play.

Any division of 12 can be heard as the correct pulse.

There are no downbeats.
Large-scale organization is by timbre and register, not by inherited forms.

In "Drumming", the human voice should emulate the percussion instruments as closely as possible.

I first heard Steve Reich in my late teens listening to a library copy of Music for 18 Musicians. A bit later I was introduced to his early work, the tape pieces and the phase pieces. I was fascinated by his use of found recordings and the idea of music as process. Works like "Come out" and "Different Trains" were influential on my piece IBM 1401, a User's Manual, for example, both conceptually and in their use of found sound. "Four Organs" partly inspired me to form my own organ quartet, Apparat Organ Quartet, whose original aim - before we started writing our own music - was to play those early minimalist electric organ pieces by Reich, Glass, Terry Reilly etc.

Hauschka's Guide to the Prepared Piano