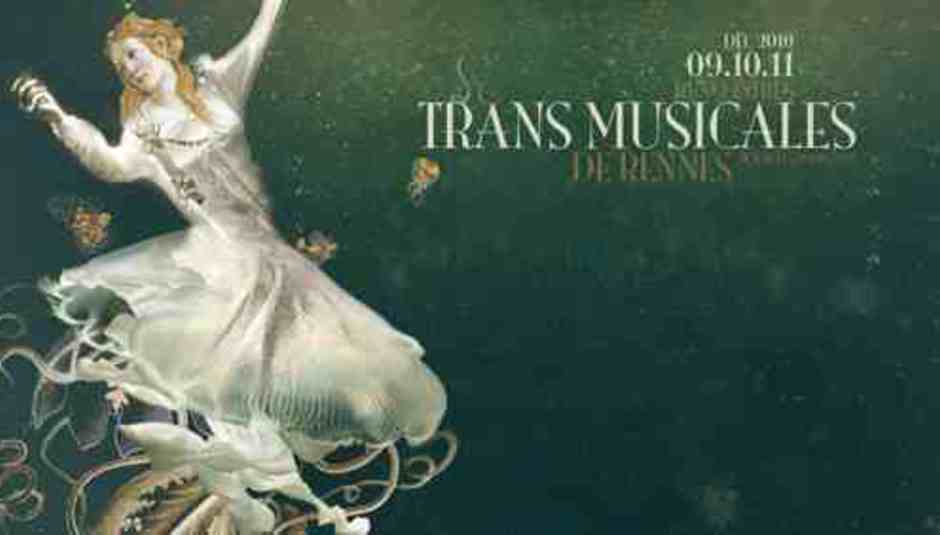 On the 9th, 10th and 11th days of next month I shall be in France at a thing called Trans Musicales. And I don’t know if you can tell what those crazy French have done there, but they have put the word 'musical' together with the word ‘trans’, to create the word ‘transmusical’. And I don't know what that means, but I am pretty sure it is good.

What I do know this means FOR YOU, MAN is that a festival is happening, and loads of ACKFING AMAZING bands are playing. The French call the festival ‘Les Trans’ for short - but I think unless you can do a really good French accent you should take care, because no sexy French bird is going to snog anyone who pronounces ‘les’ as they might pronounce the 'les' in ‘Les Dawson’. Because then you will sound about as sexy as Les Dawson, i.e. not very.

Here is some sort of modern teaser trailer type thing:

In no particular order, I am excited to be seeing, and then reporting on, for the edification of you good, fine people:

GONJASUFI – He has made what is probably my favourite album of the year if you don’t include EPs, and you can’t really because that means including Mr. James Blake, who I am forbidden to talk about until 29th November. Anyway, quite apart from being King Of The Hippies, the act of standing in front of this man as he plays his wailing, faintsome and utterly dense music is going to be something pretty spectacular to not write postcards home about because you are having too many larks. Oh hey, guess-what-no-really-guess-what – YOU - should come to Les Trans! And then we can watch him TOGETHER.

JANELLE MONAE – No doubt you will have had at least one friend be entirely insufferable about Janelle Monae and her crazy old concept album over the course of this year. I have definitely been That Annoying Friend to quite a few people. The thing to remember in irritating situations such as these, is that The People would not be Annoying if The Archandroid was not flipping brilligan, and about as many swoonsome joybits as a thing could be. And she is ‘something else’ live - even if that is the sort of thing a fan of so-called ‘Jools’ would say.

MAGNETIC MAN – Do you know what is better than being one of the people who are absolutely off their tits in the ‘I Need Air’ video [warning, this song is about enjoying dance music but feeling like you can't breathe because you are off your face on drugs-bloody-drugs, ‘I Need Air’ being a reference to that thing that happens when you can’t work out if you are about to die or have the most amazing night of your life somebody pass me the water etc].

Sorry where were we, oh yes hang on;

‘Do you know what is better than being one of the people absolutely off their tits in the ‘I Need Air’ video, which incidentally is here http://www.youtube.com/watch?v=m2vWQFHP3D0 - even though in actual, real life people do not pronounce YouTube links?'

‘Alright I will tell you.’

‘Shut up and let me etc’

In case you were wondering, and even if you were not, there are other very sound and rational reasons for attending Trans Musicales. Again, may I point out for no reason that this is in no particular order:

ITEM ONE: The presence of the following bands and artists who will play their songs with the aim of generally causing delight to happen in your brain:

ITEM TWO: The fact that the music is NOT HAPPENING OUTSIDE but is held in MASSIVE AIRCRAFT HANGARZ - so The Peepul a) do not have to go out in the evening looking like they are a fan of the popular music genre ‘Grebo’ and b) will not get wet or muddy or cold. CIVILISATION, EVERYONE.

ITEM THREE: The fact that there are hactually TWO FESTIVALS, because there is also a [HATEFUL WORD KLAXON] ‘boutique’ mini-festival running simultaneously called ‘Bar En Trans’. And it is called that because - doyouseeetc - it is being held in lots of [ART PROJECT KLAXON AND THEREFORE BEAUTIFUL ARTY PEOPLE KLAXON] tiny wicked bars throughout the town of Rennes.

ITEM FOUR: The fact that a local delicacy in Rennes is a sort of rough-hewn sausage, full of spices and yum and wrapped in a wholemeal crepe (called a ‘galette’). I have not had one of these since I was about eight years old, but even then, when I went on holiday, my Pops and I would always have two, they are That Nice.

ITEM SIX: Beautiful French language or ‘langue’; the availability both to converse and hear it thereof.

ITEM SEVEN: The fact that it MASSIVELY TRUMPS THE PLANS of anyone who is going to ATP for the inexplicably named ‘Bowlie 2’, as in;

ITEM EIGHT: All of the above.

[I don't mean that about Bowlie 2 by the way, I wish I could have gone and it will be lovely, you are going to have a really nice time.]

More details of the festival are here, it has lots of nice info which will get you all excited and hopefully make you do that thing where you basically just sit at your desk and think 'Do you know what, UCKF THIS FOR A LARK' and book tickets. All spontaneous, like. Or at the very least, one could put it on one's Treat List for next year. 'FYI' the Les Trans website is in French, but if you use Google Chrome or whatever that sort of thing - i.e. something being in foreign - will be no barrier to its brilliance or ability to inform you of stuff about about the festival.

So. If having read all that you think buying presents for ungrateful spoileds can indeed go hang and that the run-up to Christmas is too boring and has far too much to do with Dog, and if then, you decide to come, here are some French phrases I believe will be useful:

'Please can you tell me the way to the nearest establishment selling locally sourced sausages with spices in them wrapped in a wholemeal pancake i.e. what I believe You People call a ‘Galette’?'

'I think the King of the Hippies i.e. Gonjasufi has made one of the most mentile albums of the whole year but do you know what, I also find it strangely arousing. Would you like to get off with me while he plays the spelt-wrongly-with-zeds, 'Kowboys & Indianz', sexy and beautiful French person?'

'I don't know about you but I think Serge Gainsbourg might have been one of the greatest men who ever lived. Shall we go back to your place i.e. a nice hotel and not a sodding tent and listen to his entire oeuvre because that will take 'some' 'days'?'

'Oeuvre is a French word, did you know that?'

[By which I mean, not really, because a) you might find me well annoying and also because b) I don't know you, remember, I know this is the internet and we're all mates now but it's not like I have gone totally insane and asked the whole of the internet to hang out with me for a whole weekend in France.]