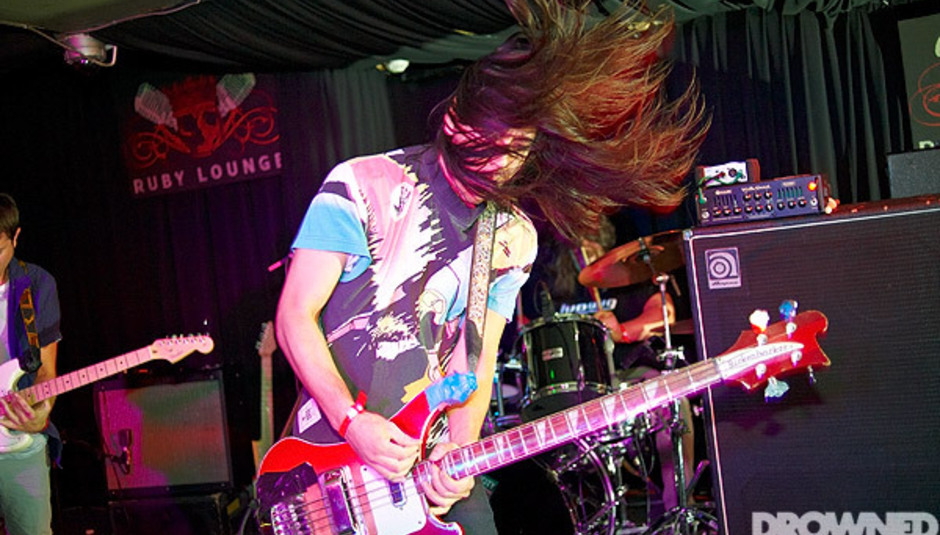 Following Part 1 from Wendy Roby on Friday, here's Dom Gourlay's take on the happenings in Manchester...

Manchester, so much to answer for. As the elder statesman of the UK's independent music scene, it's perhaps only fitting that the annual A&R man's wet dream In The City is held here. While not quite as widely established as South By Southwest and outnumbered by venues and artists by The Great Escape, there's still something quite distinguished about the three-day event that punctuates October's busy live music schedule.

This year, DiS is here en masse, having its own stage for two of the three days while editor Sean Adams sits on one of the panels during the first afternoon. Of course the seminars are a main feature at In The City, and with the main focus revolving around the state of the industry in light of file-sharing, blogs and all things cyber related, by the time Nick Mason's fairly interesting diatribe about Elvis Presley and The X Factor brings the week's talks to a close, we've all heard enough about how the Internet's to blame for everything, thankyouverymuch (most the panels I saw were far more positive than that! - **Ed**).

And yet it all starts in quite a civilised manner. Well, almost. Being the sort of person who can't resist playing "Spot the Nottingham-er" while out of one's backyard, the first person encountered by yours truly is a fellow NG dweller and our conversation almost sees us ejected from the premiere of Creation documentary Upside Down for being "too loud". Drat.

Venturing over to the Night & Day cafe, a venue that stretches what seems like the length of two football pitches, Brontide are conjuring up a barrage of gargantuan riffs that while commendable, just doesn't feel right at such a goddamn early hour. North London quartet Fanzine prove a little more appealing round the corner at the Soup Kitchen, which does sell soup incidentally along with Manchester's own variant on the scotch egg which involves black pudding rather than sausage meat, allegedly. Sounding like a composite mix of all your favourite lo-fi bands from Dinosaur Jr to Pavement and beyond, it comes as no surprise to later learn they're currently under the watchful eyes as the same people that look after Yuck.

Dog Is Dead's set at the Mint Lounge seems to make the right noises, particularly for those with a slight Mystery Jets disposition. Hyped to the hilt 2:54 however leave us slightly underwhelmed, sounding more like a second-rate Curve rather than the next level XX they're portrayed as being. In The City disappointment #1: Timetable clashes. Factory Floor's set at the mysteriously dark Ruby Lounge runs in parallel with many of this evening's most appetising prospects, so we only catch a fraction of their hypnotic performance. Nevertheless, its a mesmerising, and ultimately loud experience that qualifies as possibly THE most essential ten minutes of the first day. In The City disappointment #2: Bands not running to time. Having left the Ruby Lounge with Nikki Colk's errant bassline's still perforating the ear drums, its time to head back to camp DiS (aka Night & Day) where No Age should just be coming on stage round about now. Except they aren't, sound issues causing a twenty minute delay which means we could have watched the whole of Factory Floor's set after all had we known. Damn.

Of course all that is forgotten about when messrs Spunt and Randall launch into a typically energetic, brutal assault on 'Teen Creeps' that announces their arrival, and several stage invasions-cum-crowd surfs and pulverising renditions of the likes of 'You're A Target', 'Chem Trails' and 'Eraser' later, their status as one of the most captivating live bands in the world is reaffirmed.

Having spent much of the daytime holed up in the admittedly plush City Inn (the napkins on the sinks in the bathroom HAVE to be seen to be believed), the pick of the day's seminars undoubtedly being the one entitled A Question Of Sport which compares agents in various sports with their counterparts in the music industry, it comes as quite a relief that the first dose of Thursday evening's live music extravaganza is almost upon us.

Edinburgh trio Come On Gang have spent most of the day outside the City Inn handing out fliers for their set at Dry Bar, and being seemingly amiable sorts, it would be slightly rude not to take them up on the offer. Thirty minutes later, we're grinning like smug Cheshire cats, their Long Blondes meets The Joy Formidable indie (i.e. how it was back in the day when cassettes and hairslides and cardigans were all the rage) going down a treat with those who've made the effort to venture out so early.

Onwards and we're left wondering: when did the Apple Mac become a bonafide musical instrument? A question no one either seems capable of or can be bothered to answer, which is just as well for Becoming Real (or Toby Ridler as his parents christened him) who's cooking up a one-man storm of choppy beats in a dubstep style a la Photek in the spacious Band On The Wall. Word reaches us that Lily Allen is in town, a point proven by our next step at the tiny Moho bar, where paparazzi fight with punters for elbow space. What this means is that Fixers polished, eighties-influenced pop receives one of the biggest crowds of the evening. Musically, they sound like Hurts doing Ultravox, or vice versa, but something about it sounds too clean. Frontiers ubiquitous guitar crescendos more than make up for it, mixing the intensity of Seventeen Seconds era Cure or Manchester's finest The Chameleons with a youthful zest that peaks on the masterful 'Life Full Of Life'. Steve Lamacq looks impressed too.

London duo Walls live up to their billing as a supergroup of sorts, offering a DIY brand of uplifting if minimal techno that reminds us of a bedroom Orbital playing to a make-believe Glastonbury in their back garden. As we leave the venue, we spot Will Young walk in. Apparently he's a fan of Mount Kimbie who are up next. However, more pressing matters await, namely in the shape of four Californian mavericks, aka HEALTH. If Factory Floor already tested the power of the Ruby Lounge soundsystem the night before, HEALTH's primal noise bursts and earthquaking beats take it to another level. We could go into detail about what songs they played but that would detract from the whole point of their performance. By the time colossal thrash 'Death+' marks the centre point of the set, a ferocious moshpit has developed at the front, almost like a throwback to the grunge era when such occurrences were commonplace. We join in, and by the close of 'USA Boys' are dripping with sweat to the point where jackets are removed and shirt buttons undone like a hot summer's day. To cap a fitting finale to a near-perfect evening, I stumble into a curry house boasting itself to be the cheapest in Manchester offering Chicken Madras, rice and a naan for £4.99. Bargain.

One of the facets of an event such as In The City is the almost nonsensically hyped "buzz" bands that will attract industry types like flies. This year's two main talking points have been Kisses, signed to a certain Ms Lily Allen's fledgling label, and D/R/U/G/S, two locally based boffins knocking out low budget techno on an old school Casio keyboards, more of whom later.

For now though, we're preferring the back to basics approach of Leeds guttersnipes Eagulls. They have songs with titles like 'Jackson Bollocks' whose chorus goes something like "You can't think straight, you don't look straight, you're just a copy of everyone else" whilst sounding like a fledgling Idlewild. Ignoring the grunge lite tedium of Tribes, East London four-piece Flats serve up a similar fare that recalls bands like Discharge and Crass in equal measure. Forget their parentage and backgrounds if you will; their set is one of the most exciting fifteen minutes of adrenalin witnessed in a long time, and if nothing else, there'll surely be a plethora of bands forming in their wake in the none too distant future.

Back to the Soup Kitchen, and despite all the build-up, its hard not to feel sorry for D/R/U/G/S trying to create music over a room full of people intent on talking about their plans for the ensuing weekend. Or whatever. It actually takes a full five minutes for most to realise they're on stage, and even when they do, only serves as further reason to continue their pointless conversations. We leave, but in sympathy rather than disappointment as far as the band are concerned. As for those in the audience more intent on having a chinwag, don't bother coming next time.

A sprightly hike up to Band On The Wall finds Spectrals in a much more accomplished vein, almost to the point of being a completely different proposition to the one that first caught our eye this time last year. Playing tonight as a five-piece complete with a recently acquired female bassist, the raw edges of yore well and truly cast aside for a more subtle delivery that may entice radio playlisters to take note if nothing else. Its certainly a more rewarding enterprise then our final venture, which takes us back to the Ruby Lounge, scene of three nights worth of tinnitus and some very pleasant memories. Manchester's Dutch Uncles certainly peddle the right noises; Gary Numan-esque synth squelches compete with Foals orientated fourplay yet it all sounds so...forced. With indifference winning the day, its only left to one feasible option to bring In The City to a resounding climax; the famous curry mile of Rusholme. Where else...?

In The City: The DiS Review