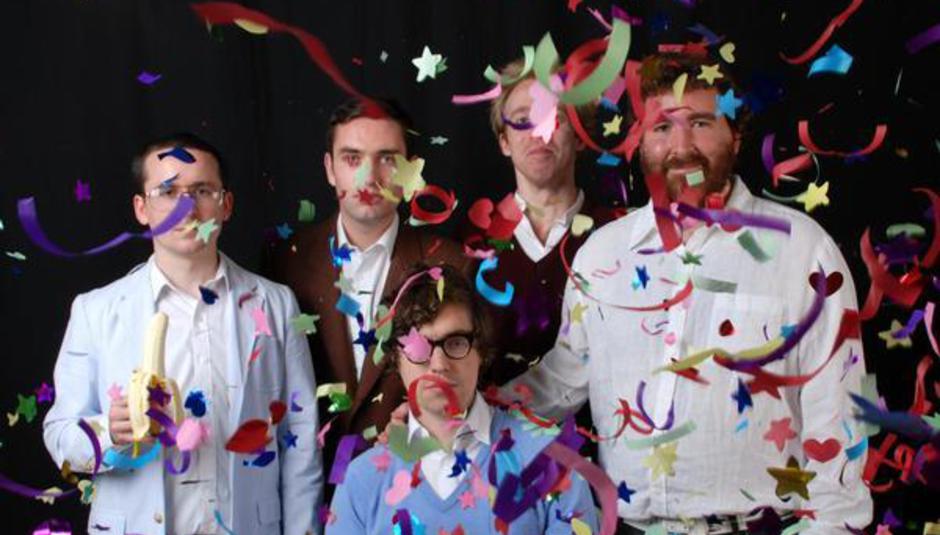 Hot Chip are not daft, in case you were wondering, and even if you are not. I mean, sometimes they get a bit too ‘What, geeks, us?’ for comfort, but I am fairly sure this is the only thing worthy of your irk. The point about them - and do not be letting their deliriously amusing videothing mislead you, everyone - is that they are soppy ishts. They are more sentimental than a Daniel O’Donnell Christmas Halbum Dedicated To Old Spot, His Horse What Died In The Potato Famine (So It Is). And yet somehow, they are simultaneously very calm about their many and various feelings. Listening to them is like having someone stood beneath the window of your bedchamber - and they are chucking pop pebbles up at the glass while the rest of the world dreams away nicely – but you quite fancy them, so you don’t whisper down at them to gan and piss off.

On ‘I Feel Better’, all Hot Chip have done is to take the idea that a night in someone’s arms is a kind of salvation; a way of feeling as if you are Home, even if you are miles away. But being stealthy sorts, they wrap it all up in thoroughly modern British disco noises and actual rainbow synth stabs forged from lovely, so that everyone forgets for all of its 282 seconds exactly what gimpily over-sensitive wets they are. Don’t get me wrong, I am wetter than all five of them put together - Lord could I ever beachoo in a sop contest - which is perhaps why I feel qualified to call out fellow wobbly-lipped romantics when I spy (or hear) them. I will go further, anawl. Because I want us to look back at Hot Chip in 50 years and for them to represent us; for them to be us, then, now. I am so proud of them (all the best bands make you feel this way - as if they were almost your offspring, partly your creation, utterly yours). Also, you can sing 'La Isla Bonita' along to the chorus, it is heggzackly the same melody. Thereby making ‘I Feel Better’ even gooderer than it already is, and it is loads good before you even do that. What’s that you say? There’s a Richard X re-swizzle? Too much, Hot Chip, TOO MUCH.

An actual party record. And I use the word party advisedly, for I am not a partyER and habsolutely never, not ever go partyING. And - like all right-thinking people - am a stickler for this word’s proper use, AS A NOUN. Anyway, I want you to imagine a house party, perhaps it is one you have managed to track down off the tourist trail, on holiday somewhere very hot indeed, and perhaps you have been taken there by your Summer pash. And perhaps a band quite like The Banana Splits are playing, except they are not men in outsize doggy suits, they are human people from Brazil and they are really good looking without even trying and do not look rubbish in searing heat like what we Britishers do. Garotas Suecas are the sort of band who break off, mid-song, to let the handclaps take over and rise up like rioters (this is never not a good idea), and apparently their name means ‘Swedish Girls’ - which is rather what I would expect from the sort of band they are; a bit loose, all predatory happiness, coming Over Here to Steal Our Wimmin. Indeed, I am sure they would have that blonde, sunny delight off your arm before you had a chance to even think about finding the kitchen or a room for to do snogging in. And while you try and hog the stereo to put your dreary mixtape on, Garotas Suecas are going to be stroking your hot holiday girlfriend’s hair and you won’t be able to do a single thing about it. This record is some psychedelic silliness from heaps and heaps of miles away, and it is fun.

Do you know what I love? I will tell you. I love bands that I can forgive for having rubbish lyrics, it is one less thing to worry about. I love being able to look down at the Singles Scorecard (it has sub-headings on it and obscuro categories and everything) - and say to no one in particular [do you know, I am quite lonely] ‘Well, lyrics don’t count in this case, because This Lot are French, so they don’t need to write good or speak proper.’ And of course, The Liminanas are from France, which is why I am letting my eyes skip down to the next heading, which is called ‘Larks, etc?’ Is ‘I’m Dead’ Larks, etc? I think so, but it could be because they spend the whole song calling me ‘honey’ and ‘darling’ and ‘sugar’ like all the best and jangliest Spectorish garage pop tunes. As you might have been able to guess, they are also here to make an analogy between being unloved, and being dead. And because this is not the sort of thing that will bag them a philosophy PHD or get them invited on In Our Time to tawk clever with Melvyn anytime soon, we will concentrate instead on their Pop stripes. And how they are double-sewn, in three rows, on their neat, French pockets.

Efterklang - ‘I Was Playing Drums’ (4AD)

If you habsolutely must call yourself Efterklang, you should prolly expect a few berks to avoid you for precisely that reason. And of course, by berks, I mean myself. See, I gave Efterklang the swerve yonks ago, mainly because their name has the following things in it: a) foreign and b) ‘klang’. I mean, ‘klang’ speaks to me, man. And it says things I don’t particularly want to hear so I am all like ‘TALK TO THE HAND, YO’ while it goes KITUCKCIAKAKAKKAKA; like a dischordant thing that has just been awarded the top prize for alt-noise by the President of the Do I Get More Points For Liking Difficult Music? Society. Anyway. There I were, scouting the internets so you don’t have to, in my usual, fitful way, and I spied Efterklang and thought ‘Ace, Efterklang will make someone on DiS happy, even if it isn’t me, and that is good because I like to keep those crazy cats happy.’ [This is not really true readers, I could not give the figgiest, this column IS ALL ABOUT ME and I make no apologies for same.] So then, because I do utterly only ever include singles I have completely listened to, I goes and listens to the bloody thing. And likes it. Precisely because it doesn’t klang, it has quivering piano chords that hang in the air while the rest of the song dances around them. It has lush strings in plaintive chords that slide around as if they had oil on their feet. And of course, it has drums – appealingly sloppy ones. And it has what sounds like printer noises, except not a full-size printer of the sort you have to kick regularly, but one of those adorable tiny ones you get on calculators when someone has to do some super-huge, cash-money counting on them. ‘I Was Playing Drums’ is divine.

You know what’s so brilliant about ‘Fool’s Day’? It hactually sounds like Blur. And not fuzzy-wuzzy Blur, when they went all alterna-wank and annoying. I mean, PROPER BLUR. Cor, it’s nice. And it mentions ‘the Westway’ and 'Ladbroke Grove' - just like all Blur songs are meant to.

I hope it goes without saying that the reason I have included this is because it is the most disgusting single title you will see this week. And I alert you as it only seems fair that you too see the image of a Victoria Sponge resting on stained porcelain in your head; we all suffer together. YOU SEE IT TOO? Good. You can have that image for free. I mean, I do wonder if Burning Yellow's muddy racket is the best style to be applying to a song presumably about those little round blue things they put in boy’s loos, in a pointless attempt to make them more hygienic and less stinky. What d’yall do in there, boys? Youse is gross.

Despite having a band name like a badly packaged ladynovel*, Good Shoes are good. And ‘The Way My Heart Beats’ is a song with as many bits as a Swiss watch, but I think it is worth perservering through all of them because it is a single that prickles with ideas. AND they can play their instruments upside down. Look at how much fun they are having in their video, and see how appealing and personable their childish grins make them. LIKE IT.

‘So Many Nights’, the title track, the thing, has got some delightfully muffled, house ladyvocals on it and a thunderingly appealing bassline. And it really is the sort of thing I would call ‘fresh’ and ‘funky’ were I writing blurb for one of those flyers for club nights you only ever see at roundabouts. DRSS2MPRSS, ladies.

Silver Columns didn’t want us to know who they were and I am not sure about all this unearned anonymity, if indeed one can earn a thing like anonymity, the idea strikes me as vaguely contradictory. I mean, by all means, be my guest and Keep Things Private if that is what you wish, I am down with that; I, too, permanently hover over the Delete Your Profile button. And I, too, cannot bear all this LOOK AT WHAT YOUR FRIENDS ARE DOING WHAT ARE YOU DOING ARE YOU DOING ANYTHING AND IS IT ANY GOOD IF SO, TELL SOMEONE ABOUT THE THING THAT YOU ARE DOING OH LOOK THAT IS WHAT HE IS DOING WITH HIM AND - GET HER - WHO DOES SHE THINK SHE IS? ARE YOU DOING ENOUGH? IF NOT, WHY NOT? HERE I AM ON HOLIDAY HERE ARE MY CHILDREN HERE IS MY WIFE AND HERE IS MY DOG IT HAS ITS OWN PROFILE AND IT IS DOING MORE WITH ITS LIFE THAN YOU ARE. I mean, I know I can be found on Twitter over-sharing rather more regularly than I suspect my parents would like, but really. Don’t shout about being private, because it is like that cliché whereby you hint loudly about your charitable works but then come over all coy when asked who exactly you give to and how much. ‘Cavalier’ is good by the way, it sounds like wotevtronica but there’s more to it than that and it has stages and layers and they both have delightful accents. 'They’ being Adem and Johnny Lynch. So now you know.

Glitchily pretty electronica. There’s no way of saying ‘glitchily pretty electronica’ without sounding like a grade-A bin-brain, so you know, have a swizz cause it’s dead good and sweeping and atmospheric and all those other things that are annoying to write but good in principle. ‘When The Clouds’ is really an actual man called Francesco, and he wrote me a very charming email. But that is not the (only) reason why I mention him.