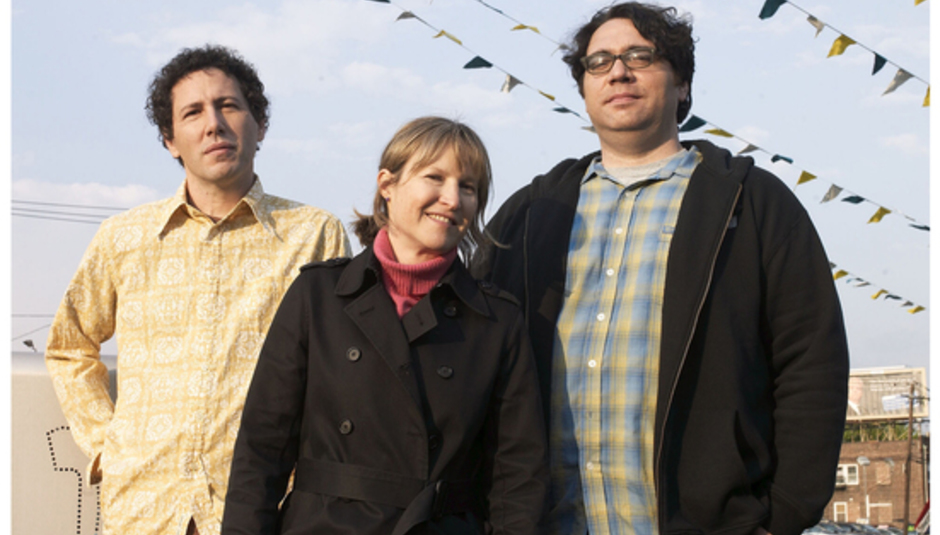 With the tubes notionally back in order again, it’s time for London to be gripped by a rather more enjoyable Meltdown, the Southbank Centre’s annual shindig, this year curated by legendary jazz artist Ornette Coleman. He’ll be turning up at various points to spread a little sax over sets from The Roots, The Yoko Ono Plastic Band, Patti Smith & A Silver Mt Zion and Charlie Haden’s Liberation Music Orchestra, as well as two performances of his own: Reflections Of The Shape Of Jazz To Come and Reflections Of This Is Our Music.

But whaddayaknow? Mr Coleman also apparently enjoys a bit of college rock, having chosen Hoboken, New Jersey’s favourite sons and daughter Yo La Tengo to play for him on Monday. And seeing as how a) on the extremely slim offchance DiS could score an interview with Coleman, we’d only stammer like a petrified schoolchild and have some sort of fainting fit, b) Yo La Tengo are awesome, c) they’ve already brought us one fine album this year, Fuckbook, under the pseudonymous aegis of Condo Fucks, and d) in September we get another in the form of official Yo La Tengo newie Popular Songs, we thought now would be a fine time to catch up with the very charming Ira Kaplan, to quiz him on a busy year and find out if he knows what the hell ‘harmelodics’ are.

DiS: So had you had any prior encounters with Ornette Coleman before being asked to perform at Meltdown?

Ira Kaplan: Just being in the audience.

DiS: He must know your music though, do you have any idea how?

DiS: It’s a bit mad to think of him sitting there kicking back with And Then Nothing Turned Itself Inside Out...

IK: It is! Quite a few years ago now we did a couple of gigs opening for Johnny Cash and somebody told us that Johnny Cash had enjoyed it and had asked for a copy of one of our records. So we knew that right that moment Johnny Cash was sitting down somewhere listening to us. That was weird.

DiS: So presumably you’re a fan of Coleman?

IK: Absolutely. It’s funny, I’ve answered this question a couple of time in press I’ve been doing for Meltdown, but when I first heard his music I can’t say I liked it, I was just so young, I didn’t get it. But I think I was the only one to blame there.

IK: Well I guess listening to The Shape Of Jazz To Come; it was just so immediate, it just wasn’t like any other records, it was just “oh my god”.

DiS: Is that immediacy what Coleman talks about when he’s referring to ‘harmelodics’?

IK: Well I have to say I’ve never been clear whether harmelodics was just the original quartet or if it applies to the records subsequent to that as well.

DiS: Yeah, I tried to read up on what harmelodics actually are. As far as I can tell nobody really seems to know, except that it’s the thing that Ornette Coleman does. Or did. Or something.

IK: No, I have to say I’ve been baffled by all of Ornette’s explanations.

DiS: Yeah... so moving on, your Meltdown set will be no ordinary Yo La Tengo gig, but something called The Freewheelin’ Yo La Tengo. What will that involve, precisely?

DiS: Yeah, you did it in the States a couple of years ago... presumably it worked well?

IK: It worked really well, it was a lot of fun, but in Europe there seems to be a bit of a misunderstanding that the audience is being asked to request songs. Just ask us anything, and we will attempt to respond amusingly. We’re pinning a lot of expectations on the London crowd...

DiS: You kind of want each night to take on its own narrative?

IK: Absolutely. Even the questions that seem kind of innocuous can lead us off in the strangest directions – it’s an exciting prospect for us, because we don’t do shows that are even remotely the same. Even when we get the same question two nights, we just change the answer.

DiS: You think maybe the language barrier was the problem in Europe?

IK: I don’t know, I’m not sure it’s been a huge problem, I think some people have been a little bit inhibited in asking their questions, they don’t have much confidence in their ability to speak, but based on the response people are understanding pretty much everything. Or at least as much as we do ourselves.

DiS: Maybe it's just that outside of Shellac concerts indie crowds aren’t too used to coming up with questions...

IK: Yeah, it could be that. We try not to be quite as withering as Shellac, though... DiS: You’re renowned for being able to remember huge numbers of songs, which I suppose is how you can do these concerts - could you even begin to guess how many songs are in the Yo La Tengo live repertoire at any given time?

IK: Well, I couldn’t begin to guess, mostly because we have a very modest definition of what it means to ‘know something’, like last night a couple of songs we decided to play, we didn’t really know how they go, so we just came up with a vague approximation of the tune and tried to take it from there.

DiS: How much do you actually practise?

DiS: Was the Condo Fucks covers record something you’d been plotting for a while?

IK: No not at all, that was about as spontaneous as a record comes. There was a bar we liked that was closing, the Magnetic Field in Brooklyn, and we decided that we’d play a last gig there, and just because of the band we are we thought we’d play under a different name and leave all that Yo La Tengo stuff at the door, play covers all night. I don’t know how familiar you are with the record, but if you look at the titles of songs there, we appear to be playing a goodbye show, like there are two version of ‘Shut Down’, because the bar is shutting down, we’re saying ‘Gud’bye Jane’ because we’re saying goodbye to the bar, all the songs are in their own way appropriate. And while we were rehearsing them then just as an exercise we thought we should record it, record a practise, and then when we thought of putting it out with all those quotes on it [it comes with spoof endorsements from the likes of Senator Joe Lieberman] and calling it Fuckbook [a reference to 1990’s Fakebook], well the opportunity was too good to pass up.

DiS: Yeah, it’s possibly the most self-referential indie record ever made... [Condo Fucks originally being a joke band dreamt up on the sleeve art of 1997’s I Can Feel The Heart Beating As One]

IK: Well that’s definitely reason enough. But it was not in any way planned, it just happened.

DiS: Did the artwork actually take longer to make than the record?

IK: It definitely did!

DiS: Popular Songs is much quieter and cleaner than Fuckbook, or even the last Yo La Tengo record... would there be any credence to a suggestion that Fuckbook got something out of your system?

DiS: Yeah, okay, I see that... is that breadth something you’re referencing in the title? It says in the press release you thought of Manual For The People as a potential title as well...

IK: Ha ha, no, that was just something invented by our publicist! We were never going to call it Carry On, Oy, either.

DiS: Was it a bit less planned then? I get the impression records like Fakebook and Summer Sun - and obviously the Condo Fucks - are all records that came with gameplans.

IK: Well, Fakebook wasn’t really a band, it was just me and Georgia looking for an excuse to record with Dave Schramm and Al Greller. And Summer Sun, we had no idea what it was going to sound like, we actually recorded a bunch of louder songs, and we put them out later on an EP called Today Is The Day. We recorded a bunch of songs and then pulled back to see what we had. I think after [1995’s] Electr–O-Pura we’ve had a direction of trying not to worry too hard about what the next album is going to sound like. Everything we’ve ever played on we just do whatever seems right at the moment, we just write a bunch of songs, and then go one baby step at the time and just do what seems right.

DiS: Do you still feel a continuity with Yo La Tengo’s earlier works?

IK: I think we can find a lot of elements of that band we were before Electr-O-Pura, but I guess we are a different band. We play a lot of those songs, some of the time, if you follow, and it feels fine.

DiS: Last question – does it get harder to write a song like the new record’s ‘If It’s True’ so far down the line? It just sounds so innocent and unjaded, it makes me feel old.

IK: Oh god, how to answer that question and not seem like an ass... the truth of the matter is that we’re not jaded, we believe when we’re playing together and working together- like when you said that thing about getting the Condo Fucks out of our system, to me the Condo Fucks isn’t something we have to get out, it’s an indication that we’re not jaded about what we do. I don’t want to think about who or what we are or what we do, because whatever we do, it’s true.