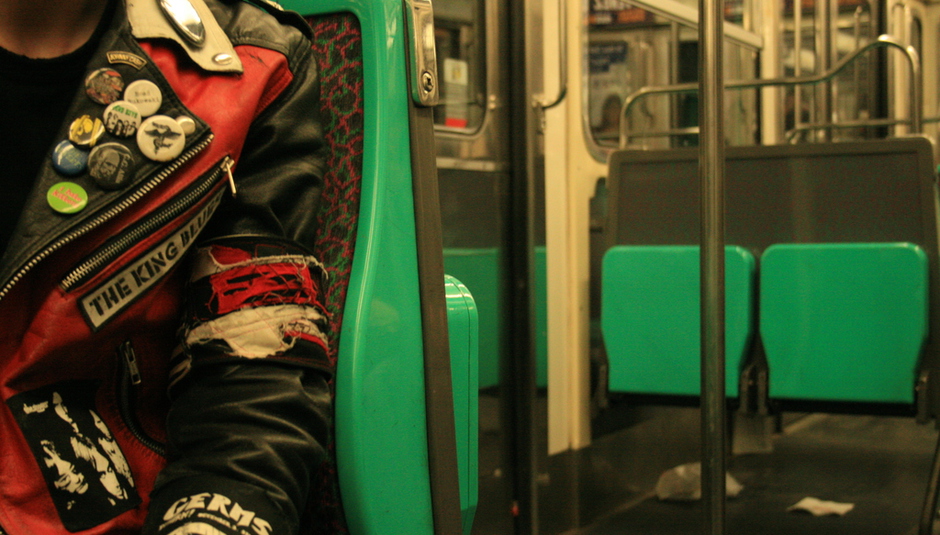 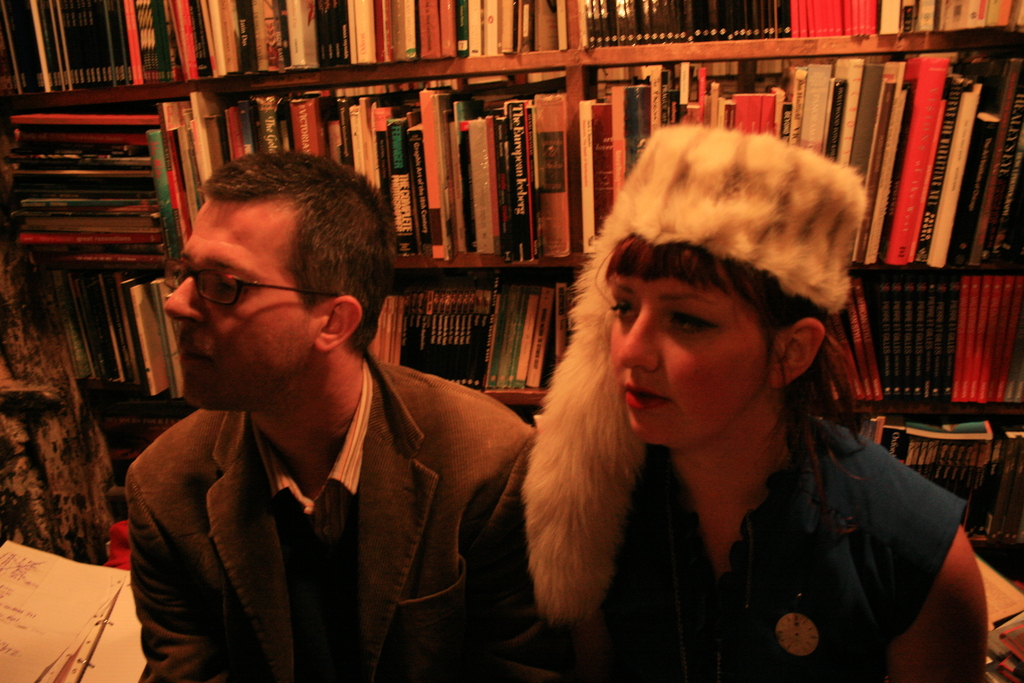 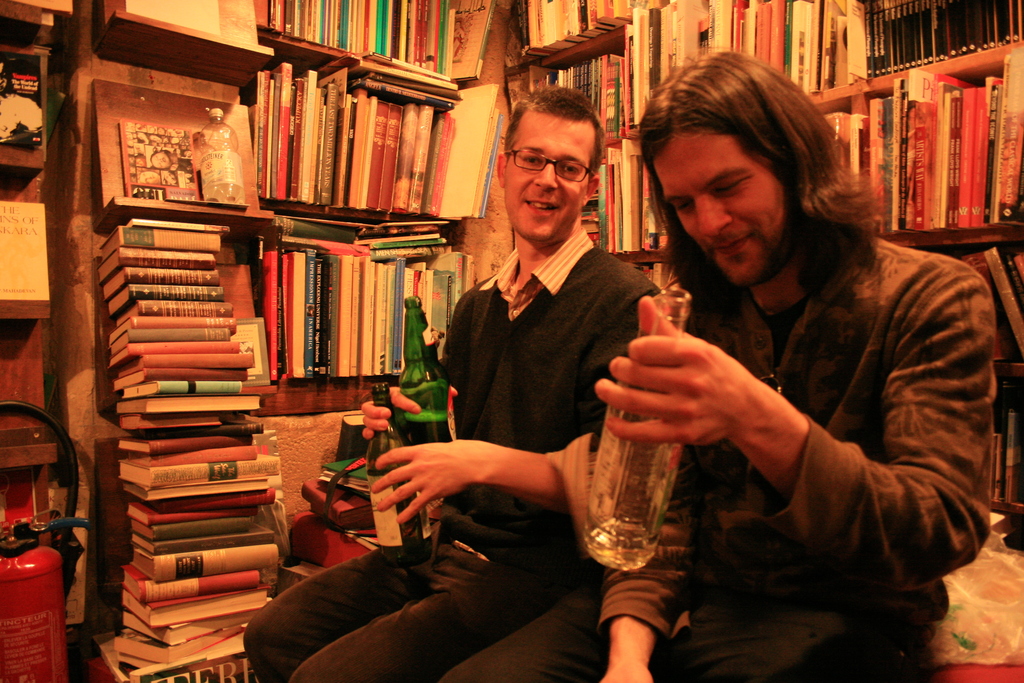 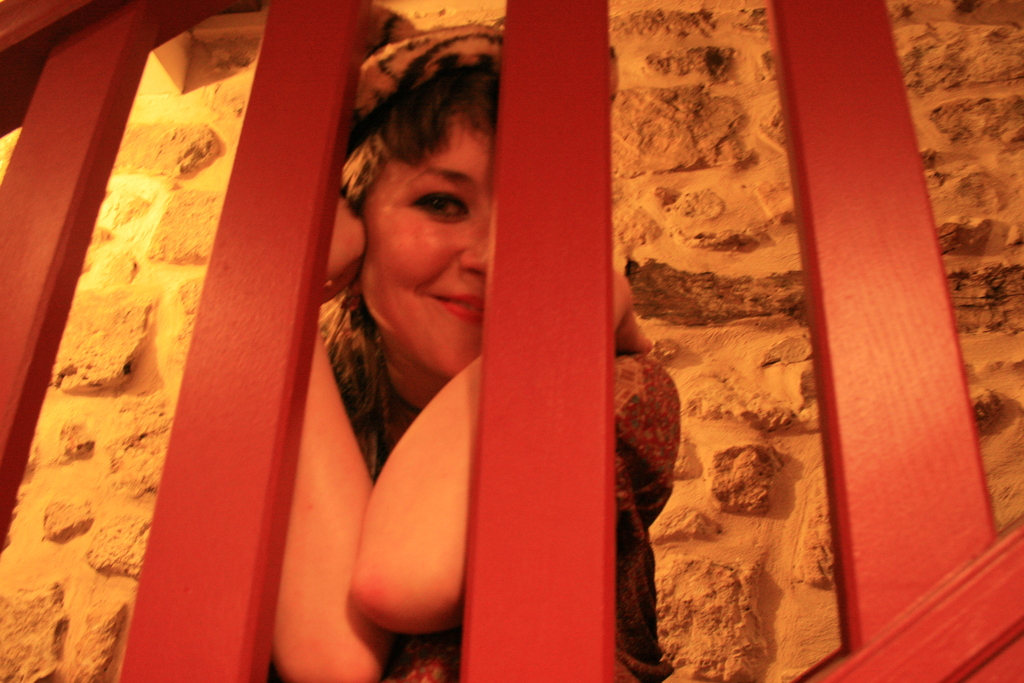 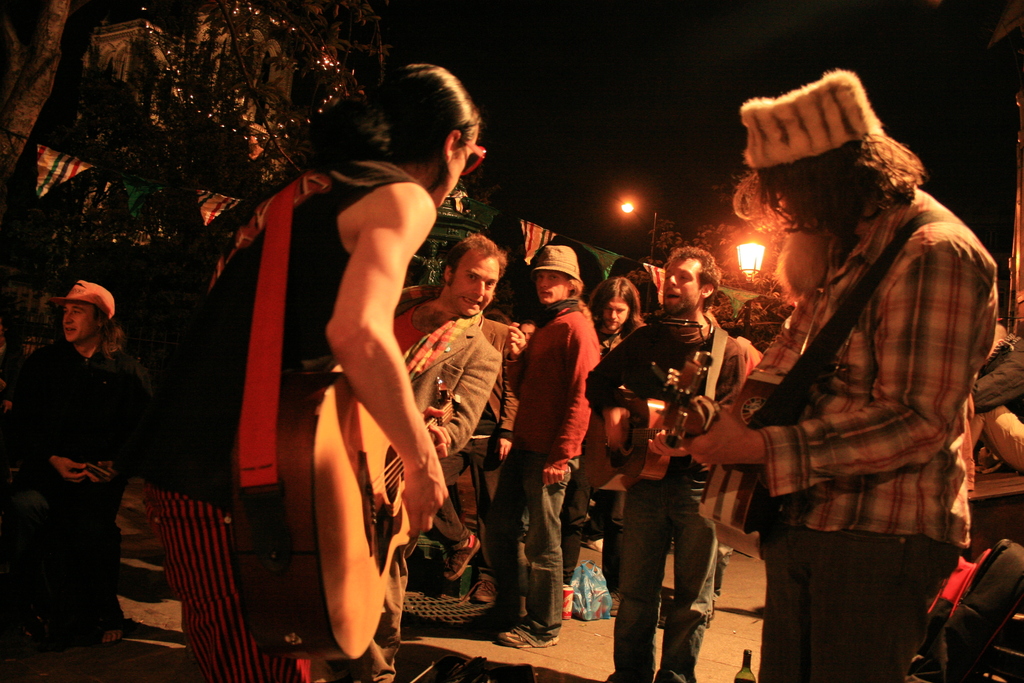 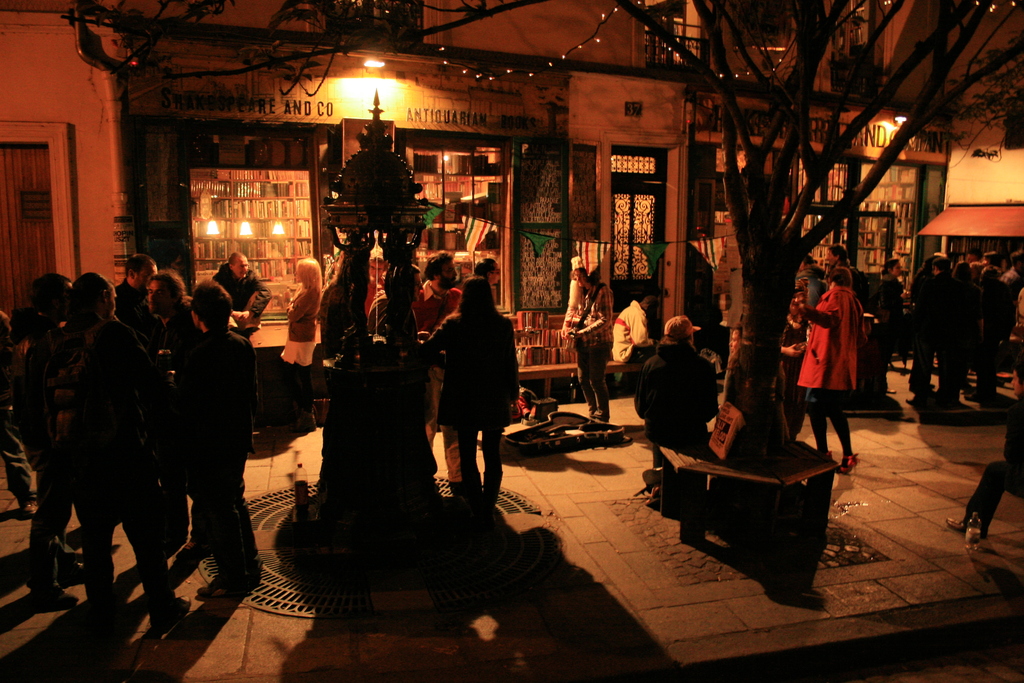 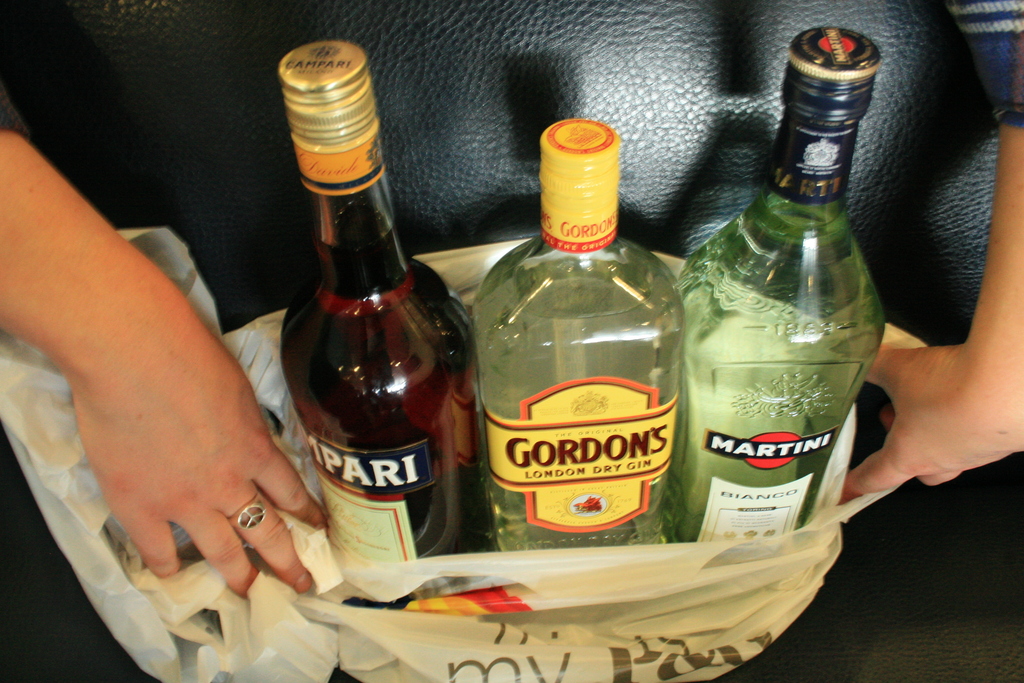 The Golden Hour began as a one-off night of music and literature readings at the Forest Café hosted by Ryan Van Winkle, the current reader in residence for the Scottish Poetry Library, in August 2006. After a rousing success at Edinburgh’s Fringe Festival, though, the entity continued, moved forward and, like anything fed and nurtured in time, has grown significantly. With the help of benefactors such as the Scottish Arts Council and the efforts of a small circle of friends, the web of endeavours spun out of this unifying event include book publishing, and reading and music tours running from the Highlands of Scotland to bustling continental metropolises. We’d already hit Amsterdam and Berlin, and spent a day in Paris, but we’ll pick up with our second night in the City of Love.

Jittery, and clenching chapbooks, literary journals and sheets of A4, four writers huddled in the back room of Shakespeare and Co – the world-famous English-language bookstore on Paris’ Left Bank – all awaiting to deliver their prose or poetry to the ex-pats, travellers and native Parisians packed into the small and unorthodox venue.

So when Jane Flett, published in Johnny America and author of The Cat’s Gravity, and I showed up with two bottles of cidre, four of bier and a jug of vin, it was less about partying than taking the edge off. We cracked the bottles then, and imbibed, but it was up to Reader in Residence of the Scottish Poetry Library Ryan Van Winkle, the Golden Hour’s emcee, to kick things off.

The proprietors of the shop moved us from the normal upstairs reading room to the ground floor, so we faced the outdoors, the Seine, but there was not much to see from that tiny back room, the labyrinthine layout of the old building blocking views to the crowd gathered. Once on stage, though, one could see that an audience not only filled the shop’s ground floor, but the front plaza as well, with attentive eyes and ears extending to Rue Bucherie.

Undaunted, Nick Holdstock gave an inspired take on his story “Teehanu” from last year’s Stolen Stories, an anthology of fiction lifted from real life. Flett, Benjamin Morris, whose work has appeared in the Independent, and Ericka Duffy, author of The Succubus and our resident documentarian, delivered their best in poetry, warmly received by the inviting crowd. And, while I was surprised how many laughs I got out of a divorce story (in a good way, I think), Van Winkle got more, with help from Jonny Berliner’s bluesy bellow, in a rendition of his crowd-pleasing “Toast.”

While the people had to be cleared out for Shakespeare and Co.’s crew to shut down the shop, they once again invited us to play the plaza, so punk upstart Billy Liar, venerable bluegrass player Jed Milroy and Jonny Berliner played the street, receiving support in time from Hailey Beavis’s sweet voice and guitar, and Withered Hand’s Dan Willson and his sing-along melodies.

After a couple hours of playing, and aided by the fall of dusk and a white sheet draped between two blossoming trees, Paper Cinema’s Nic Rawling set to work on King Pest with paper marionettes, deft puppetry and music from Kora, enchanting the crowd and drawing in passersby.

Those watching didn’t dissipate after the performance, however, and our musicians kept on with their session well toward midnight, later picking things up, still with a crowd of around forty, on the bank of the river. The celebration carried on till 3am, when Billy, Jonny and I rented some bicycles – for better or for worse – in an effort to make tracks back to Montreuil.

Unfortunately, our return gig to the UK would be our final with the science-inspired Jonny Berliner, who would need to remain in London to host his monthly Folkadot night.

With no more than two hours’ sleep, and members scattered amongst Paris’ arrondissements, we reconvened by Metro in the 14th, though Hailey and Ericka ran into problems when officials detained them for non-payment. Arguing for a few tense minutes in what French was handy, the ladies sorted it out, as they had just misplaced the used tickets in the early-morning rush to the van, and we left France with fond memories via ferry, en route to Camden town.

At the Camden Head, we’d meet friends from London and Edinburgh, including Faith Nicolson, a talented singer who’d lend her passionate vocals to Withered Hand’s set. Another quick change to our line-up – due to some unfortunate, unforeseen circumstances – would find Hailey Beavis and Jed Milroy teaming with Paper Cinema for a rare, improvised but still inspiring version of their big-screen yarn-spinning. We had, since Berlin, restructured the events into two parts, and in London, each of the musicians returned to the stage for a second set, with Jed closing the night by gathering the remaining singers for a rousing version of the Dylan-penned “Wagon Wheel.”

With our last big-city gig behind us, Billy, Hailey and I went to enjoy one last night of debauchery, mixing in with the fighters and freaks on Camden High street, avoiding fellatious encounters with a strange vagrant, and ending up at a rock ’n’ roll kebab shop till closing time. The few chips in our bellies gave us strength against the unlicensed and confused cabbies, and fifteen quid later we’d crash at Jonny’s vacant flat.

“Bathed in the ludicrous” – Cambridge – Day 8

London afforded us an extended lie-in, which, after the madness of the continent well-described by Hailey’s lyric from “In Any Case,” we were in dire need of. But also, the more sobering reality of the impending end of the tour hovered: We’d endured hardships together – Nick’s passport and bag remained in some derelict’s hands in Amsterdam, as did my bag in Berlin – but we’d also seen some beautiful collaborations and coalesced as a group.

But though the Benjamin Morris-coordinated event at CB2 would be our last together for a long while, we still had high spirits and several of us – Billy, Ryan, Ericka, Jane, Jed, Hailey and myself, along with our snap-happy navigator S. Max Kloeppel – drank in the final day with a barbecue in the unsettlingly monikered Christ’s Pieces park in the city centre.

Several cans of English lager and a few bottles of champagne later, a Cambridge crowd awaited, and we’d give them one last taste of what we had to offer. The college-town crowd seemed a little different juxtaposed with our previous dates, but we stayed true to form with Billy Liar performing a particularly rambunctious set, fueled by exhaustion or maybe a few cans of Tennents Super. Hailey delivered a beautiful set to her nearest to hometown crowd, and particularly delighted our only toddler in attendance of the whole tour by lending the child her cat-ear hat, while Withered Hand and Faith worked out a few more duets for the bill.

But, once again, it’d be Jed who’d bring us on home, splitting a set between guitar and banjo, and when he led another version of “Wagon Wheel”, it wasn’t just the musicians up front: Several writers joined in on the singing, with others dancing, and we all celebrated what was truly a one-of-a-kind experience, ending with the cheers of a Cambridge crowd echoing the inviting audiences we’d encountered from Amsterdam back to Britain. See the Paper Cinema in action:

All photos By Ericka Duffy

In Photos: The Great Escape Festival,...