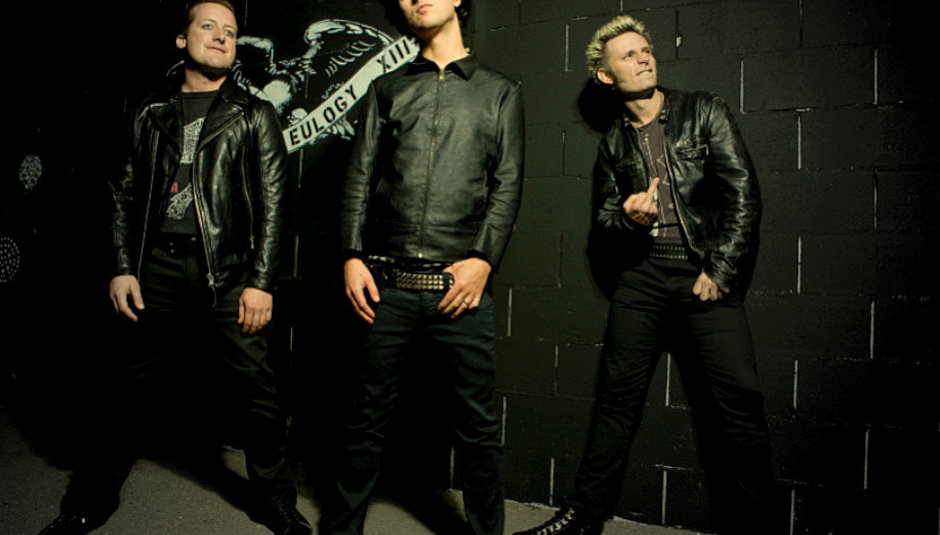 Back in 2004, Green Day rather unexpectedly became the biggest band in the world by writing American Idiot, a rock opera about how their home country was a bit rubbish. Successor 21st Century Breakdown, the band's 8th studio album, arrives May 15th, but DiS can bring you word from deep inside the recesses of Warner Music as to how the three movement, 17-track, allegedly storylined, soon to be inescapable opus sounds.

Song Of The Century/21st Century Breakdown

Begins as a crackly hymnal, a reedy Billy Joe warbling tenderly about ”leading us to the promised land”. Part two’s is ushered in by a U2-ish pulse of keyboards that suggest something awful is about to happen. Doesn’t. ‘21st Century Breakdown’ is a breezy strumalong that sounds not unlike ‘Video Killed The Radio Star’. There’s no excuse for it being six minutes long, but you’re relieved enough that they’re not making An Important Statement to get over it.

It’s okay, a solid stompalong that seemed to have been written purely with the purposes of singlehood. Definitely better pop songs on the record.

A short, piano and cello overture offers the first indication that Green Day have been listening to a LOT of musical theatre, but promptly breaks into the album’s funnest track, slews of lovable fuzz and some tip top harmonies. Something to do with the album’s ‘story’, which follows ‘young couple Christian and Gloria through the mess and promise of the century thus far’. Definitely pays to completely ignore that bit.

“Dreaming, I was only dreaming...” Yeah, this sounds kind of like Andrew Lloyd-Webber. Then they pull exactly the same trick as ‘¡Viva La Gloria!’ and it goes loudish, ending up very redolent of ‘Manic Monday’ by Prince/The Bangles.

More plot to ignore. But the song itself is kinda neat, an almost no wavey rattle of aggro that gives way to a big, clean, “whoa”-tastic chorus.

Phasers are set firmly to Elton John on this unabashedly AOR ballad. Probably worth noting at this point that the average member of the Camel fanclub is more punk rock than 21st Century Breakdown.

The start of act two. Apparently. A big, clean stompalong that will probably be lapped up in concert. Some muttering about ”blasphemy and genocide”, but really it’s all very sturdy and simple.

Last Of The American Girls

Pure bubblegum pop; along with the vast number of showtunes the band seem to have been soaking up, the biggest influence on 21st Century Breakdown is the pop end of new wave. I swear this intentionally apes the tune of a famous hit single, though can’t put my finger on what it may be. It’s fun. I catch my foot wiggling.

More big, crisp pop-rock. Hard to say much more than that. Some blathering about Christian, though not quite sure what he’s up to now.

Sounds like something from Les Mis. Is this what Green Day fans want? They probably think they don’t, but actually do.

More piano-led Elton-isms, though predictably erupts into a massive storm of guitar at the end. Butch Vig has definitely done whatever he was supposed to do, production wise; this record gleams like a newly-sterilised children’s playtoy.

”I’m not fucking around” yell a heavily distorted Billy Joe as (ahem) act three of the album kicks off with this shameless stadium rocker. Shameless because it’s clearly been compressed to fuck, way louder than anything else on the record, despite not really doing anything that different.

More Bangles/Buggles bubblegum. Lyrics about ”Coca-Cola executioner” suggest some darkness here, but really it stands or falls as a good-natured bop-along.

Starts quiet (actually sounds a lot like ‘Heart Of Gold’ by Neil Young). Goes loud. Hard to dislike, but did we really need 17 tracks of this?

Reprise of ‘Song Of The Century’ that meanders along pretty before it – gasp – gets really loud and pogo-worthy. Only a first listen, but no sense of story arc or even real purpose to the three act system.

Oh right. Power chords. Singalong. Just randomise words from the rest of the review and you’ll get an adequate enough description. And, uh, that’s it.

In conclusion... Green Day have not taken the agit-currency afforded by the success of American Idiot and decided to deliver a turgid state of the world address. Which is a huge relief. What they have done is written a relatively unpretentious album of MOR-indebted power-pop (let’s please have nobody say the word that rhymes with ‘bunk’), but realised that ten breezy tracks might seem rather flip. So they’ve made the album really, really long and given it a story. Hey, it’s a free world. But it does go on a bit, and the lack of slowies of any real substance – ala ‘Boulevard Of Broken Dreams’ – is puzzling. Will probably be a big hit, though not as big as its predecessor. Andrew Lloyd-Webber will be flattered.