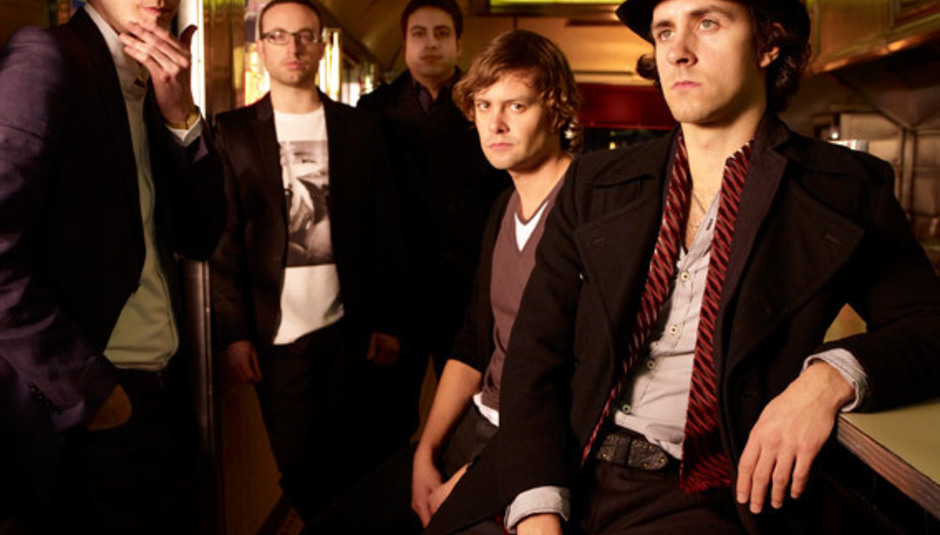 2009 is the year the indie-rock (which is essentially a convenient umbrella term for alternative pop) kids of the Noughties scrawl their names in the rock history book. There are some fantastic records waiting in the wings but Quicken The Heart is one DiS is more than a little bit excited about.

To some Maximo Park may still feel a little like Warp's retort to Domino's Franz Ferdinand. Doubters beware, over the course of their past few albums, Maximo's brand of art-pop has proven to be a leaner, more sophisticated and, a more FUN-filled beast than their Glasgow peers.

The Geordie lads are yet to have the crossover hits of Franz or the Kaisers and they've praps not had the same media trampling as their Class of '04 class mates Bloc Party but all across Europe and in the hipper corners of the States, Maximo Park have found themselves a large, genuine and loyal following. And with good reason, as there's always been something refreshing about them, which perhaps in an age of music for everyone and anyone, they welcome all-comers but still offer something beyond the melodic sheen. It's reassuring that British pop culture still produces brave and honest souls like Maximo, who yes, they may have aspirations of their music enthralling the world but they don't flinch at sonic exploration, lo-fi lyrical meanderings or any kind of political pandering. And its for this reason and many others that DiS has such a soft spot for 'em.

Without furtherado then, here's Paul Smith to talk you through their forthcoming album Quicken The Heart. He reveals quite a few clues to what you can expect when its released on May 11th via Warp Records. 'Wraithlike'
An organised racket. Hence the siren. Memories have a ghostly way of creeping up on us. This song is a commemoration of a moment in time in order to prevent the ghost from fading. Download this track free from MaximoPark.com

'The Penultimate Clinch'
A story of a disintegrating relationship where there was one last spark before the end. Musically, we learned that a bit of simplicity goes a long way (see bassline) on this song. It reminds me of an old British band called The Sound.

'The Kids Are Sick Again'
The first line ("The comforting ache of the summer holiday") indicates that queasy feeling of adolescent isolation that I remember experiencing. The song's ultimate feeling is of escape and I think the music builds to that release after a pulsing, atmospheric beginning.

'A Cloud Of Mystery'
This song has a nimble verse and a powerful chorus, which has been stuck in my head every day since we recorded it. It's about the ritual of going out and maintaining a mysterious aura, even though that's a ridiculous concept.

'Calm'
Fizzing synths and insistent guitars help this brooding number to skip along at a fair pace even though it's one of the saddest songs we've ever written. Sometimes words make no difference to someone who's down, but this is a story about trying to help in some strange, abstract way.

'In Another World (You Would've Found Yourself By Now)'
Ignore the brackets and you've got our longest title. A Belgian fellow lately said we had weird track titles before pulling a funny face. I took it as a back-handed compliment. In the studio, along with our producer Nick [Launay - Talking Heads, Yeah Yeah Yeahs...], we came up with lots of little rhythmic tricks to keep the momentum of the song going underneath the guitar riff. It's about feeling self-righteous even though we all have similar primal impulses.

'Let's Get Clinical'
What was I saying about primal impulses? This song is self-explanatory! It started out on an acoustic guitar when the demo was recorded but in LA it morphed into what I am terming 'robo-funk-pop'. Because I can...

'Roller Disco Dreams'
For a kick-off, I thought this was a funny title. Secondly, it's quite a dark song and I like a good contradiction. Thirdly, the chorus was a tricky bugger, but when something feels right, everything becomes clear, which is what happened in the studio. It's a song about the early period of a romance where you want to put on the brakes and enjoy the moment. The lift in the middle section is one of my favourite moments on the album. 'Tanned'
This is one of our most surprising songs. When Tom came up with the beat I was mystified but very happy. I think it sounds like a Fall song as the verse lurches along, but there's a little breakdown inspired by The Go-Betweens. It's about taking some clothes off (and leaving some on) in a summer romance.

'Questing, Not Coasting'
Unsurprisingly for us, this is an emotional song. The 'action' takes place by a window sill during a thunderstorm. It has, arguably, the most soaring chorus on the record and live audiences have been enjoying the Cars-style breakdown.

'Overland, West Of Suez'
This used to have an acoustic intro like 'Stairway To Heaven', but we scrapped it and just decided to rock out. Check out the spooky 60s garage keyboard freak-out towards the end. It's about seeing someone's sister in the street and wondering where in the world they might be.

'I Haven't Seen Her In Ages'
Archis's bass line is the star of the show here, turning a straightforward pop song into a funky pop song. It contains the phrase "time is over-rated" in reference to the time constrictions people put on their love-life instead of just living for the moment. Phew! That was a mouthful.

For even more about the album visit maximopark.com