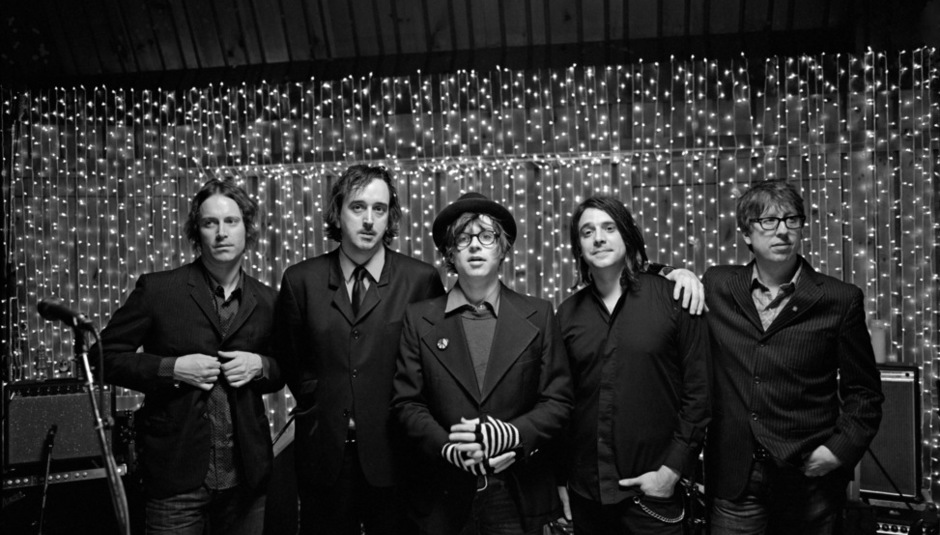 It's fair to say that DiS's recent relationship with Ryan Adams has been just a teensy bit rocky - after years of him ignoring us completely, he last summer got really het up over a mild joke Sean made about his book. Happily or sadly, DiS's good-natured ribbing did nothing to stop Adams quitting his band The Cardinals back in January, focussing instead on his predictably prolific literary adventures and whirlwind marriage to Mandy Moore. It'd be a fool who bet against the man who once released eight albums in a day hanging up his spurs completely, but for now enjoy one of the last interviews he gave in support of 'final' Cardinals record Cardinology, courtesy of South African journalist Natalie Egling. Warning: contains rambling.

"Can I draw a picture of Supergirl in your notebook, unless your questions are in it?" asks a red-eyed, disheveled Ryan Adams as I sit down to interview him and Neil Casal from The Cardinals. Passing him my book and pen, Ryan gets down to drawing, looking diminutive and more like a child scribbling at crèche after nap time than the rebellious and recently rehabilitated musician who’s released seven solo albums, four with The Cardinals.

Out of what mindset does Cardinology come?

Ryan Adams: Some of it was about the repercussions of falling out of love, but moreover what it meant to see it for the first time from a place of kindness, and as an adult, you know. But most of the record is about an unrequited love. A very heavy and beautiful one. But actually there’s a kind of majestic, fire to the record. There isn’t just suffering, and the doldrums of suffering which sometimes can be a repeated, like with Sartre and others. It could just go on and on. But this one, it’s different. I think there’s passion in it. It’s romantic.

To me the album has the feel of sunshine to it; do you interpret it this way?

Neil Casal: [The album is] pretty hopeful, in the end. We wrote a bunch of the stuff in California. [To Ryan:] Did that have anything to do with that?

NC: It’s not like it’s a ‘California record’ I’m not saying that at all.

RA: I was also on antidepressants at the time for my sleeping disorder, but I don’t think that affected it as much as I had finally kinda graduated from this place of not really listening to much music, because I had been concentrating on working on art all the time to really just falling back on and playing music. I mean, I had met this woman that I, um, admired.

RA: [whispers] I’m not really quite sure. Because it’s, I don’t know, because it’s so for fucking real. It’s infinite, I don’t know if it has an ending - this one, might just be one of those things. Regardless, I’m being very open speaking about this, what I mean to say, just as a man and as subject matter the total ability to accept that things will change and can change in life and that lighting can strike and blow your fucking trailer right up and off out of the trailer park, so to speak romantically, like with a flash in the moment. I wasn’t necessarily available to this person at the same time and maybe this person wasn’t available to me at the same time to make these things work but at the same time, this person is a working artist, who I admire so greatly and actually more and more, just in general in a very brief amount of time just became integrated in such a friendly way to the band. Oddly, the thing I felt the record was going to be about, it wasn’t about and it didn’t dawn on me ‘til later, but I left a lot of open ends there. I had that ability to write with alliterations that can change in the moment and can sometimes blossom into new ideas. You know, as with all things, as with all wonderful and strange things that happen in a life, it was the ones that seemed like they needed the least care that were the ones that dawned on me, by accident, I guess the epiphany, that lyrically revealed themselves without much thought

Do you struggle with writer’s block?

RA: No, I just write about it. Sometimes it’s fashionable to ride that cerebral ride of not producing, like Fran Lebowitz. She’s a genius author, an absolute great New Yorker with dark humour and she’s had writer’s block since she wrote her great bulk of work, which is now like an anthology. But you still see her walking the streets of Manhattan, I see her eyes, I see her taking it in and I know inside her mind her internal typewriter is clicking away feverishly. I think it’s when the process becomes internalised and you no longer need to externalise to others what you’re thinking. Sometimes writer’s block can be a step towards mindfulness and almost a perfection of the idea of a passive relationship with your own self. When the artistic voice dies but the creative spirit still exists, then it’s one more step in the state of Nirvana, you’re entering into a state of bliss.

What instrumental state of mind was Cardinology born from?

NC: It was really just the solidifying and coming together of the line-up as the Cardinals is now. Soon after we came together it was like ‘this is it, this is the group now’ and with all the hard touring we did in 2007 we really took this band and this music someplace. It started going way beyond what we had envisioned individually. We just knew and know that we were really onto something special and heavy. We just wanted to capture that, to get it with this record. That’s why it’s called Cardinology. It’s about this group, it’s about really digging into it and really representing it and putting that down on a record. What Ryan brought to us lyrically, we took and introduced the Cardinals sound into it.

RA: Not to be naysaying or contrary, but some of it was written simply so that I had things to play with you guys. I just wanted to hang out with you. They wouldn’t hang out with me if we didn’t have songs.

NC: We just took all that hard work and made a record about what we’re all about.

What are you all about?

NC: It’s a sound, a feeling and an experience. There isn’t a great disparity between what you hear live and what you hear on this record. We were really interested in that continuity.

RA: We can’t capture what we’re doing. I mean, we do out best but we have this inertia that happens when we’re in the same room together and track to track it can change so quickly. It’s so strange for it to be song-writing based music that relies so heavily on improvisation, and I don’t mean musical improvisation and jamming. My inflections vocally will change. If I’m raising the bar, then Neil will raise the bar. If Neil is having a moment where he’s grinding into it then my voice will meet him there. There’s a lot of yin yang trading but then also there’s sometimes dual flight happening. I sometimes think we’re in the trenches, in the front guard. We’re all moving in synchronicity like when you see flocks of birds taking off and you can’t believe how they all move in the same position so when they scatter that’s really something else too. This all had to do with the guitar work and Chris [Feinstein, bass] and Brad [Pemberton, drums]’s ideas. They’ve become a strange rhythmic machine. I really wanted Brad to explore but I only just hinted at it, now he’s banging on tom drums like we’re crawling out of some Blade Runner version of ‘Barter Town’. It’s just madness. I always think that at our best we sound like movie music.

Definitely, I’ve always found that listening to The Cardinals (and Ryan’s solo stuff) is like watching a movie in your mind. What imagery do you invoke in your own mind when singing live, Ryan?

RA: I think of the person’s face, that I specifically wrote the song for, when I sing it. I think of them as if I were staring into their eyes, or I project myself back into the moment that I’m describing and be with the ghost of Christmas past, revisiting. Sometimes it’s less ego-based, which it needs to be. I don’t think I write from a mass standing point a lot of the time, even though the objective point in the song is romantic love but I don’t mind flipping the idea so that I’m not being gender specific, like in 'Dear John'. But I mean, God forbid that men try to understand women. They just need to buy Vogue and read the fucking thing. In my opinion, I think that men are helpless in that kind of wonderful way, I think the best ones evolve without losing id or ego - we need it, we need the fractures. Being hunter or gatherer with a specific idea of not putting a woman on a pedestal so that she can fall and hurt herself but understanding that there should be one in your mind made of crystal and diamonds and unicorns. My lyrics really aren’t hypersexual, they’re hypersensual, They’re always about belonging or needing as opposed to ‘I want you,’ or ‘You must come, I beckon you to my bed’ I’m talking about a need or a missing connection or the disillusion of loneliness through the immortality of the moment. I’m experiencing it as though it’s happening to me too, that’s when I feel that The Cardinal’s vibe is working. When it feels like I’m meditating, when it feels almost like alchemy.

Do you feel less exposed to criticism being in a band as opposed to singing solo?

RA: No. I don’t read rock journalism. I don’t even read the newspaper, I don’t have cable, I don’t watch the news. I read books and I write. I’ve disassociated myself from the modern influx of information that seems so readily available and I think that sometimes news happens faster than the events themselves and that makes me very sceptical of that process. Besides, as long as the guitar’s working who cares?

Touring with Radiohead: the Deerhoof-...