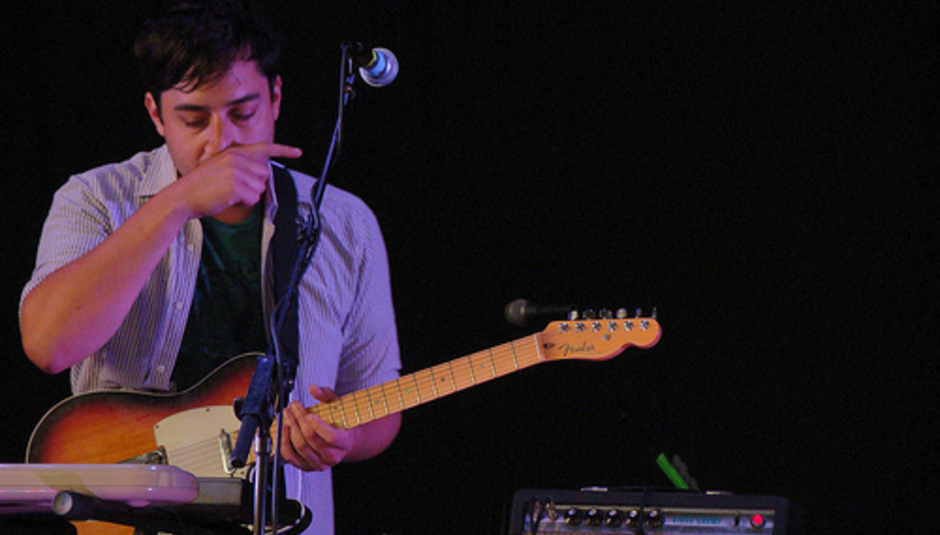 For two weeks back in August 2008, Grizzly Bear's Ed Droste got to live out a dream, and tour his home country America with the band he loves, Radiohead. Here's how it was for him...

I'll be honest, we were scared of touring with such a big band as Radiohead. Thrilled and honoured - but also scared. We were worried we'd never get to sound check and would sound terrible, and that they'd be too busy to even say 'Hi' to us.

But all of this was unwarranted - touring with them was a complete dream. We ate with them often, chatted and always got a lengthy sound check. They treated us like total equals! I was already a rabid fan to begin with, but it's always heartening to know that some of your musical idols are also really nice, down to earth people. It makes you love them even more!

The tour came totally out of the blue, it was an utter shock and surprise. I believe our agent and manager knew we were being considered by the band but we hadn't been confirmed and so they kept it from us until it was official. They just sprung it on us and we all did a little gleeful dance - being asked to open for Radiohead was like a dream come true. The whole experience was sort of like a weird dream. It was so surreal, and I still wonder to myself, did that really happen?

On tour, I found them to be really engaging and friendly and very down to earth. We mostly got to hang out with the Greenwoods, usually post-show and over a small little grill we brought along, on which we'd do a nightly BBQ in the backstage parking lot area. It became a little tradition, albeit a short lived one (as the tour was under two weeks in length). We got to chat and hang with all of them, but we definitely got to know Colin and Jonny the best.

As a band, they were extremely professional. It's like a totally different ballgame; they have a giant crew and amazing lights and everything you could dream of having. It all goes off without a hitch (as far as I could tell), and everyone including the crew just seemed really friendly and happy to be there. I'm not the most technical person so I don't geek out on gear like my bandmates do, but they certainly had a lot of stuff; loads of boxes and trucks and gear. It was impressive. It was almost like a travelling festival or something. That said, they were extremely conscious of their carbon footprint, and everything they used and did was very environmentally aware, right down to the reusable bottles they have everyone on the tour drink from.

Highlights? The personal moments spent chatting over BBQ or beer backstage is what I'll really cherish, but also just getting to see them perform each night was a total treat, as I'd only been able to see them live once before in my life, back when they toured Kid A in New York. So each night, after our show, we'd pack up and rush to the crowd to watch the entire show. It was really cool - because they have such a large back catalogue of tunes, each night was totally different, it felt like I got see all my favourites. It was pretty touching and awesome when on the last night Jonny said on stage (I guess he doesn't talk a lot?) that we were his favourite band in the world. Maybe he was just being nice, but it sure felt good. It always feels good when a headliner expresses that they really enjoy your music and were happy to have you open for them.

As for EMI reissuing their first three records, my view is that labels are dying and are just scrambling for ways to make money. It's not really my place to jump into the fray, but I think it's safe to say we agree with Radiohead's perspective on this one, which they've already clearly expressed publicly.

There's A Riot Going On: Revolutionar...