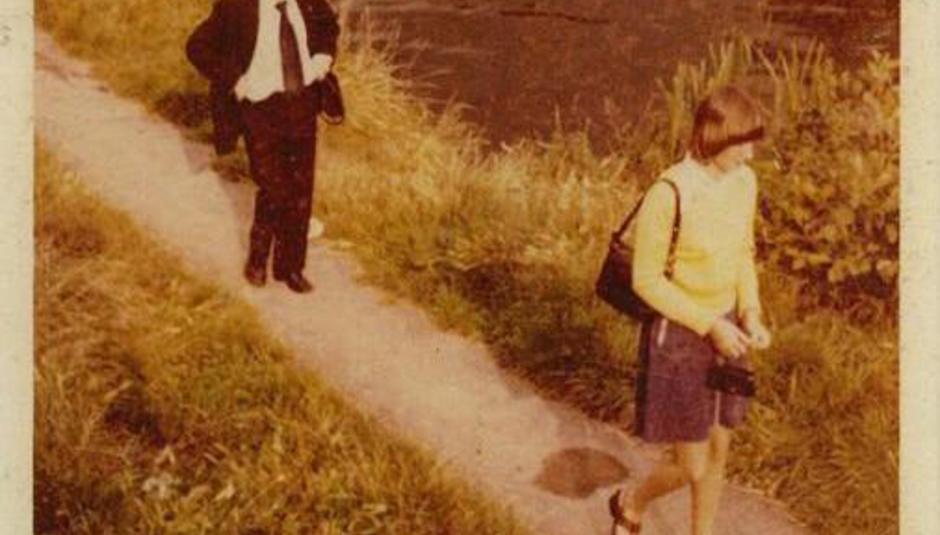 Ahead of the free Rough Trade East instore this evening, Emmy The Great interviewed her support act ExLovers (also on the bill is DiS fave Eugene McGuinness)

We’re currently on tour with a new band called Exlovers, who are about to put a single out on Young and Lost.

Their press release describes them as "boy-girl harmonies, jangly guitars and wistful lyrics, which all combine to create a dreamlike soundscape", and they’ve been on tour pretty much every day since they started in July last year.

I walked all of ten metres to ask Pete, who writes all the songs, and Laurel, who plays the glockenspiel, a few questions. Emmy: Does the fact that you’re doing the interview mean that you’re the core of the band?

L: No, we just change around so there’s not always five people talking.

Pete, how long have you been writing sons?

P: About five or six years.

When did the band come along?

P: Last year, we’ve been together about 8 months. [Fact: this is less time than it takes to make a human child]

So things have moved pretty quickly?

P: I guess we’re quite impatient. When we formed I’d been writing for ages, and we already had loads of songs we could work on.

L: We had a whole set by the end of 2 weeks, and we started gigging a week after that. It wasn’t tight but it was pretty much there.

P: We’ve toured about three months in the last year, played a lot of festivals, so things have moved pretty quickly.

Do you feel like your music is better suited to a live format?

L: Recording seems more fun because we do it less.

P: We’ve been recording with a guy called Jimmy Robinson and a guy called Damien. We’ve just finished recording the second single, and I think we’re going stick with them for the album. They bring a lot to the sound.

L: They kind of understand where we’re coming from but they have a different perspective from what we’re doing. They can hear things, psychedelic things, that we can’t hear.

Do you feel like as a young band you need a guiding hand to lead you through?

P: I’ve done recording before but I’ve never done it to this extent, I’ve never been able to work things out like guitar sounds or anything like that.

L: we’ve all been in band before though. [Drummer Brook was in the Llama Farmers] I’ve always wanted to be in a band.

How you dealing with touring so much of the year, so soon off the bat?

P: I’m nomadic, so I’ve basically been doing this for the last three years. I have different homes everywhere.

L: I find it does get tiring after about three weeks, but it’s fine, it’s good, it’s exciting. It’s what it’s all about.

I’ve read a lot of stuff on the Internet that compares you to Belle and Sebastian, maybe because of the boy girl vocals. Does that annoy you?

L: We like them but I don’t think we sound like them. We get compared to Elliot Smith a lot as well.

P: I can see why, it’s in the melodies I guess. I think he took a lot of influence from the Beatles and I do as well and maybe that’s why.

[Pete mumbles, needs to be asked to move closer to the mic]

Are you an introvert? Do you think that’s why you feel the need to be onstage?

P: Maybe. I’m not really sure. I get really irritable now if we don’t have a gig for a while. I get incredibly restless. Sometimes it’s embarrassing to explain to someone that I want to stand in front of lots of people and sing songs.

Going back to influences, if not those people we mentioned earlier, what are yours?

P: I’m listening to so much Deerhunter right now, both albums. Atlas Sound as well, the Deerhunter offshoot. I think what we’re listening to right now and working with those two guys has brought out changes in our sound.

L: It’s made us realise what we could sound like.

And as a new and unsigned band, how are you funding all this touring and recording?

P: At the moment we haven’t got a label or anything like that so we’re just going through management, it’s quite hard. But we have our own van.

L: Some days it’s more difficult than others, but we stay with family and we sell merch. It’s good to know how to function independently.

P: it brings us closer together to not have any money. We all have to struggle together, and we rely on each other. And if nobody wants to put our album out, we’ll just do it ourselves.

The single 'Photobooth / Weightless' is out 30th March via Young & Lost. For more info visit myspace.com/weareexlovers