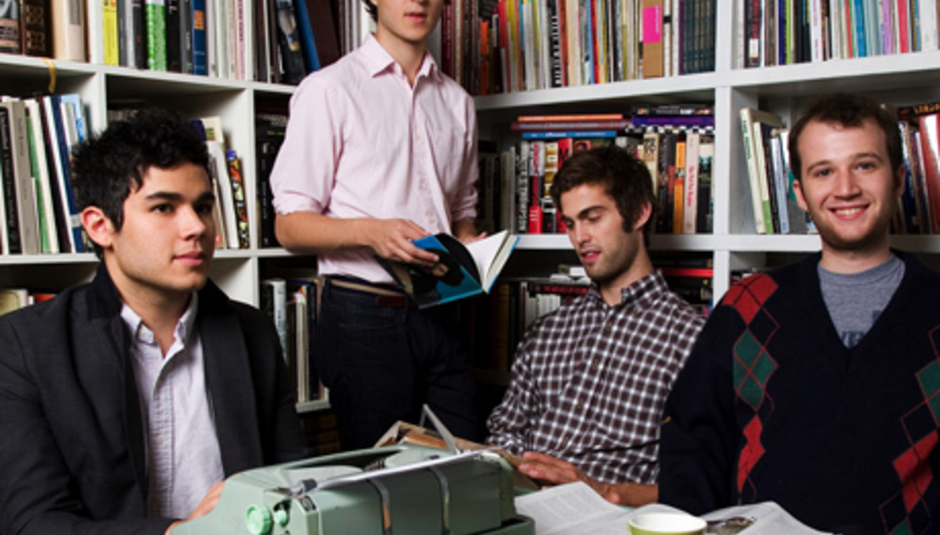 “I think that I would say the only thing we did do that we kinda planned to do was release an album.” Really, Vampire Weekend? Really? You’d have thought from the blanket of airplay, videoplay, touring and critical fawning that Vampire Weekend were aiming for world domination... well, at least the kind of domination such a quirky indie-pop band can achieve.

"I think that was kind of the goal for this record: to get it out so people can hear it. Everything that has happened since then has kinda been a lot of work.”

So says, Chris Tomson, the percussive backbone of Vampire Weekend. We can readily believe them. Playing every festival under the sun to raucous crowds, sold out residencies in London and New York, press, press and more press; 2008 was their year.

“One of the more interesting run of shows we played was when we played New York for the first time since the summer. A lot of our friends hadn’t seen us since January. We’re kind of in this grind where you play shows but when friends who haven’t seen you for a while come to a show and they’re really excited, it means that we take a step back and go: Oh yeah! We haven’t really had time off. We’re just doing what we’re doing, stuff happens outside of us and it’s out of our control.”

“I think that we’re all people who haven’t really got caught up in what people have said about us. We had an idea of what we wanted to do and we’ve done it.”

Which, funnily enough, is what they’re planning to do this year. With a weight on their shoulders which they haven’t fully appreciated yet, Chris seems nonchalant about their plans, while still sounding fired up, or as much as he can sound on a dodgy mobile connection across the Atlantic.

“It’s not necessarily an explicit plan but we’re gonna have a couple of weeks off and then in January head into the studio for rehearsing, writing and recording. We’ve had these songs for so long now that we’re all very excited to get in there and work on new stuff, kinda like when we first started. We have a couple of new songs that we play in the set that we’ve been playing for a couple of months now but other than that there’s a lot of energy that’s expended driving vans and that sort of stuff, so we haven’t really been writing too much.”

So, it seems pertinent to ask: what's the ideal environment needed for Vampire Weekend to conjure up a similar magic to what has come before?

“Just being home and being in a room together is ideal. A lot of the songs were written while at school or while at jobs, then going to friends’ houses and recording so we’ve never been in a position where the band was a full-time job and we were sitting writing.”

At this early stage, it’s hard to get answers from Chris about direction, sound, even how ambitious the band are gonna be. All he’s doing is speculating, but it sounds tainted with realism and still devoid of public expectation.

“I think it’ll be the same basic idea which is to have these songs that we try to arrange in a way that sounds interesting to us, whatever that means. I think we all have ideas we want to bring in.”

A democratic, diplomatic and collaborative effort seems assured – can you really see these four young men at loggerheads at each other over their music? – but whether that means more of the same or something far more exciting remains to be seen. As it stands, Vampire Weekend are merely a snapshot of an unexpected Zeitgeist; as exotic influences pepper middle-class indie rock, this band seem at odds with the general public's perception of them. They really don’t know how much they’ve achieved and perhaps we should leave it that way until their second album is done. Wouldn’t want those pressures pulling them apart just yet.

Before parting from our ragged, cross-continent communication, we asked Chris what makes Vampire Weekend tick.

The Dirty Projectors and The Walkmen

"Two bands that I can think of, one we know quite well and one we’ve played a couple of shows with. Both of them are really, really awesome and we were really honoured to play with them. One is the Dirty Projectors and the other being The Walkmen. Those are two bands that are on in the car when we’re all together and there are no arguments. They have great songs and the times we’ve played with them they’ve all played great shows and they’re all nice dudes and ladies. They’re bands that are doing really awesome music."

"We just got 808s and Heartbreaks. We like what he’s doing. I think all of his music is really quite good. It’s poppy and danceable but still innovative. He’s someone that’s very much an inspiration."

"It’s a spoof of films like the Johnny Cash movie or Ray Charles movie. It’s probably more of an American thing, but it’s something we watched that we really enjoyed. It has lots of funny musical references."

"Without hesitation. Since we’re usually on the road, it’s hard to get a high class Mexican meal but burritos are always a good way to go. There’s two towns if any of your Drowned in Sound readers ever come over to the States. I would have to say I’ve tried Mexican food in the UK and it was not very good, no offence! If you’re ever in Fort Worth In Texas and Rawlins, Wyoming, there are great Mexican places. They’re really out of the way though. They’re in the middle of nowhere."