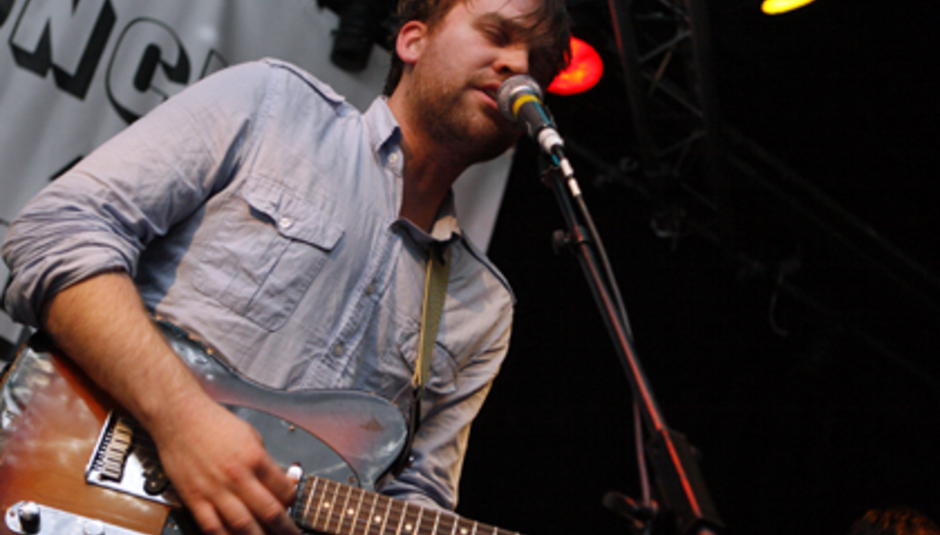 It's true that DiS has been no stranger to Frightened Rabbit over the last few months but it's been kind of a ridiculous year for this four-piece; a rapidly expanding fanbase, touring with Death Cab For Cutie, putting out (after pouring their all into making) their second record, Midnight Organ Fight with all it's urgency and emotion. Just before they took the stage at Newcastle's The Sage, DiS stopped by the dressing room of brothers Scott and Grant Hutchison to recap this year and check what's next for the fervent indie rockers and the charming Glasgow blokes behind one of this year's most inspired indie rock records. DiS: So, we've heard a bit about the Death Cab tour from your tour diary on DiS recently. It sounds like a pretty different experience from the dates you're on right now?

Scott: Oh, totally different; it was a completely different world that we were operating in from anything we've ever done before. It was great though, especially because it was just us two bands, not a whole three band bill. It's the first time we've had such efficiency on tour, there were stage times and sound checks and dinner and it was all meticulously planned. We were still managing ourselves, but yeah, it was interesting. It was a good learning curve as well. It did make it easier, having those rules in place, so we knew exactly what we'd have to do, because for the first few shows it was like their stage manager was training a dog or something [laughs]. But after a while, we learned! It was all amazing though, the crew and everyone. Not the ramshackle thing we're used to. The fans really seemed to like us as well; we sold lots of CDs and merchandise every night, and i think that's the telling thing, I mean, kind people are going to be kind and clap either way.

I imagine Death Cab's fan base would be pretty amazingly kind and polite.

Scott: Yeah! So polite. They weren't just being kind, they were even buying our CDs!

Grant: We sold ours for £2 cheaper than Death Cab's.

Yeah, it's all about the credit crunch and shit, really.

Grant: Exactly, we undercut them. We're pretty business-wise like that. [Laughs]

So with that tour having finished, it's been a pretty big year for you guys.

Scott: The biggest year, yeah. It's weird because it was about a year ago that the first album was re-released by Fat Cat, but that doesn't even come into it for us because we put that out a couple of years ago now.

The Midnight Organ Fight seemed very refined in a way, compared to the first. I've always thought of your music as a very refined sort of indie rock, in the terms of the way you have learnt how to channel emotion in such a raw way.

Scott: I guess it's all about, well, when my Dad makes macaroni cheese, he puts a little bit of mustard in it. And I always feel like the mustard in the macaroni cheese is like this motto you can have; it's the little things that people don't notice that make you what you are, and I think there are obvious parts in our record but a hundred other different things that don't necessarily jump out. That's where I feel like we've become good at achieving, there's a lot of mustard in the macaroni but not too much; you can't taste it but it makes a difference. We did work hard on it and getting the details and the progressions of the songs and the way that they moved, bringing it together as an album rather than just a collection of songs.

Grant: People connect with it quite emotionally; people have taken it to heart a lot of the time, I think.

It's an easy thing to do, I think; to be affected by it. For me it's this feeling of total honesty that comes out in the playing and the lyrics, sometimes almost awkwardly because it is so honest and quite genuinely seems to be you pouring your hearts out.

Scott: It is raw, for sure. The point of that is, I don't know if I'll ever be in the mental position, first of all, just from a personal point of view and my life, the last few years haven't been like that, so it's fine, but I was writing this record in my room, completely unaware of an audience. And also, we didn't really have one; Frightened Rabbit wasn't that popular and not listened to outside of our home town. So it was easier, in a sense to write something like that, because, well, I didn't assume that no one would really hear it, but I didn't expect the number of people to get hold of it as they did. It makes it much easier to be that personal when you're unaware of where it's going. In that way, it wasn't that difficult, but when it came out it was like "fuck, actually. And she's actually still around to hear it" [laughs]. It's a strange way of addressing it, as well.

Addressing the things in your life? I mean, is music a way of addressing personal things for you in some cathartic way? I would imagine you get asked that a lot actually.

Well, I don't know about catharsis. But yeah, I do get asked about it a lot and feel like I should be clear about that. It's more about...well, maybe it is partly about catharsis but more about putting a frame around that part of my life, rather than actually venting. It's more about making sense and tying it up and putting it into this nice package which then finishes it off in a way. I wouldn't say that when I write songs or when I sing them that there's some huge outpouring of that emotion or energy anymore. Also, I try to sort of semi-fictionalise some things, like making it a character, rather than me sounding like a dear diary entry, but giving things more of a beginning, middle and end.

It's been freaking me out a bit lately, wondering just how autobiographical characters in novels are, like, "did that actually happen to the author in real life?".

Scott: Yeah, totally, I know what you mean. I guess it doesn't matter, at the end.

You're always going to be writing from a certain unique situation anyway, so yeah.

Grant: I think that with music anyway, people often replace that character with themselves when they listen to it, and put themselves into that situation. You need to give them a way in, and there's lots of selfish music out there that doesn't let anyone in, and that's genuinely the sound of therapy I think, which isn't entertaining and it's not accessible either; too dark for words. Hopefully there's enough humour in the songs so it doesn't sound too self-obsessed.

Yeah, there are those funny moments on the last record, or, not necessarily funny, but just real human moments; foibles, quirks of the characters. So with your audience increasing, do you think that will change the way that you're writing? If it was this previously more secluded writing process?

Scott: Oh, yeah; there's no way around it. I try not to think about the audience too much but it's just in human nature that it's gonna be in my head, that this number of people are waiting for you to make this record. That's difficult to forget. At the same time, though, I'll hopefully be disappearing and going to the middle of nowhere to record it on my own. That might help with getting a certain privacy.

Okay, so that's how you go about doing an album; you write the songs and then bring them back to the rest of the band and work through them together, adding bits?

Scott: Yeah, so I'll try to get them as far as I can, and when I feel like that's not working and I've reached that stagnation point, it'll be time to bring in Grant on the drums. I've still not quite let go of control of that part of things; I'm not sure if i will, really.

I guess it doesn't have to be a bad thing.*

Is that true Grant?

Grant: [laughs] Well, I only play drums, so, when it comes to Scott adding guitars and keyboard parts, it's not really my field anyway. Songwriting isn't something I can do, and not something that...well, I don't mean to sound arrogant about that, it's not that it doesn't interest me, it's just I'd rather focus on what I can do with drums. I'm looking forward to recording that, though; touring is a good motivation for getting back home and doing some recording.

The Midnight Organ Fight is out now via Fat Cat Records

My Vitriol talk about album two, the ...