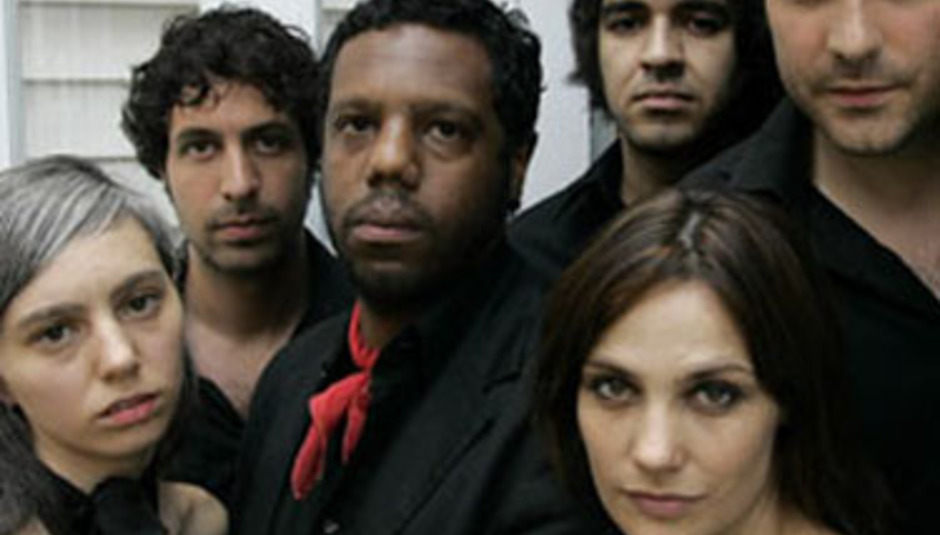 The Dears: "A tragic comedy"

The Dears: "A tragic comedy"

In this concluding instalment The Dears' singer Murray Lightburn talks about how the new album should be heard, reveals his love of sci-fi and declares his optimism for the future.

I've been listening to the new record, Missiles, a lot over the past few days. Every time I listen to a Dears album, especially this one, I hear as much scepticism as I do optimism.

The thing is you always have to listen to The Dears records as if they're a comedy album. That's what you really should do.

Yeah, Missiles is a comedy album. A tragic comedy. I understand why people sometimes think that The Dears records are super doom and gloomy but there's supposed to be a bit of humour in it. Sometimes things can get so bluesy that you have to laugh. But this record in particular is probably the bluesy-ist Dears album and not just because of what was going on with the band. There was some other stuff that was going on that I'll probably never really want to talk about, but if you listen carefully to the lyrics, if you feel like it, (muffled giggles) you can probably connect the dots and figure out “oh so that's what was going on!” But who knows who would, that's the thing.

I always try, when I'm sitting down to finely tune lyrics. I'll write out what comes into my head. It's always this constant battle; you write out everything that comes in and then you've got to look at it and you say, 'I can't say that', 'there's no way I can say that', 'THERE'S NO WAY I CAN GET AWAY WITH SAYING THAT!' So I'll do some editing. I'm the editor, I'm not the writer. So I edit the songs in a way I hope people will accept them.

A song like 'Money Babies' is kind of a silly song. I was walking the streets of a European town late at night. I was looking for milk for the baby and that song came into my head. Then all these lyrics came into my head about pushing the panic button. You know the situation; you have a panic attack and you try to calm yourself down? The song is about that anxiety. The way things have been going; the economy is getting really fucked up and there's a lot of uncertainty around us, I think people might have these little panic attacks. You know? I know I do. Hahaha!

What it means is taking away their opportunities, which can be looked upon as a political tune or just really like social statement or whatever. I don't know what it is about, all I know is that those words came into my head and I thought it was funny so I wrote them down.

Video: The Gospel According To The Dears - Part One

Just recording the stream of consciousness...

A lot of times it's like that. Probably the only real, serious song on the record, like when I'm really pouring my guts out, is probably Saviour. That's why it's last on the record, because hopefully it'll be so fucking destroyed by the rest of it that you won't really care. Hahaha!

Well I'll definitely have to go back and listen to it in a comedy light and perhaps read some Shakespeare while I'm at it...

How far are you viewing Missiles and any tour dates around its release as a possible rebirth of the band, or are you just going back to basics?

Well I wouldn't say a seven-piece band is going back to basics. Hahaha! But yes we are, I think as complicated as The Dears music can sort of seem difficult, what with it being layered or whatever. I think the approach to the work is simple and approach to what we're doing live is also really simple although my idea of simple is probably someone else's really, really complicated.

For me I feel we've simplified things quite a bit and it's like I said, I feel young again, like I'm in a new band. I don't think I'll be miserable on tour like I was on Gang of Losers but, and I know Natalia's really looking forward to touring.

Everybody right now is looking forward to doing the shows. We're doing a bunch of small shows just to figure out our bearings you know and we're just trying to take it one step at a time. It's kind of like a convalescent coming out of the hospital or something.

We were bruised up pretty bad on this last period and we're just walking again and we hope we'll be sprinting by the end of it.

Video: The Gospel According To The Dears - Part Two

I've publicly mentioned before that myself and Natalia had a similar task after we made our first album of building up this thing but at that time we were brand new so we didn't really know what the fuck was going on except that we figured out the things we needed to do and moved forward.

This time round it's kind of the same thing except we have a hell of a lot more experience and are able to get things done a lot quicker. The other about it is that it makes me feel…it's like that time at the end of 'Wrath of Kahn', when Kirk blasts Spook's body off out toward the Genesis planet and he says, 'I feel…young!' Hahaha! That's basically how I feel. That's a really great positive for me; I do feel young again. I'm thinking of getting a pair of leather pants and everything.

To read the first part of this interview click here.