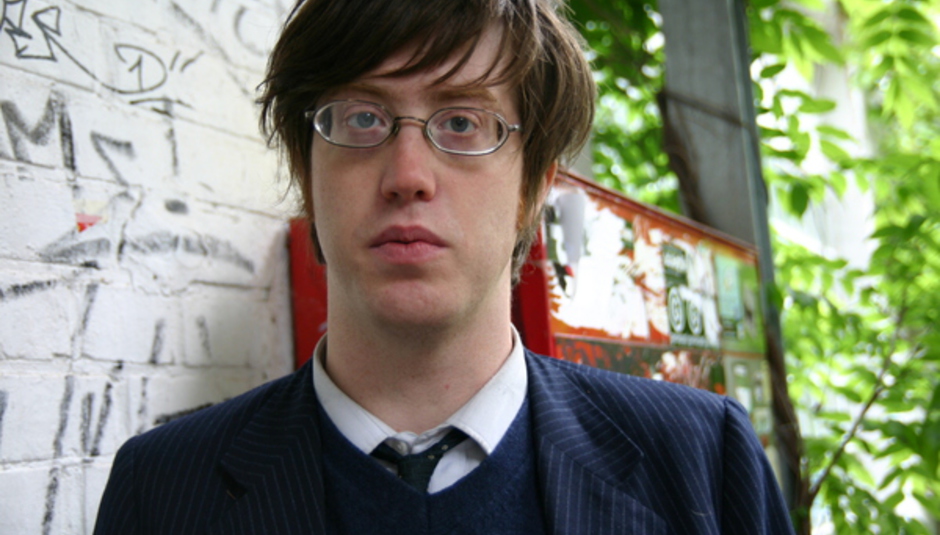 When we asked Will Sheff – enigmatic singer and lyricist of Austin troupe Okkervil River – to compile us a mixtape with some thoughts on his choices, we might have predicted it wouldn’t be a short one. What we might not have anticipated, however, is the sheer eloquence and depth of feeling imbued as he walks us through his choices, furrowing a path that stops by the disparate likes of Jay-Z, Lou Reed and Sandie Shaw before winding up at what pal Jonathan Meiburg calls “the emotional Altamont of Nina Simone.” Enjoy…

Curtis Mayfield – ‘Love to Keep You in My Mind’

One of my favourite Curtis Mayfield love songs in a huge and varied catalogue. There’s something so sweet and stoned and lush and late-night about this song, with its cascading lyrics: “Helping to keep this love I need feels so much like your touch divine, drinking and getting high on wine, wanting to love you all the time, just love to keep you in my mind.” This song feels how being drunk feels and how being in love feels (YouTube).

William DeVaughn – ‘Be Thankful for What You’ve Got’

The shortest 7 minute song ever recorded creates a warm, sinisterly lush world you never want to leave. Almost no one knows this song by its real name, they just know the “Diamond in the back, sun roof top, diggin’ the scene with a gangster lean” chorus. Which makes sense: it’s such an incredible chorus that one-hit-wonder DeVaughn, essentially a Curtis Mayfield surrogate, forgets all about his Curtis-style moralizing and basically falls into some kind of repetitive trance when he hits this chorus. It’s like he’s standing on the corner lecturing you about the sins of covetousness and then suddenly the “great big Cadillac” pulls up and he climbs in and takes off and leaves you standing on the sidewalk like a chump. The song suddenly turns into a smouldering jam, the bass drops out for what seems like forever, there are conga and vibraphone solos, and then that chorus comes back in like a mantra, over and over and over again and better each time, like sinking into those plush seats beneath the sun roof.

This track from Reasonable Doubt is often overlooked when people think about Jay-Z’s catalogue. It’s an excellent song that makes me feel something almost like what I get from “Be Thankful For What You’ve Got,” though maybe a little more watered-down. Like so many Jay-Z songs it beautifully describes and embodies what you want to feel out of life at its very best and most dizzyingly fun moments (YouTube).

Once the Stones figured out how to perfect songs in their classic sprawling-romantic-ballad vein (cf “Wild Horses”), they nailed it again and again and again on songs like “Moonlight Mile,” “Winter,” and “Angie,” just pretty much dialling up that ragged mournful macho vulnerability thing again and again and seemingly effortlessly. As the magic started to wear off later in their career, though, the seams started to show, as they do on this track from Black and Blue. But it’s still an amazing entry in the genre, my favourite “lost” Stones ballad. Ignore the cheesy synth-piano and wheedling electric guitars, this song is incredibly evocative and deeply moving, with its wonderful tradeoffs between Mick and Keith as they enumerate “Hannah Honey’s” charms and why both of them (!) are so sad she’s gone. Keith sounds both particularly pained and particularly hard to take completely seriously. Mick is doing that insincerity-turned-inside-out-to-where-it-sounds-super-sincere thing. When I get really lonely on tour and start feeling especially sorry for myself, this song hits the spot.

Sandie Shaw – ‘Sympathy for the Devil’

Sandie Shaw is almost completely impossible to take seriously when this song starts up. Over a kind of disappointingly faithful backing track version of the Stones original, she sounds frustratingly proper, a secretary trying to convince you she’s naughty and satanic and evil. The song has an almost Vegas-y air to it. And then the bass and drums dig in way harder than Charlie Watts and Bill Wyman ever did, so hard they start to draw blood. And Sandie Shaw’s shrill secretarial voice actually does start to sound weirdly diabolical. The arrangement stays extremely, almost brutally spare, everyone just starts pounding their instruments harder. By the end you’re a little more afraid of Sandie Shaw than you can imagine being afraid of Mick Jagger (YouTube).

One of the sweetest and most tender love songs ever, with Lou taking a walk through his own memory motel, both more run down and more homey than the Stones one. We get panoramic views of high-school football fields and locker rooms, of the dumpy sewer-like streets on New York, all looked down from heights scaled due to “the glory of love.” I find this song – filled with incredibly poignant nostalgia and disarming openness – incredibly moving.

Another song about childhood nostalgia and the past and things that are lost forever. The narrator of this song (translated from a hit by Italian superstar Adriano Celentano) tries to travel back from the squalid sewer-like streets of her city to the idyllic small town she remembers playing in as a child, only to discover it’s turned into just one more squalid sewer. A beautiful and meaningful parable about lost childhood and, passingly, about environmental degradation. In Hardy’s version, giant 12-string guitars and verdant bursts of strings evoke the natural beauty the narrator mourns the loss of.

Eno creates an unsettling, cold, barren sonic landscape, thinly woven out of woozy synthesizers, and, in half-whispers, explains how he’s sitting completely alone except for a tiny spider in “a world without sound.” He continues, “We knit a web to catch one tiny fly” and “we dream of a ship that sails…a thousand miles away.” It’s an extremely ambiguous song but it makes me picture the end of a world, when the forests have turned to squalid sewers and those sewers have finally just dried up and gone grey and everybody’s gone and all that remains is you and a tiny spider.

Then again, there’s something weirdly comforting about the song, and when I banish the end-of-the-world scenario from my head the song just makes me think of moments I’ve sat alone watching a spider weaving a web, and then moving in and taking off my glasses to look at the spider up close, as close as I possibly can, and thinking about how the spider has a kind of consciousness and I have a kind of consciousness and each of us is aware of the other inhabiting the same space but it’s almost certainly completely impossible for us to ever know or understand each other beyond that. The spider can’t know what it’s like to be me. I can’t know what it’s like to be the spider. One thing I can do, though, is not kill the spider. I guess, beyond physically helping the spider capture his (her?) fly, that’s the gesture of goodwill I can make that would establish some relationship between us. Then I start wondering if the song isn’t some kind of Buddhist meditation after all and not the doomsday scenario I pictured earlier.

Nina Simone has the ability to cover the very worst songs and, in the process, alchemically transform them into incredible songs. In this performance – which Jonathan from Shearwater pointed me to on YouTube calling it, “the emotional Altamont of Nina Simone” (it’s a performance from the 1976 Montreux Jazz Festival) – Simone begins this enormous cliché of a song by intentionally singing it in an off-putting robot voice. Then, after only about a minute into the song, she gives up on it entirely and stops playing. Nina Simone is not feelin’ it. Obviously distressed, she addresses the audience: “What a shame to have to write a song like that…I do not believe the conditions that produced a situation that demanded a song like that.” The audience applauds nervously. She scolds them, “Well come on, damn it! Clap! What’s wrong with you?” They applaud louder, nervously.

She starts the song again, imploring the audience to sing along. They don’t. In a consoling voice, more to herself than the audience, she says, “okay…” She figures playing an instrumental break will make her feel it more, so she tears into this tempestuous explosion of swirling piano notes. The drummer comes in, nervously. She tears the song back down to zero, gets overwhelmed and pulls her hands away from the piano, shouts into the air ad-libbed lyric “I wish I never lived this long! I hope this feeling never comes again.” Then she breaks into an incredibly rousing, traditionally satisfying chorus. Again she begs the audience to sing along, and, to my ears, they don’t. She tells them, “I’m going to let you go so soon, and so embarrassingly soft.” At this point, you can kind of hear half-whispery voices out in the audience, sort of half-singing along. It’s quite pretty, but you might be imagining it.

Simone breaks into an ad-libbed instrumental, deconstructing the song into some kind of Bach variation, before finishing with a lyrical coda of her own composition, possibly ad-libbed at that exact moment: “Here in my heart you’ll always stay. Here in my heart – no matter what the words may say. You will stay here in my heart, no matter what the day. You will stay here in my heart no matter what they say, no matter what they compose or do, no matter what the drugs may do, or songs may do, or people may do, or machines will do to you. I will always have my feelings. Nothing can destroy them. ‘Cause I know that that is all that there is at the base.” By the end of this incredible rant, she has stopped playing piano and is just waving her hands around and singing into the air. There’s a substantial, nervous pause once she stops, and then the audience explodes into wild, deafening applause. She starts playing again, almost obsessively slamming on the piano like a crazy little kid, then shouts “goodnight,” stands up, shoves the microphone out of her face, and storms offstage, like she just remembered she has somewhere else she has to be.

Okkervil River tour the UK and Ireland in November as below; their latest album The Stand Ins is out now on Jagjaguwar and reviewed here.