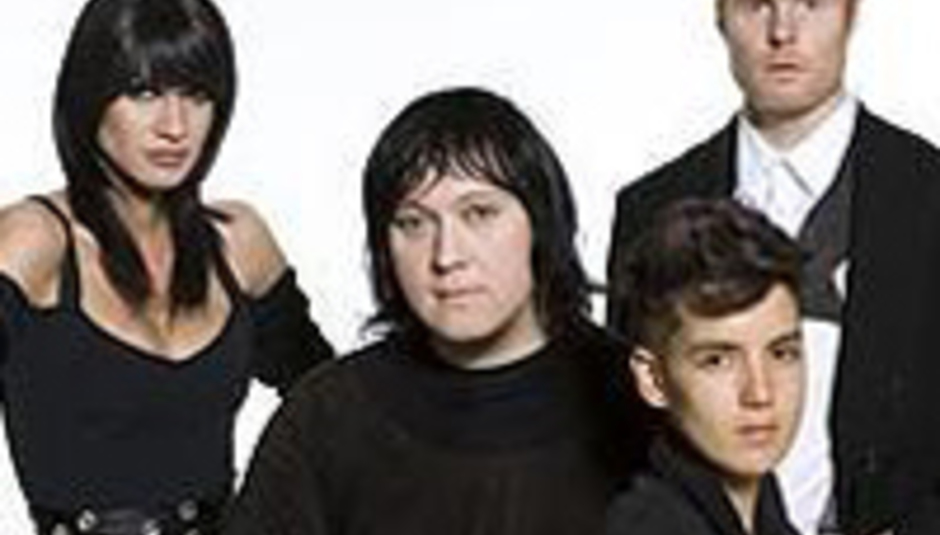 Hercules & Love Affair is 29-year-old New Yorker Andrew Butler, (back right). The DJ and producer surrounds himself with a small system of stars - Antony Hegarty, (of ...and the Johnsons fame), as well as ascendant art-world friends Nomi and Kim Ann, providing vocals for a self-titled debut album that draws on all types of disco, nightlife, Chicago house and Greek Mythology as its main intoxicants.

DrownedinSound called Butler in SoHo as he prepared to head back to his Brooklyn studio to continue work on the B-side for the 12" release of next single 'You Belong'.

“It’s very complimentary – I don’t really know what to say when someone says that because I hold those artists from that era and just after too, like early house music… I have such a high reverie for all of them, it’s super flattering.”

There’s a pause, during which I wonder if it’s really possible to hear an ashen face coming down a sub-Atlantic telephone line. I’ve just compared ‘Time Will’, the delirious opener from Hercules & Love Affair’s self-titled debut album, to the work of one of New York disco’s most mythical and Andrew Butler is, obviously, “super” flattered.

“_Arthur Russell and the spirit in his music is something that is appealing to me. I find it really beautiful.”

If it seems wrong to begin with a dive headlong into reference points, it shouldn’t. The man at the helm of Hercules has his heroes, and while you suspect that the late cellist, disco pioneer and Talking Heads conspirator stands not least among them, even Russell, the returning prince of New York, is trumped by the idol Hercules & Love Affair is named for.

“It directly relates to my childhood experience,” recalls Butler. “I was obsessed with Greek myth when I was growing up, so I named the band after one story about Hercules that I loved and studied a lot in school, first as a kid and all through college.”

‘Childhood’, ‘school’, ‘kid’, ‘college’… despite repeated references to the “formative young adult experiences that shaped who I was” Butler is wary of being cast as some nostalgic goon. Which you may think odd, given that a large part of what the 29-year-old does is, by his own admission, indebted to fables written almost 3000 years ago. His salvation came with early forays into the clubs, a twin passion nurtured in the early ‘90s by Todd Terry’s sample-heavy house that introduced Butler to the “crazy sounds_” of Russell and gave him an arena in which to play out those distant, ancient fantasies as modern-day realities, dragging Hercules & Love Affair into the present.

Butler confesses to a fascination with "the mystical and the debauched component" of dance music, and the relationship that exists between the "ecstasy in ritual and the ecstasy that’s achieved on the dance floor". For him the tension between the two things that've come to define his music offer a chance "to look back at who I was in my original state" when the fixation with Greek mythology was, you'd imagine, a more mysterious, innocent one. It's that grinding play-off between the then and the now that drives Hercules & Love Affair to some indeterminable point in the future and gives Butler the chance to "carry that person_" of his youth around with him. His music is all the fresher for the ability to do that.

and we could only get closer

leaving this darkness behind... _

"_I wish the light could shine now for it is closer...
it will not present my present

and it makes my past and future painfully clear"_

“I knew that through house music there’s a little trend where they would call themselves Hercules or Adonis or tracks would be named after Greek myths, so there’s stuff that inspired me from the club scene as well. It wasn’t just, ‘Oh, I’m going to drop all this stuff from my childhood in.”

Does Butler aspire to those influences at all? Which character from Greek mythology does he see himself as?

“Oh gosh, I don’t even know. That’s a hard one. I think that just being a human being I always relate to the characters that pursue something tragically… when there’s a tragic flaw involved or that humanity is really made obvious at the end of every story. Sometimes the heroes excel and sometimes they’re pretty impressive people, [but] it’s the tragic flaw thing I probably most identify with._”

Butler’s tragic flaw? Many have tried to pin Hercules & Love Affair as a faddishly camp disco revival act, dripping cheddar across dance floors ‘til morning before expiring, even if Butler expresses that the intention was to make his debut album “equal parts listenable and danceable - it’s important to me that the music should inspire people to move or whatever, but it was also important to make something really enjoyable, to have it remain song-orientated._

“Music serves different people at different times,” he continues. “I’m moved by the banging rhythms in the club but also by the softest of soft music in the house.”

Redundant words – with the dawn, so the modern scrolls say, comes the end of Hercules and the end of the Love Affair; the hero felled by daylight, the fatal flaw of the twilight economy Butler’s music is inextricably tied to. But Butler knows this and it’s his utter willingness to surrender himself to the night that sets his music above and apart.

The songs are strong enough to survive the dawn chorus even if their creator isn’t. Butler’s all guts and brains and heart and human after all, and, despite the fleeting moments in his life where, caught in the creation of his own thing, he may scratch at the greatness of his mythological heroes, he’s still real and drawn by the downward tug of serotonin and depressants. The music that comes from in and around those organs isn’t, though – it seeps into the walls and the sticky floorboards, evaporates into the thick air of the club, condenses on the blacked-out windows, stains leather sofas. And to recall it into existence? You just need to whistle, a pair of headphones or a play in some dingy cellar bar, creeping up into the street in looms of bass or dazzling treble carried off on the early hour breeze. They’re just a collection of notes and notes last forever. And under the guard of the music’s omnipresence, Hercules & Love Affair move from stoop to stairwell, revelling in the damp-eyed lust for hedonism that’s not supposed to arrive until the night of your 18th birthday, drunk on hallucinations of their own timelessness.

“There’s usually something that I’m after,” says Butler when I ask him why and how he works. “Like a recollection or an emotional experience – I guess it’s just a process of holding that in mind probably, for all people involved. Just wanting to know what’s the emotion I’m after here, what’s the spirit that I’m pursuing – if you can invoke and tap into your own experience, then… it’s very personal for me, it’s not so much external…_”

More a kind of internal imaging?

“It’s not very allusive, it’s pretty direct,” he says before launching into an explanation of how he directs his singers.

“I’m often like, ‘It’s rude and it’s very practical, a very real and emotional experience that I had – if you could try to pursue something similar for you when you’re singing on this’.

“Like on _‘Athene’,”_ he says, before reverting back to the third person.

“‘This song was written as an homage to my imaginary childhood goddess, someone who was really important to me when I was a little kid so I’d really like it if when you sang this you sang it as a prayer to her. Invoke a goddess; invoke what’s magnificent about a ritual or a prayer. Sing this for her, sing this to her, bring her to life. That’s the intention of the song.’”

Butler’s instructions to Nomi keep him at the centre of that song. When the DJ, traditionally peripheral to club-land proceedings, shares ‘Athene’ with his friends and sends it out into the New York night, the invocation of a higher being sees him, in effect, acknowledging his own mortality, hurtling along with the song into the dawn comedown that’ll kill him like a pilot flying into the sun.

“Oh, what my fatal flaw is? I don’t know yet, but I’ll talk about it for another ten years in therapy. Like, ‘My god, this is it, this is what’s been driving me the whole time’. You know what I mean? I like that.”

May as well self-destruct ‘cause here comes the chemical crash; a clean slate and no nostalgia, even if every song here recalls New Order, Streets of Rage and Russell. In what we are constantly warned are the end times, euphoria is endlessly manufactured into inevitability, the past lost with memory cells every night as revellers take the power back by ramming it down their own throats, a generation of club-kids swallowing their own fists in the glee of self-destructive protest, every weekend a dress-rehearsal for an apocalypse we’re told is coming on a basis so regular it borders on the pornographic. Nostalgic? The world can only truly end once, can’t it?

“I’d love to work with a really great voice that is up to singing spiritual and gospel music,” says Butler when I ask him about the future. “I think I would have a field day with it, I’d really love it. In general those artists are already used to singing songs of praise and singing songs of reverie. I would just love to capture or pursue it with an artist like that.”

We’ve followed the loop all the way back to reverie and it sounds like Butler’s trying to ascend to the gods. Is there hope? Just listen to ‘Blind’s bass strings snapping up on the offbeat, springing from the fret board, every rhythmic pinning an upward inflection throwing up dozens of new questions.

The album Hercules & Love Affair is out now on DFA/EMI; find the band on MySpace here.