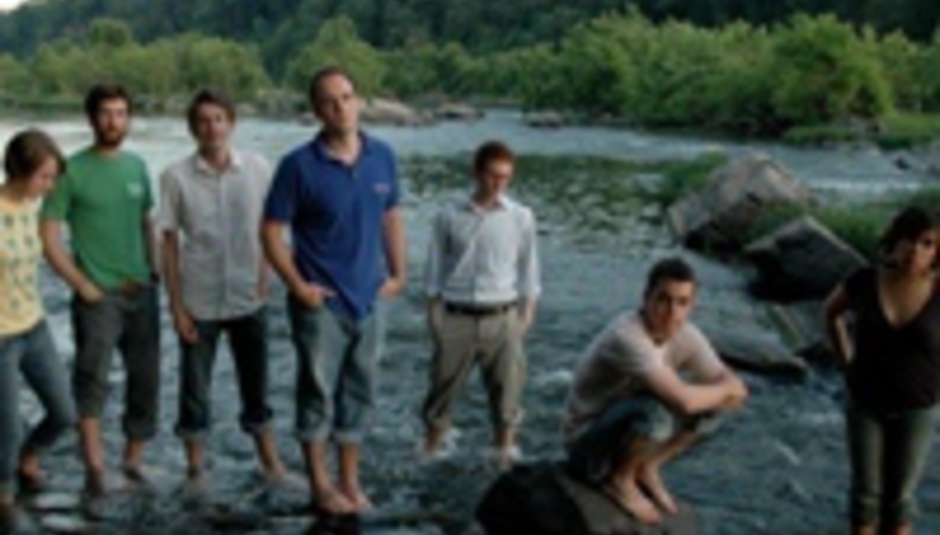 Le Loup’s music is as bi-polar as its core creator. On imminent debut album The Throne of The Third Heaven of The Nations' Millennium General Assembly we’re drawn into a bittersweet labour of love that layers escapist lyrics over dramatic melodies. Helmed by the reclusive Sam Simkoff, in one breath the DC-based band deal with the torrid subject of getting your affairs in order before the inevitable fall from the mortal coil (‘I Had A Dream I Died’) and in another preaches the benefits of always aiming upwards (‘To The Stars’). It's a triumphant collection of songs that revels in rich imagery and instrumentation.

A tired and sweaty Simkoff answers our DiScover questions.

You've just finished your first headline tour of the US. How did it go?
The tour went swimmingly. I don't think any of us had ever been that far south, and it was a definite change of pace for us. You'd think touring with a band would provide all sorts of good crazy stories but we certainly lose in that realm. The wildest thing we did was sneak seven people into a two-bed hotel room. Laaaaaaame.

James Hampton’s multi-textured sculpture The Throne is a huge influence on your album. What were your first experiences of his work?
I didn't encounter The Throne until I moved to DC a little over a year ago. It was in the folk art section of the National Museum and it struck me as being the most arresting piece of work in the entire building. I couldn't stop thinking about it. The work continued to strike an emotional chord throughout the process of putting the songs together into an album. The sheer strength of faith that drove Hampton, that trust that he was doing something important, that love for his God turned the work itself from just some quirky piece of culture-junk into something really beautiful. It made me feel so good I jacked the title.

Parts of the album sound very melancholic, were you going through a rough time when were making it?
Getting out of college was incredibly disturbing to me. Leaving school with no inkling of what you want to do, what you want to be, where you want to go, having no rudder at all is not a pleasant feeling. I've always filtered the world through music, and when I get anxious, that's just kind of how I deal with things - condense it down into a form I can understand. That tends to produce some pretty heavy-handed stuff.

But there’s a definite optimism there too, right?
Most definitely. I think it's really easy to listen to a few of the songs and think, "Okay, fine, end-of-the-world, doom and gloom, heard it”. But very little of the album is actually about that. ‘To The Stars’ I think, is a very hopeful song. I view Le Loup as sort of triumphant especially the parts where all the imagery set up by the lyrics is obliterated by wordless humming and piles of instruments.

You write the music yourself, but play with an additional six members onstage. Was this integral to making the multi-layered sound of Le Loup work onstage?
I’d done a lot of recordings with friends but I’d never been allowed quite the amount of freedom that I got from just holing myself up and doing exactly what I wanted - no second guessing, no careful revision and it felt great. I guess I could have done it alone onstage with a laptop or something, but that kind of loses its punch. For me, a live show ought to be theatre with lots of hyperbole and over-the-top drama.

Has your outlook on life changed since the formation of Le Loup?
Without a doubt. Going from recording stuff by yourself in a bedroom to touring with six other people to promote an album is gonna change your viewpoint a little. I always felt like I didn't know what I wanted to do with my life, but I knew I'd always have music, at least as a personal comfort. For the two elements to be one in the same - job description and passion - is something I think is rare enough to be treasured. Of course this might mean terrible things for the music - how am I supposed to write solid songs if I’m happy all the time? My bandmates have joked that they're going to start making my life a living hell - kidnapping family members, poisoning my pets - so I get nice and depressed and start writing more heartfelt songs.

You’ve been heavily feted on the blogosphere. What do you make of the attention?
If there's any buzz surrounding the record, good or bad, it means that people care on some level, which is more than I could have asked for, but I still feel like an outsider. I still feel like I’m guarding this fantastic secret.

The Throne of The Third Heaven of The Nations’ Millennium General Assembly is released Dec 3 on Memphis Industries. For more information visit Le Loup’s MySpace page here, and listen to them at Memphis’ site here.